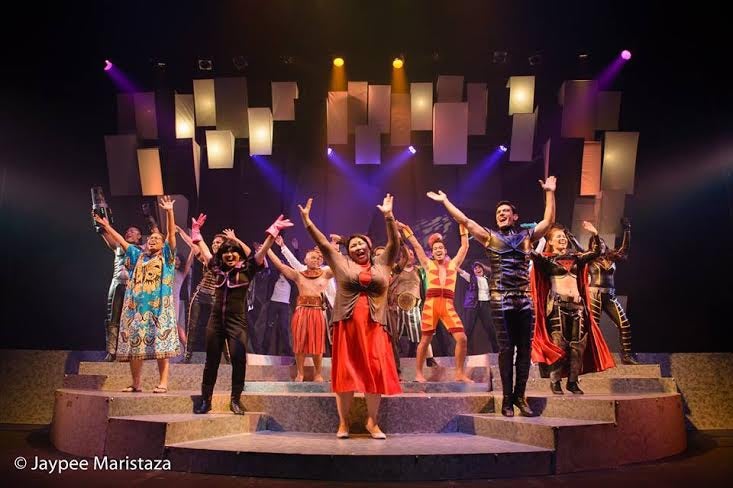 For a musical to publish its own original soundtrack on its first run, the producers must have great confidence in the material. It must be something that the audience would want, an audio souvenir of their experience that night.

Many years ago, the producers of “Larawan, The Musical,” which is being made into a film, had such confidence in their material that they were able to publish almost the entire libretto in two-cassette and two-CD formats.

It is apparently with the same confidence that the producers of “Kung Paano Ako Naging Leading Lady” have put out a two-disc recording of the brand-new original musical written by Carlo Vergara, with music and lyrics by Vince de
Jesus. The album features the alternate casts of the musical’s original run last May at the Peta Theater Center.

The quality of the performances on the record is notable. The singing of the two leads, Bituin Escalante and Frenchie Dy—who alternated as Mely, the maid whose life was transformed by her work for a group of mestizo superheroes—draws empathy from the listener.

The role of her sister, Viva, who is dragged into the struggle between good and evil, is sung with aplomb by Kim Molina and Natasha Cabrera.

The bulk of the memorable themes in this musical was written for these sibling characters, and they deliver—both on stage and in this recording.

For me, the breakout performance in this production was rendered by Giannina Ocampo, in the role of Nena Babushka. I had not seen her in musical performances, and her last role before this was in the drama “Time Stands Still.”

Her work in this album is an eye-opener. Her solo numbers are some of the most beautiful pieces in the entire score, doing justice to her character’s hidden emotions for Leading Man.

I have mixed feelings about Vince de Jesus’ music for the play. I appreciated how, for example, he was able to use both structural and melodic leitmotifs for key characters and factions (the villains’ pieces were often echoes of each other, for one). However, the mixture of genres can be both a bane and a blessing.

Some plays work with such an overt mix of genres, with the hodgepodge aiming to break the monotony. But sometimes it can go too far. Perhaps the challenge for another musical writer, and I am sure De Jesus has pulled this off before, would be to come up with a score that evokes a consistent tone and sound that instantly becomes the play’s trademark.

I also feel that where the musical does not seem to work, structurally, becomes even more apparent in the recording. My biggest concern when I watched the play was that it ground to a halt at least twice in the first act to perform lengthy feats of character exposition.

On the album, without the costumes or the staging, the time it takes to talk about superhero teams or mysterious chemicals becomes even more tedious.

The play needs more tightening, so I hope that the second run, now ongoing at OnStage Greenbelt in Makati, is a version that flows more smoothly while being as entertaining, if not more so.

Anyone interested in musicals can always benefit from an awareness of the history of how a play evolves and whether the changes help or hurt the material. So, all in all, the time, effort and money put into  a cast recording of “Leading Lady” remains a laudable effort.

It is valuable for those who have seen the play, and it is also a good document of an effort to create an original musical production we can call our very own.

Ren Aguila occasionally contributes to the music website Vandals on the Wall.