Memories of the Met | Inquirer Lifestyle 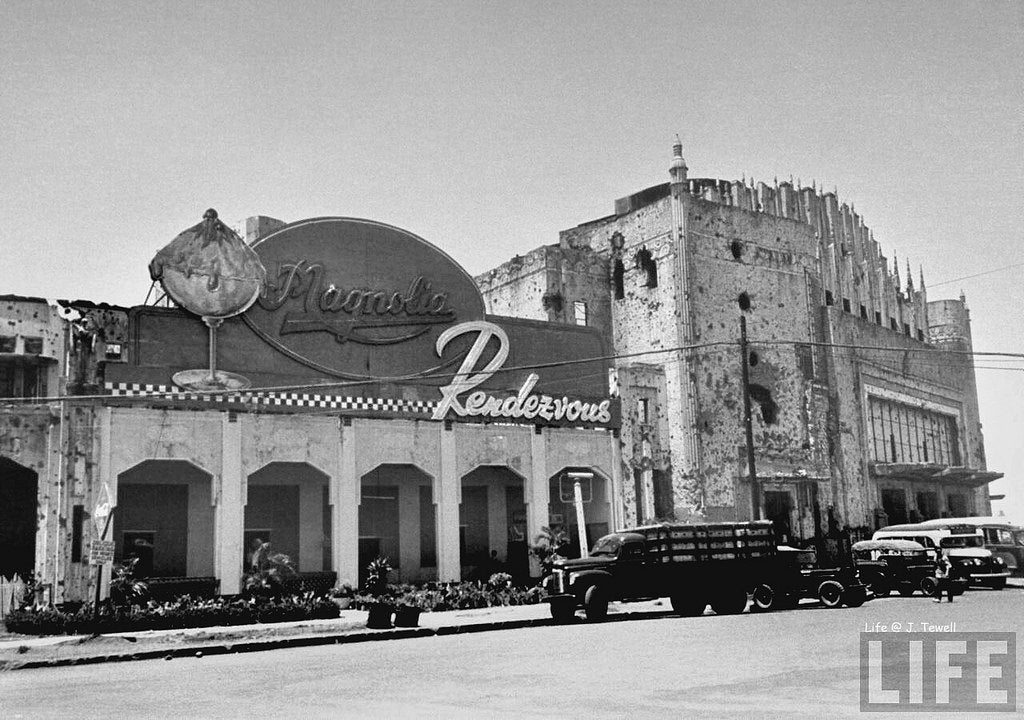 Memories of the Met

ERECTED in the early 1930s, razed by World War II, rehabilitated and restored in the late 1970s, and neglected once more in the late 1990s up to the present time, the Manila Metropolitan Theater may yet rise again after its acquisition by the National Commission for culture and the Arts.

The sight is  gory and indescribable when you pass by the Met Theater these days.

Both the front and back entrances are littered with garbage and beggars surround the walls at night.

Said Budget Secretary Butch Abad, following the fund release to NCCA to acquire the building from the Government Service Insurance System: “We cannot claim to pursue national development if we fail at preserving our culture and heritage. Aside from supporting the arts, the restoration of the Met also serves the dual purpose of boosting our country’s tourism.”

With just over 200 days before a new administration takes over, it follows that we will see a new Met in the next dispensation.

This was an offshoot of the film festival controversy, when Tinio and everybody else in the jury raved about Celso Ad. Castillo’s “Burlesk Queen” and dissed Brocka’s entry, “Inay.”

I begged Brocka not to make a scene, because Caballe was a world-famous personality, and the scandal would surely make headlines not just in Manila but also in the international press.

Just to keep the Met alive, its executive director “Tita” Conching Sunico agreed to rent out space to “Vilma!,” the Channel 7 variety show of Vilma Santos.

It also had to rent out office space even to recruitment agencies sending japayuki—euphemistically called “cultural entertainers”— to Japan.

It was bizarre seeing classical musicians mixing with japayuki applicants, whose audition music could be heard on the second floor while an audition for Mozart’s Requiem was going on.

I recall Herbert Zipper telling Tita Conching to do away with “Vilma!”

“Maestro Zipper,” Sunico told the Manila Symphony Orchestra founder, “I have a theater to maintain and employees to feed. If you promise to maintain this theater and feed my staff regularly, then I’d do away with that TV show. But right now, the rentals are all we have for revenues. You have all the right to protect Mozart but I also have to protect my employees.”

It was a classic repartee between art and commerce. And it reminded me of a scene from Nick Joaquin’s “Portrait,” where the spinster sisters (Paula and Candida) were forced to take in boarders and advertise piano lessons to keep body and soul together.

Zipper’s last Met concert in the 1990s played Mozart’s Requiem, which was itself ominous. The concert was an artistic success but it did not resuscitate the MSO. The donations didn’t come and the patrons’ pledges never materialized.

When the Met opened on Dec. 10, 1931, almost 85 years ago, 1,670 music lovers were in attendance and heard the country’s first and most celebrated violin prodigy, Ernesto Vallejo, play Albeniz’s Tango. Soprano Montserrat Iglesias sang two arias from “Samson et Delilah” and the Manila Music Academy under Alexander Lippay played the Coronation March from Meyerbeer’s “The Prophet.”

There was a talking picture (remember this was the era of the silent film) with opera singer Tito Schipa of the New York Met singing selections from “Martha” and the Spanish ballad “Princesita.”

The Met’s Golden Age peaked in the 1930s, with the visit of Italy’s top diva, Amelita Gulli-Curci, and violin legends Jascha Heifetz and Frtiz Kreisler, among others.

Among the outstanding operas mounted during the late ’30s and the early ’40s was Gounod’s “Faust,” staged by Compania de Opera National under Bonifacio Abdon as director Verdi’s “Rigoletto” was presented by the Musical Philippines Inc., under Jose Mossessgeld Santiago-Font as director; Puccini’s “La Boheme” was staged by Jovita Fuentes. “Tosca” was directed by Ramon Tapales, also of Musical Philippines, Inc.

“Faust” was a landmark opera at the time because it starred the country’s foremost bass baritone Santiago-Font, the first and last Filipino bass baritone to sing at La Scala di Milan.

Santiago-Font also sang Ramfis in “Aida,” opposite Angela de Gonzaga in the title role, also at the Manila Metropolitan Theater.