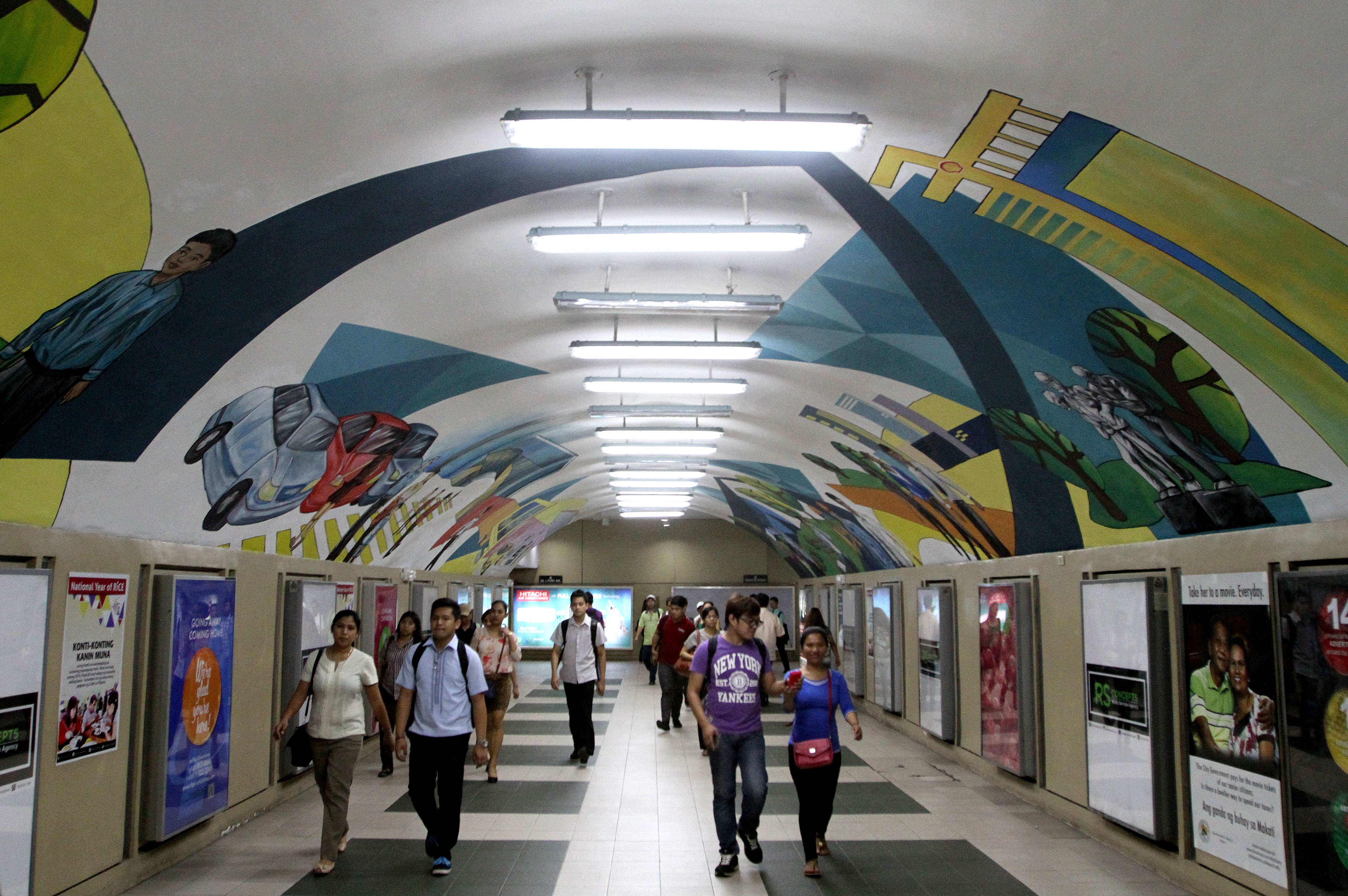 THE DEVELOPMENT of the "murals" for four underpasses in the Makati Central Business District is part of the Makati Commercial Estate Association's push for the "pedestrianization" of the city. PHOTOS BY RICHARD A. REYES

AS FAR as art openings go, the recent unveiling of four Makati underpass murals was refreshingly free of irony, as well as the usual mad scramble for the open bar and the hors d’oeuvres.

In fact, it resembled nothing so much as a marketing presentation for a new ad campaign which, for all intents and purposes, it was.

Each of the four murals had a different corporate sponsor: Nestlé for the Sedeño underpass, Security Bank for the Paseo de Roxas underpass, Shell for the Salcedo underpass and Rizal Commercial Banking Corporation (RCBC) for the Rufino underpass.

The process of creating the murals was also very much ad-like: creative teams—in some cases from actual advertising agencies—were assembled to brainstorm, come up with a concept, pass it up through the usual chain of committees for approval and execute the final design.

The collision of art and advertising has of course been one of the central themes of postmodern culture, at least since Andy Warhol painted his Campbell’s Soup cans and Brillo boxes in the early 1960s—coincidentally the golden age of advertising celebrated in “Mad Men.”

Time has dulled pop art’s ironic edge, however, and its critique of consumer culture has grown more and more ambiguous as advertising becomes omnipresent in the media-saturated world that we now inhabit.

The corporate invasion of public space (which is also one way of looking at the underpass murals) has also advanced at a relentless pace, with every visible surface in the urban landscape now being seen as a potential medium for messages selling products or ideas.

The debate as to whether advertising can be art is still controversial. Some critics now consider advertising the modern age’s true vernacular art form. Even those who say advertising can’t be art (mainly because it serves a commercial purpose) admit that ads can be aesthetic artifacts and works of creative expression. In any case, pop art has all but obliterated the divide between “high art” and “low culture” by drawing inspiration from consumer and celebrity culture.

As one character in Aldous Huxley’s “Brave New World” says: “You’ve got to choose between happiness and what people used to call high art. We’ve sacrificed the high art.”

Sponsored by Nestlé and developed by a creative team from J. Walter Thompson, the Sedeño underpass mural is perhaps the most overtly “ad-like”; it even incorporates the tagline “everyone deserves a break” that echoes the famous Kit Kat chocolate line “have a Kit Kat break.”

The RCBC mural for the Rufino underpass was developed by an in-house creative team and illustrated the bank’s financial products and services, with an emphasis on the company’s “green” projects and its corporate social responsibility programs.

Likewise, the Shell mural for the Salcedo underpass illustrated the company’s operations, including its chain of service stations and the Malampaya natural gas project which the company operates. To create the mural, the company enlisted the services of 10 previous winners of its annual art competition.

The Security Bank mural for the Paseo de Roxas underpass created by graphic designer Daniel Tingcungco showed various young people reaching for their dreams as a rocket blasts off from the Security Bank building, illustrating the Security Bank Foundation’s institutional thrust which is supporting education through scholarships, teacher training and classroom building.

Ostensibly, the development of the “murals” for four underpasses in the Makati Central Business District was part of the Makati Commercial Estate Association’s (Macea) push for the “pedestrianization” of the city.

“We want to promote the city’s walkability by enhancing the pedestrian experience of Makati,” said Dave Balangue, president of Macea.

“The underpass murals will make walking more pleasurable for the 300,000 pedestrians who pass them daily,” went the press release for the event. “Moreover, beyond aesthetics, efforts such as this create an opportunity to let people be aware that creating pedestrian-friendly walkways makes a great livable city. Quite simply, people will become more inspired and uplifted as they traverse to work or to the diverse establishments in Makati.”

In fact, the murals are just part of a larger campaign by Macea and Ayala Land, Inc. called “Make It Happen, Make It Makati” which is intended to “strengthen Makati’s position as the leading city for business, lifestyle, entertainment and culture.”