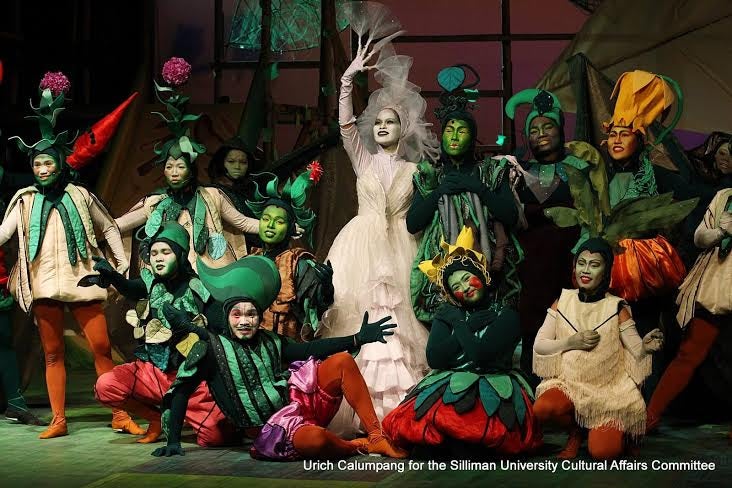 WHY IS the ampalaya bitter? Why is its skin wrinkled?

When Augie Rivera, who was head writer for the defunct TV children’s show “Batibot,” wrote “Ang Alamat ng Ampalaya” (The Legend of the Bitter Gourd) for the University of the Philippines National Writers’ Workshop in 1995, he sought to engage the imagination of children aged four and above, and to transport them to a paradise where vegetables of all sizes, shapes, colors and aromas play Filipino street games, while warning them of the dangers of envy and greed, and teaching them love, compassion and forgiveness.

Rivera wrote his own legend about the bitter gourd because it was not included on the lineup of vegetables enumerated in the childhood song “Bahay Kubo.”

The story was adjudged Pinakamahusay na Kwentong Pambata (Best Children’s Story) in the workshop, and was launched as a book at the National Children’s Book Day in July 1995. Kora Dandan-Albano illustrated the book.

The book has had reprints in various forms: newsprint, bookpaper, glossy; hardbound silver, and big book.

“Alamat ng Ampalaya” is one of the four all-time bestselling storybooks of Adarna House. Ampalaya is one of the 25 Best-Loved Children’s Book Characters, according to a survey by the Philippine Board on Books for Young People.

The book has evolved into various genres. In 2000, it was presented as a children’s operetta by Iskuwelahang Pilipino—a cultural school in Boston, Massachusetts—where Filipino-American children learn the Filipino language; play the banduria, violin or cello, and act and sing.

The full-length musical adaptation debuted in September last year at the Claire Isabel McGill Luce Auditorium in Silliman University. An updated version was staged in Dumaguete on July 3-6. Audiences in Manila will have the chance to catch “Ampalaya: The Musical” at Tanghalang Nicanor Abelardo in the Cultural Center of the Philippines (CCP) at 3 p.m. and 8 p.m. on July 15

In “Ampalaya,” a hairy, bland and pale/colorless gourd named Ampalaya wanders to Sariwa and finds the most colorful, fragrant and nutritious vegetables playing games in a beautiful garden.

Envy creeps into Ampalaya when she notices the striking individual characteristics of the other veggies; everything she is not. She waits until all the veggies are asleep and steals a little bit of everything from everyone: the color of Kamatis and Talong; the spice of Luya, the aroma of the Bawang sisters, the sweetness of Kalabasa, the crunch of Labanos, and the punch of Sili.

Shocked to find all their best gone, the vegetables seek help from a wise old Nuno sa Punso, the Ubodman sa Saging (Ombudsman, get it?), and before her jury of diwata, plead their case. Ampalaya is tried and the verdict transforms her.

“Ampalaya: The Musical” is produced by the Cultural Affairs Committee of Silliman University. It is an all-Dumaguete production that features the city’s artists and cultural workers.

It is directed by Dessa Quesada-Palm, Elizabeth Susan Vista-Suarez is the musical director

Original music and lyrics were done by Michael Dadap (with additional lyrics by Patty Yusah and Jerry Angelo Catarata).

UP Philosophy graduate Dadap moved to New York in 1971 and studied classical guitar at Mannes College of Music, then composition and conducting at the Julliard School of Music.

He is the artistic/ music director and has been the principal conductor of the Children’s Orchestra Society in New York since 1984. A strong advocate of Filipino folk music, he is the founding music director of Iskwelahang Pilipino Rondalla.

Although the stage musical is a Western invention, “Ampalaya” has a very distinct Filipino sound because of the banduria.

The musical is a visual treat, thanks to Gawad Buhay awardee Carlo Villafuerte Pagunaling (“Rak of Aegis”), who designed the fabulous costumes.

It was such a delight to see fireflies joining the vegetables, carrying glasses with candles, and dancing the Pandango. Later, audiences would be treated to the Rigodon and Balitaw, choreographed by Angelo Sayson.

Having been away from the Philippines in the last four decades, Dadap appreciates “Ampalaya” for anthropomorphising vegetables.

“Once upon a time, we were children. The characters of the musical will remind people of their childhood. Children are brutally honest. They say mean things, but they forget. They do not hold grudges; they forgive easily. Those who never forget become miserable people,” he said.

He was born the 13th among 14 siblingsin Hinunangan. Leyte. “I grew up in the province. We ate vegetables raw from nearby bushes and the mountainside. We ate anything in sight,” he said.

Dadap knew about vegetables: “Kamatis is smooth outside. It is extra sensitive [and if it were a person], needs assurance. Ang onions paiiyakin ka talaga. Ampalaya, the ordinary gourd, has no taste, but it is an interesting mix of everything.”

Referring to the main character in the play, he said, “The ampalaya never really liked [her] self; she is insecure and jealous. There’s an ampalaya in each one of us.”

This updated musical has a back story: Ampalaya was abandoned by her mother, which has left a deep scar in her heart.

“There are so many abandoned, wounded souls,” Dadap said.

It would be great if Department of Education officials could watch the musical, and, consequently, this production could be toured all over the country.

Apart from promoting Filipino street games, folk dances and music, it endears vegetables to the audience. It also tackles bullying, and educates audiences on the values of uniqueness, justice, love, compassion and forgiveness.

It is the book’s 20th year this month, and it is “but fitting that the anniversary be celebrated with a children’s musical,” Rivera said. He will be signing copies of new editions of the book during the Manila run of the musical.