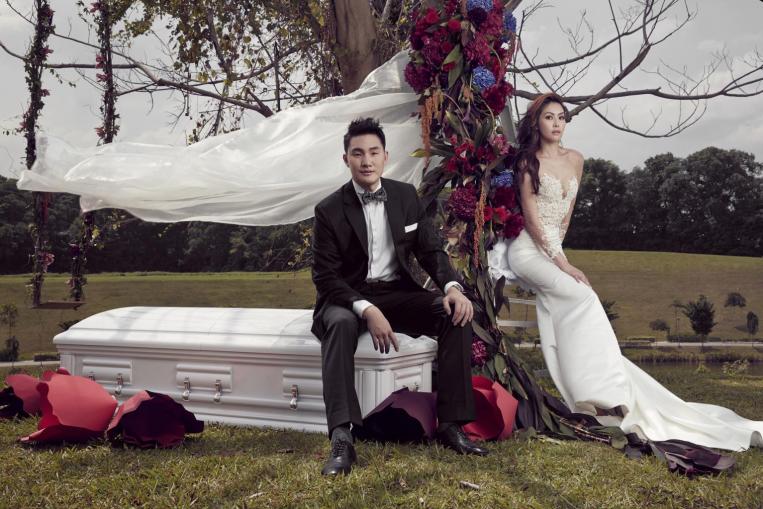 Their lives are inextricably linked to their profession so Jenny Tay and Darren Cheng decided on wedding photos featuring a casket as a prop. PHOTO: JENNY TAY

SINGAPORE — It is a beautifully shot wedding photo. The setting is verdant, an open field with old gnarled trees and lush foliage. The gorgeous bride is in a stunning burgundy taffeta gown, the handsome groom in a crisp white dress shirt.

But wait, is that a white coffin they are sitting in? In another shot, the tuxedo-clad groom is sitting on the same white coffin while, next to him, his bride oozes sexiness in a lacey white gown.

Many people will cringe and cower but Ms Jenny Tay, 29, and her fiance Darren Cheng, 30, have opted for a casket as a prop in a series of pictures taken for their wedding in October.

Their reason? They are dead serious about their profession and their wedding. Both are in the funeral trade.

“Our business is very much a part of our lives,” said Tay, managing director of Direct Funeral Services.

“When couples take wedding pictures, many of them think of something significant and meaningful to them – their favorite cafe, the place where they first met.”

The Buddhist added: “Both of us are very passionate about our jobs, so I thought, why not?”

Tay is the daughter of Roland Tay, 70, a colorful undertaker well-known for arranging free funerals for murder victims, the poor and the destitute.

Her husband-to-be was initially taken aback by the idea of coffin-themed wedding pictures but came around quickly.

“I am not superstitious and it makes sense,” said Cheng, a free-thinker and the company’s operations and business development director.

“In some cultures and religions, death means life and rebirth,” added the former counsellor, who has a master’s degree in counselling from Melbourne’s Swinburne University of Technology.

The pair have taken over the business from Tay and have been working at Direct for two years. They are on a mission to modernize and professionalize the trade and remove the taboos associated with death and funerals.

Cheng has also written a book for children, Where Did Grandpa Go, to help them understand what happens when loved ones pass on.

A former account executive with a Japanese advertising firm, Tay knew exactly what she wanted for her wedding album.

“The pictures have to be tasteful and not morbid,” said the business and marketing graduate from the University of New South Wales. She added that she would not be displaying the pictures at the wedding reception.

She sounded out photographer Joel Lim, a commercial lensman who recently shot campaigns for Ion Orchard and Lane Crawford, a department store in Hong Kong.

Lim said: “When she told me about it, I thought it was different, very cool. That’s the reason I took the project. I’m a fashion and commercial photographer, and I’m always on the lookout for interesting projects.”

Planning took about three months. He said: “There were questions about the color of coffins; they also wanted to incorporate the idea of death. The challenge was to make the pictures look good without being too morbid.”

Lim said making the couple look good was easy. Tay is 1.75m tall and looks like a model while Cheng is, in the words of the photographer, also tall and “quirkily handsome”.

Initial plans to shoot the pictures with a white horse at the Singapore Turf Club in Kranji were nixed when they could not get permission.

They decided to do the shoot – which took just one day – in Punggol instead. Friends and relatives who have seen the pictures agree that they were done tastefully.

The couple – who have another set of martial-arts-themed wedding pictures taken in Japan – said convincing their parents was not difficult.

Cheng’s mother, Madam Ong Lay Hong, 59, said: “I was taken aback at first, because it felt morbid. On second thought, it is related to his business and expresses his passion for his work, so I supported it.”

Tay said: “They have worked so hard and put all they have into this line; their hearts and souls, so why not?”

Two geomancers contacted told The Sunday Times that the pictures are acceptable because of the couple’s profession.

Yvonne Teh from Five Arts Geomancy Consultancy agreed and said: “Many Chinese businessmen consider coffins lucky because the Chinese word for ‘coffin’, guan cai, can also mean official and wealth. In fact, many people keep little coffins as good luck charms.”
Geomancer Adelina Pang, however, said that, while the pictures are fine as keepsakes, the couple should not display them at their wedding reception. “It is taboo for many people and will turn them off,” she said.