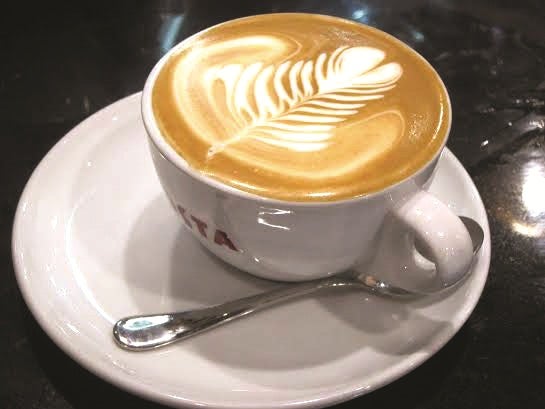 It may  have taken a while to open its first branch in the country, but Costa Coffee, the No. 2 coffee chain worldwide, is now brewing at Eastwood City Mall.

The two-story branch uses a lot of weathered wood and framed pictures for a cozy, lived-in look. Cool Britannia comes from the witty slogans on the walls and a couch upholstered with a design of the Union Jack.

Looking beyond the Instagram-worthy nooks, however, you will discover a coffee company that takes its business seriously.

Costa Coffee started in 1971 as a coffee roastery. Italian brothers Bruno and Sergio Costa couldn’t find premium coffee in London so they decided to roast their own beans and sell the product to local caterers. More than 40 years later, Costa Coffee has over 3,000 stores worldwide, including 1,800 in the UK.

Officials at the pre-opening said they had been previously approached several times by other groups, but they ultimately chose to partner with Robinsons Retail Holdings, Inc.

“We sell 20 million cups of Mocha Italia coffee every month,” said Judd Williams, Costa Coffee director for the Middle East and Asia. That particular blend is its most popular, and is made with a specific blend of Arabica and Robusta coffee. The resulting blend is described as smooth, round and rich.

To ensure the quality and consistency of the Mocha Italia blend, Costa Coffee once insured the tongue of its master taster Gennaro Pelliccia for 10 million British pounds.

For first-time customers, Williams suggests ordering a cup of Flat White which consists of a skillfully extracted shot of coffee (called a Cortissimo) “smothered” with a thin layer of milk bubbles poured by their baristas, all of whom underwent four to six weeks of training here and abroad.

Williams explained that unlike a regular shot of espresso that can be overly bitter, a Cortissimo stops short of including the last few drops so the shot is naturally sweet.

“We tell guests to first try the Flat White without any additional sugar or sweetener so they can taste our coffee,” he said.

The store’s opening team includes Erl Bryan Olid, the 2014 world champion barista who made our first Flat White. The proud Filipino, who is based in the Middle East, even has a specially marked container where he froths the milk he pours into each Flat White.

If you prefer your coffee cold, Williams suggests his favorite, an iced vanilla latté with low-fat milk, or a Frostino, a new blended ice drink that is popular in the Middle East and in Asia. Other items worth ordering include several sandwiches—the ham and cheese is a favorite—or the cake slices, including ones made with ube or ripe mangoes.

Four more Costa Coffee branches are scheduled to open before the end of the year at Robinsons Ermita, Tera Towers, Bonifacio Global City and Robinsons Antipolo.