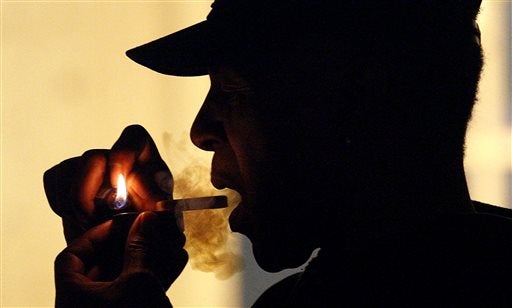 In this May 5, 2011, file photo an unidentified man smokes medical marijuana during karaoke night at the Cannabis Cafe, in Portland, Oregon. AP

Could Martha’s Vineyard, Nantucket miss out on medical pot?

BOSTON — Massachusetts has a cannabis conundrum.

State law requires every county to have a dispensary for medical marijuana, but federal regulations forbid the drug from being transported across U.S. waters. That leaves the tourist havens of Martha’s Vineyard and Nantucket potless unless someone gets a license to grow it legally on the islands.

Despite their small size, both islands are their own counties. State officials suggest the federal restrictions could add to the challenge of opening medical marijuana outlets on both, or either, of the islands in the near future and may preclude the possibility of the islands sharing a dispensary.

One approach to establishing dispensaries on the islands would be to license an operator to cultivate and sell pot at the same location, perfectly legal under the state law. Geoff Rose, a transplanted New Yorker who has lived on the Vineyard for 14 years, applied to the state health department for a license to do just that.

The federal waters obstacle, he said, is “an impediment to those who thought they could cultivate off-island and transport here, but I don’t see it as an impediment at all.”

His company, Patient Centric of Martha’s Vineyard, originally applied last year under a since-discarded licensing process but fell short of meeting the state’s criteria at the time. He hopes his renewed bid will get a more favorable reception, allowing him to open by next year in the town of West Tisbury.

Rose was unsure of the level of demand for medical marijuana on the Vineyard but noted the island is to home to many seniors and retirees who have cancer or other chronic conditions. Doctors have certified more than 14,000 people statewide to use medical marijuana, but the state doesn’t have a breakdown by county.

Advocates for the therapeutic use of cannabis are pushing for federal legislation that would clear up gray areas where state and federal laws intersect.

“No matter how many states do it, we are still going to have some of these weird loopholes that people fall into,” said Christopher Brown, spokesman for the Washington, D.C.-based Americans for Safe Access.

Massachusetts has struggled in general to implement a 2012 voter-approved law that allows patients with certain chronic or painful conditions to register with the state and use marijuana.

The law permits as many as 35 dispensaries, but the first opened only recently, in Salem. Republican Gov. Charlie Baker, who took office in January, ordered a more streamlined licensing process, which has won praise from medical marijuana supporters.

Some companies are proposing a central cultivation center that would then supply several dispensaries in different locations. That would not be possible for the islands.

Marylou Sudders, state secretary of Health and Human Services, predicted as many as 15 dispensaries could open statewide by year’s end, but she added: “Perhaps we have to do something differently on the islands.”

Jeffrey Roos, chief executive of Mass Medi-Spa Inc., said Thursday he was seeking local support for a plan to build a small dispensary and growing facility on Nantucket. He said his company originally wanted to cultivate at a larger site on the mainland and ship to the island, but abandoned that idea after the state raised concerns over the transport issue.

Ferries that shuttle visitors and islanders travel over coastal waters that fall under federal jurisdiction.

“Our policy remains the same; it’s illegal to transport and possess” marijuana, said Ross Ruddell, a spokesman for the U.S. Coast Guard in Boston.

That means someone who is registered under the state’s medical marijuana program could be subject to arrest for taking it from the mainland to a summer home on the islands.

Still, Ruddell said he was unaware of any enforcement by the Coast Guard around medicinal marijuana and pointed to current discussions aimed at reconciling U.S. and state policies.

Likewise, Brown said his organization hasn’t heard of any incidents nationwide involving federal waters, including travel between the islands of Hawaii.

Americans for Safe Access hailed the recent passage by the U.S. House of a measure that would reauthorize a ban on spending by the Department of Justice on enforcement measures against medical marijuana in states where it’s legal. But final passage of the appropriations bill in which the provision is contained is in doubt, and the group continues to push for a more comprehensive law prohibiting any federal interference in state-approved programs, Brown said.