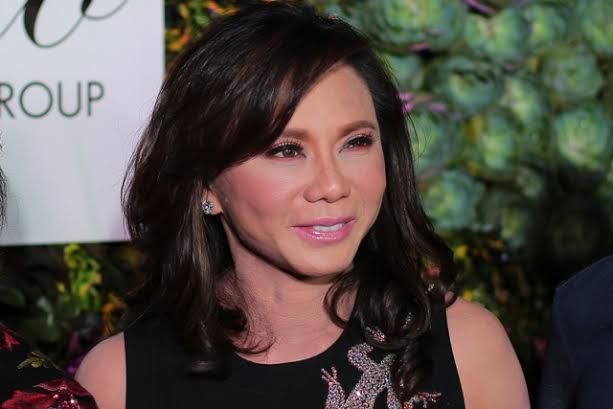 Like her female endorsers, Belo, who appears on both covers, wears a long silver dress by Cary Santiago. British photographer Nigel Barker shot both covers at Solaire Theater on two separate days during his visit to Manila to launch his book in June.

Barely five days had passed since San Diego and several others, including bag designer Tina Ocampo and husband Ricco, survived a helicopter crash in Batangas. The crash claimed the lives of billionaire businessman and philanthropist Archie King and pilot Felicisimo Taborlupa Jr.

“I’m not a ghost,” declared San Diego, to cheers of friends from Manila’s high society. “I’m going to read from my cue cards because it has been a very emotional time for me and a lot of people.”

Apart from attending King’s wake, it was San Diego’s first public appearance since the crash.

San Diego, his voice at times on the verge of breaking, managed to remain composed throughout his nine-minute speech, as he revealed bits and pieces of what went behind the scenes of Philippine Tatler’s most star-studded cover to date.

It was Barker’s third time to shoot the magazine’s glam issue. Patrick Rosas and his team did the celebrities’ hair and makeup except for Belo, who opted for Juan Sarte.

The men wore their own tuxedos, while the women, including Belo, had to return their clothes to Santiago after the shoot. None of her showbiz endorsers charged Belo for agreeing to do the shoot.

“Tatler is not really known to feature celebrities on its cover,” San Diego said.

When PR man Joji Dingcong brokered the idea to him in February, San Diego agreed as long he got to choose the celebrities. The only non-show biz personality who made it to the cover is furniture designer Jessica Kienle.

San Diego is a friend of some of them like Gutierrez and Gomez, and has known Pascual and Ramsay for years. All, he said, including Geronimo, have this unique quality to shift and “transcend” between show biz and high society.

San Diego also revealed that he once worked briefly for Belo back in 2000.

“I think I got fired for doing nothing,” he said good-naturedly. “It wasn’t meant to be. Vicki and I have known each other for years, and she’s a beautiful person inside out, generous to a fault.”

Belo countered that San Diego wasn’t fired but was pirated by her then boyfriend Dondi Almario. The late businessman was responsible for bringing Tatler to the Philippines.

“Anton was then working for me,” she said. “Dondi said that the best person he could think of to be Tatler’s editor in chief was Anton. He then asked my permission if he could steal him from me.”

Despite their friendship, Belo never made it to the magazine’s cover until now. She never dared ask because “I’m not young, beautiful, sosyal or a super successful businessman like MVP (Manny V. Pangilinan) or Ben Chan.”

San Diego said, “Everything happens in perfect time. People might think that it took Vicki 25 years to land on Tatler’s cover, but we’re only 14 years old. We’re much younger than Belo.”

After the accident, San Diego thought of not attending the event. But his sense of duty prevailed in the end.

“There were moments earlier when I felt nervous, even scared of the big crowd,” he said. “But right now, I feel blessed. I will probably rest after this. I don’t think I’ll be going to any social event for a while.”