Cara Delevingne: Would she shave her brows for a role? ‘Yeah, sure!’ | Inquirer Lifestyle 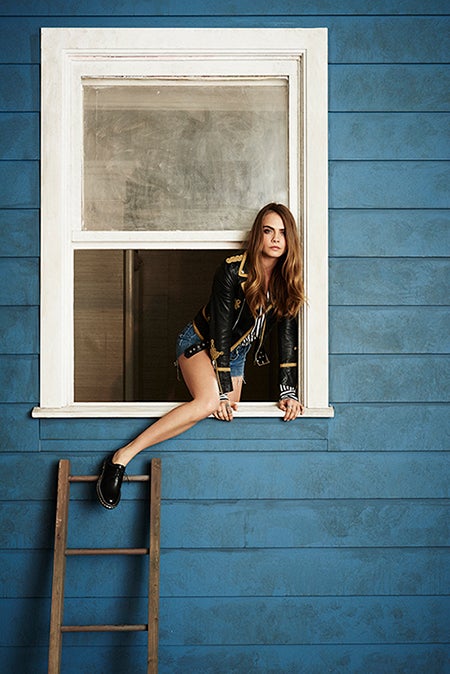 CARA Delevingne plays Margo Roth Spiegelman in 'Paper Towns.' "We had to honor Margo’s energy and find the girl who, when she comes to your window at midnight, you’d jump out of it for her,” said director Jake Schreier. PHOTO BY BRIAN BOWEN

Cara Delevingne: Would she shave her brows for a role? ‘Yeah, sure!’

“Are you ready for Cara?”

But before we could speak again, a familiar voice comes on. “Hello?”

There she was, Cara Delevingne, British supermodel, queen of eyebrows, Instagram master and now movie star, on the phone, calling from Australia.

“Hi,” she says, packing as much playfulness as you can into one syllable.

It was the day after the “Paper Towns” premiere in Sydney. In the film adaptation of the John Green novel, released a year after the incredibly successful “The Fault In Our Stars,” Cara, 22, sheds her British accent and plays Margo Roth Spiegelman, a mysterious high school queen bee who disappears after a late-night adventure with her childhood friend Quentin, played by Nat Wolff.

“It was an immensely tricky casting decision. We had to honor Margo’s energy and find the girl who, when she comes to your window at midnight, you’d jump out of it for her, and then when she disappears, you’d drive 1,200 miles to find her,” said director Jake Schreier.

But they found her in Cara, who says she cried when she found out she got the role.

“I saw her in the audition room as she walked in and I was like, ‘That’s Margo,’” Nat told MTV News.

Cara, who says the most surprising thing about filmmaking is doing press tours, has been slaying it as she promotes the film around the world—getting proposed to by a puppet before playing guitar and drums on a TV show in Spain, catching chocolate in her mouth in Germany, wielding a pencil and giving YouTuber Troye Sivan on-fleek eyebrows in Australia.

But this doesn’t come as a surprise to her fans. Even as a model, Cara was never the silent mannequin or the cookie-cutter clone. She’s fun, she’s spunky, she’s anything but boring, she has a personality that leaps out of the pages of fashion magazines.

And she’s multi-talented. too. She sings, she plays the drums and the guitar, she can beatbox, leading many people to ask, “What can’t this girl do?”

But for now, she wants the world to see that she can act, something she says she’s always been passionate about. And they will get plenty of chances to do that. So soon after her transition from catwalk to cinema, Cara is already a prolific actress.

After “Paper Towns,” she has four other films in post-production (“Pan,” “Kids in Love,” “London Fields” and “Tulip Fever”), one in pre-production (“Valerian and the City of a Thousand Planets”) and she’s currently filming the super villain film “Suicide Squad,” where she plays Enchantress.

And for John Green’s Filipino fans who had the chance to catch a special screening of “Paper Towns” at Greenbelt earlier this week, Cara has already proven herself, and they erupt into screams at the mention of her name.

(READ: The verdict on ‘Paper Towns’)

“I was blown away by Cara. I didn’t imagine that she would play Margo so well. I loved it,” said Illac Aragon.

What’s the most fun thing you’ve done in Australia so far?

The premiere was really fun, it was great meeting all the fans. But I haven’t done anything else. I’ve literally been here for a day. I haven’t really had much time, unfortunately.

Are you nervous about the world watching your movie soon?

Yeah. I really hope everyone enjoys it as much as we enjoyed filming it. And you know, John has such a huge fan base and I really hope I live up to the expectations of being Margo. 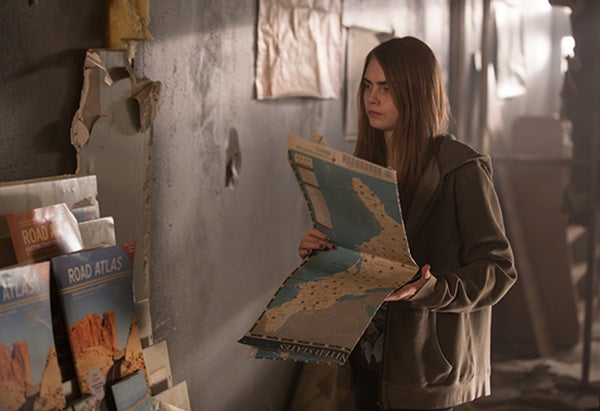 John Green said that you were the closest person to Margo that he’s met. How do you feel about that?

Do you feel that, like Margo, people also have the tendency to “misimagine” you?

In which other ways do you relate to Margo?

The pranking, I like to do that as well. The adventure-seeking, living through experience, that kind of stuff.

Which of Margo’s pranks was your favorite and why?

Saran-wrapping the car. I thought it was awesome. It was really cool. I just like how much she went into detail with each of the pranks and how creative she was with all the notes and stuff. I really respected her pranking capabilities. 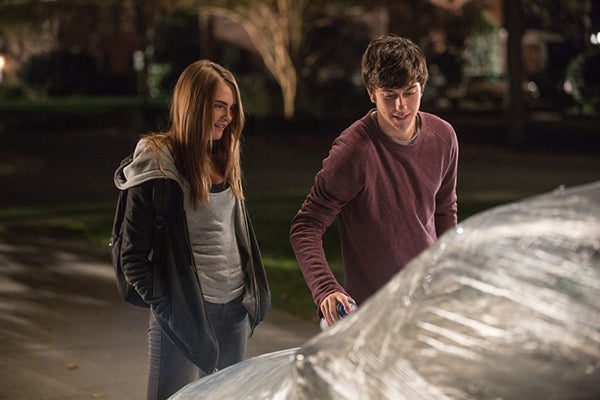 Do you see yourself in Q, as well, in any way?

Yeah! Completely. I feel like all the characters you can relate to in a lot of ways. Like Q, especially now, I plan a lot. I know what I’m doing till next year so I get that. He likes music. I do as well. He also likes video games… there’s a lot of things. Also, he’s a romantic and so am I.

What’s it like having Nat Wolff as your Q?

Nat is just such a dream to work with and as a general human being. He’s a lovely friend and a wonderful actor. I really can’t wait to see him do more. I really think he’s gonna be one of the greatest. It was really great. I don’t think I could have been Margo without him. 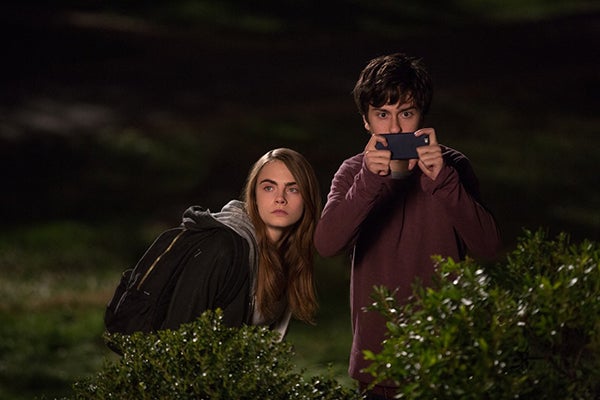 It’s amazing. I love John, he’s amazing… it was such a crazy experience to watch “The Fault In Our Stars” and hear about him as an author and to be working with him. He’s so funny and he’s so smart and, honestly, being on set with him is one of the funnest things of the lot.

What surprised you the most about filmmaking?

Are you exhausted by now?

Yeah, pretty exhausted. I’ve got a lot more to go so I can’t really be. 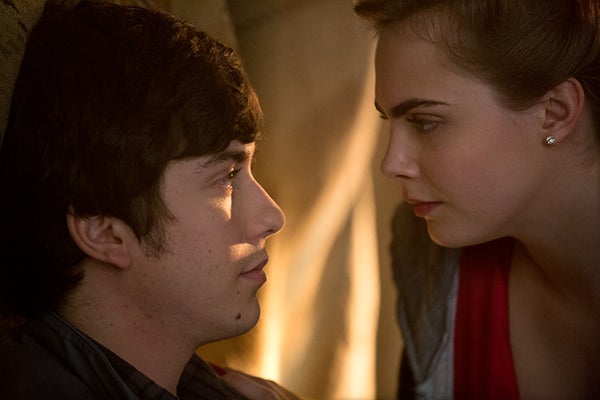 Did modeling prepare you in any way for filmmaking? Or do you think it’s a totally different world?

Will you ever shave your eyebrows for a role?

I don’t know what role would require me to shave my eyebrows but, yeah, sure!

If you really liked it, huh?

You’ve been writing music since you were a kid, you play the drums, you sing. Is music something you intend to pursue as well?

I’m not pursuing it, it’s just a part of my life. I don’t have the time to do anything else at the moment. One day, maybe. 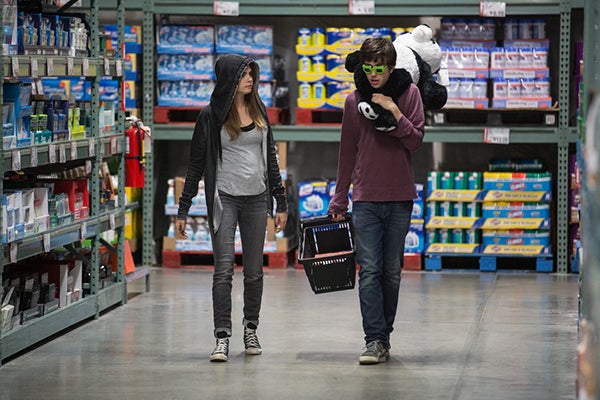 No. I try not to. If anything happens, people kinda tell me about it. I don’t want to seek that stuff myself.

We were excited to find out about your campaign with Penshoppe.

Everyone has been asking, does this mean we might get to see you here one day?

Oh my God, I hope so. I’ve always wanted to go to the Philippines. I would love to come, whether it’s with Penshoppe or not. I would really like to come over there.

We interviewed Kendall about her Penshoppe campaign and we talked about you and she said you were like a sister. Can you tell us a little about your friendship with her and about #CaKe?

She’s my baby, like, I love her so much. And also at the same time, I think I’m hers because she’s also far more mature than me most of the time. Yeah, I love that girl.

Your IMDB page is crazy, you have so many upcoming films. Which of them are you most excited about?

All of them. I haven’t seen most of them. Probably this one but it’s now coming out so I’m not sure, I don’t know. That’s a very hard question.

I’m not good at relaxing. I have a bath or I meditate, try to do yoga, run.

What has been your most surreal moment?

Do you have a dream role?

If they tell you, okay, tomorrow you have the day off, you can do whatever you want, what would you be doing?

Stay in bed and sleep or watch TV. And go to the spa. I should probably run around Australia, but to be honest, the weather’s terrible.

Where are you headed after Australia?

Back to filming “Suicide Squad.”

I find all of it crazy. They scream, they cry and they shake. I’m just a human being so that makes me feel weird. I just want to hang out and we can talk but everyone gets really nervous, I don’t know why.

“Paper Towns” opens in cinemas on July 22. Watch the trailer below.