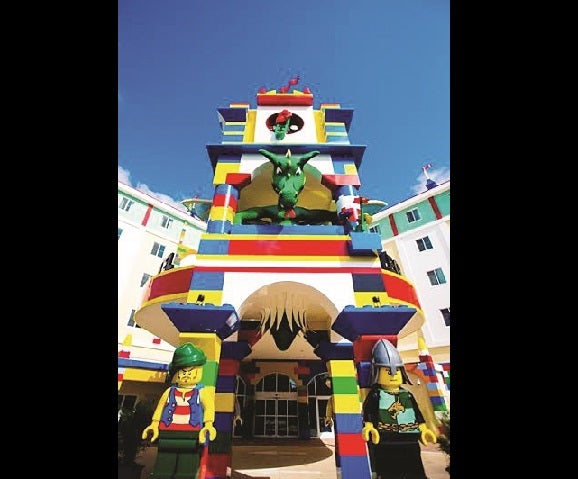 DRAGON by the entrance

Get drenched in an interactive water ride, have fun on a “dragon coaster” that zips through a castle with smoke-belching creatures, and take all the selfies you want with larger-than-life mascots.

If you think these are just the latest offerings from the usual theme parks in Orlando, Florida, guess again.

As expected, a huge chunk of these visitors went to Disney World, Universal Studios and SeaWorld. But there’s more to Orlando than the “big three.”

Less than an hour’s drive from downtown is the smaller city of Winter Haven, host to one of the biggest Legoland theme parks in the world—a 60-hectare attraction with close to 50 rides and dining, shopping and entertainment options, including the newly opened Legoland Hotel.

Legoland Florida is aimed at children between ages two and 12, according to the park’s spokesperson, Brittany Williams. “We’re able to create a great experience that suits this particular age group. It’s a great park to grow up with—from Duplo Valley for toddlers, to the Dragon Coaster for older children.”

Even without the rides, Legoland has 28,000 brick models—some as big as a two-story house—that are attractions in themselves.

Consisting of 58 million Lego blocks, these weatherproof models come in all shapes and sizes—from dragons to giraffes, buses to fire trucks, divers to policemen.

Some are built around natural elements such as trees and rocks, while others blend seamlessly into rides and public spaces like restaurants, souvenir shops and Legoland Hotel’s lobby and check-in counter.

Bound by special cement to ensure people’s safety, majority of these miniature and larger-than-life Lego pieces are left outdoors.

One of our favorites is a whimsical section called Miniland USA.

Much like our old Nayong Pilipino, though smaller, the section has iconic landmarks and buildings from such places as Florida, Washington DC, New York, and Las Vegas.

Legoland Florida, which opened in late 2011, grew from an older theme park called Cypress Gardens. Because of its strategic location and beautiful setting, Cypress Gardens lent Legoland a unique look and ambiance not found in other theme parks.

Offering a respite from this summer’s soaring temperatures is one of Legoland Florida’s most popular attractions, the World of Chima. Be ready to get wet!

Legoland has “milder” roller-coaster rides such as Dragon Coaster and Technic Test Track. The latter simulates a testing site for cars similar to the one found in certain Lego box sets.

The nerve center of building Lego sets is Imagination Zone. It focuses on exploring and creation, with some of the most visually exciting Lego models, including a huge replica of Albert Einstein’s head that serves as the building’s facade.

The Hero Factory is another immersive play area, while Build & Test allows guests to build a Lego car and test it against the competition on a digitally timed track.

“While we’re a park for kids, adults really enjoy learning about the models, especially in Miniland,” said Williams.

Legoland Florida’s botanical gardens can soothe the nerves of even the most harried parents.

Located “130 kid steps away from the resort,” Legoland Hotel is essential to Legoland Florida’s expansion, as it allows guests to savor the theme park experience.

“From the smoke-breathing dragon made of 445,000 Lego bricks to the Lego Castle, brick pit, Lego carpet and 5,000 mini figures behind the check-in counter, every detail in the hotel was designed with Lego in mind,” said Williams.

Before the summer is over, visitors can spend time and have their pictures taken with Lego Friends at the newly opened Heartlake City.

Inspired by a Lego sub-brand for older girls, Heartlake City goes beyond Legoland’s world of primary colors into a realm of pinks, purples, horses and, yes, a shopping mall!

For details log on to www.legoland.com. Delta, one of the official airline partners of IPW 2015, flies daily from Manila to Orlando.