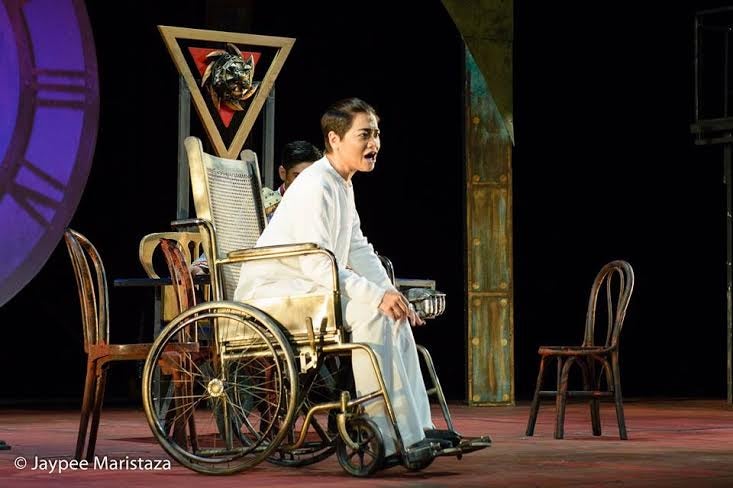 A nerdy androgynous hero, confined to a wheelchair, helps lead a secret brotherhood of hardened freedom fighters. A world is caught between epochs, in which the newfangled technology of steam engines, riveted steel, brass cogs and gears, horseless carriages and flying dirigibles fuel progress, even as Victorian-era sensibilities demand baroque filigree and Belle Époque opulence. An aristocratic society of pampered ladies in lace petticoats and dandies in monocles and bowler hats comes to blows with a proletarian punk revolution.
This is Tanghalang Pilipino’s “Mabining Mandirigma,” the gender-bending “steampunk” dance musical depicting the struggles of Philippine revolutionary Apolinario Mabini. It is on its last weekend at the Cultural Center of the Philippines’ Tanghalang Aurelio
Tolentino.

Brechtian, steampunk, androgyny—these words may initially seem incongruous to a story about the life and historical role of a revered national hero. But the strength of this musical is that it immediately makes apparent that such pairing makes perfect sense.

The Victorian Era that the steampunk genre reimagines as a retro-futuristic world is the very era in which the War of Philippine Independence and the subsequent Philippine-American War occur.

Also, in the postmodern age where movies and plays purposely jolt audiences by breaking the spell of suspended disbelief to remind them that the story is a representation of reality and not reality itself, a Brechtian treatment suits today’s audiences, most especially when its goal is to make history resonant and its lessons urgent.

Gender role reversals, meanwhile, are as ancient as theater itself. Both Greek thespians and Japanese Noh dramatists cast male actors in female parts. In contemporary theater, male roles such as Peter Pan have traditionally been cast with female actors, in part because of the lithesome and boyish qualities the role demands.

But the show’s revelatory punch is not confined to its radical casting. It revisits a knotty chapter in the nation’s history, when a nascent nation’s ruling class, even then, made short shrift of the larger nationalistic struggle of the masses for their self-serving ends.

The bourgeois ilustrados recommended by Mabini himself to compose the First Philippine Republic’s Congress, for instance, led by men such as Pedro Paterno and Gregorio Araneta, offered a P50-million loan package to Aguinaldo’s cash-strapped revolutionary government, but under onerous conditions that included allowing them to profit and control the assets of the government.

Tiongson’s notes as a playwright reads, “I decided to write this play on Mabini because the problems he encountered in 1898-1899 when he was a leading member of the Aguinaldo government are exactly the same as the problems our country faces today. These include feudal patronage which favors those who are blindly supportive of those in power, private armies consisting of army soldiers or private individuals whose loyalty is to the leader not as commander in chief but as a personal strongman, the use of violence against officers or officials who are believed to be a threat to the ruling power, men in government who will use their position in the legislature to pass laws that will consolidate their power and assure them of financial gain from government.”

On the other hand, Aguinaldo gets a bit more compassionate portrayal here, with the circumstances that led to some of his controversial decisions laid out with care and rigor.

All these may sound like a heavy slog, especially for a musical, but “Mabining Mandirigma” proves to be a tour de force with its poetic text, fantastic costumes, a stage design that works perfectly with the lighting and the video projection, and an ensemble of powerful and empathic voices.

Denisa Reyes’ choreography for the paralytic Mabini and Buencamino’s performance of her part are exceptional. Imagine her dancing with marionette-like movements while still able to express her disability and turmoil through her face and eyes.

Tiongson’s libretto could be verbose in stretches, leaving even seasoned actors stumbling over their lines and the audience a bit confused. Tellingly, the best musical numbers include one sung with only an acoustic guitar as accompaniment, as well as the lilting, humorous ditties by the designated villains.

Many of the songs have a lush, highly produced musical quality, but the cast sometimes has to strain to be heard amidst a wall of sound, competing with instead of complementing the music. That the music is not performed live, and the theater’s sound system also diminishes the recording’s clarity (a perennial problem with the venue), do not help.

Nonetheless, “Mabining Mandirigma” remains a joy to watch—an essential theater experience not only for its fundamental-to-the-Filipino content, but also for the spunk, effervescence and ingeniousness that it brings to telling its seminal story.