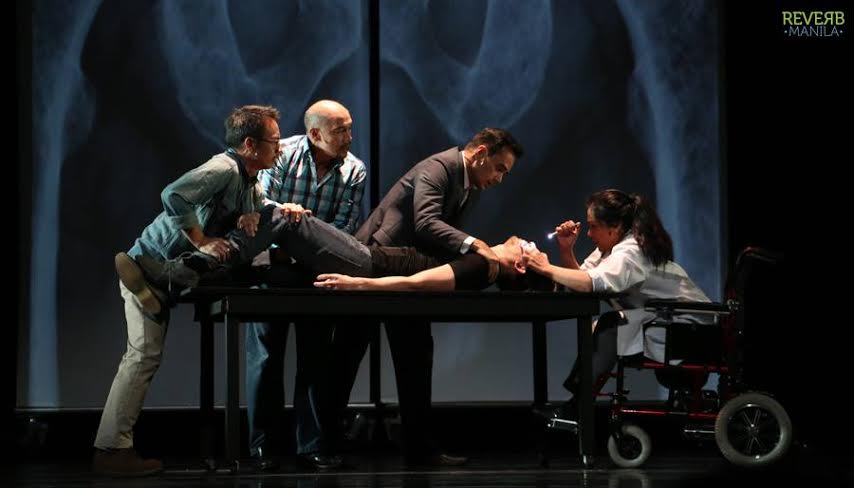 The heart-shredding ‘The Normal Heart’

Anyone with a heart, regardless of nationality, sexual preference or attention span, was bound to exit the theater bruised, or at the very least, mildly shaken. All those explosive confrontational scenes, the vicious truth-telling and incendiary diatribes, delivered with scalding conviction by a magnificent cast led by Bart Guingona, Topper Fabregas and Roselyn Perez, guaranteed just that.

Three decades since its inception, and thousands of miles away from its Manhattan setting, “The Normal Heart,” Kramer’s Pulitzer Prize winner about the early days of the AIDS crisis in New York, has lost none of its blistering power.

It did, in fact, only acquire an added layer of urgency with its timely Manila debut, what with the distressing rise of HIV-AIDS incidence in the country in recent years.

“The Normal Heart,” supposedly patterned after real-life events in Kramer’s life, is anchored on the character of Ned Weeks, who takes it upon himself to start the big, loud fight against HIV-AIDS at a time when the rest of the world, including his gay friends and the rest of their sex-loving community, would rather be silent, if not blind.

It’s a highly dramatic story, to put it bluntly, and in this production, there was really almost nothing to distract the audience’s attention from the storytellers. On a bare stage, harshly lit in shades of white, with only the most essential props—tables, blocks for chairs, lots of paper, a carton of milk whose violent end was also met with shock—Guingona and his cast sublimely took it upon themselves to be as transparent and vulnerable as possible, to sensational effect.

But the beauty of this production, which Guingona also directed, was in its refusal to be a mere provocative polemical drama—although as that, it was quite compelling. Rather, this “Normal Heart” was more a character study, a meticulous dissection of several fictional individuals, in our view, by the tightest ensemble to have graced the stage so far this year.

In their hands, there were neither good guys nor villains—only real people, with motivations and principles and conflicts. And so when they fought, we watched, felt for them, even shed a tear or two for them, but hardly took sides. It was a plagued community in danger of collapsing onto itself, and we could actually understand why.

Kramer’s language—at once vicious and playful, verbose and vivid, and most affecting when delivered in brutal spurts—requires a certain level of theatrical skill and verbal dexterity to pull off.

What’s more, each character gets at least one extended dazzling moment in the spotlight, an opportunity to vent his rage and scream at the cruel world. That these actors—Red Concepcion, Jef Flores, Nor Domingo and TJ Trinidad (in a superb, self-assured stage debut), playing gay men who couldn’t be more different from each other—made it seem as if the words were flowing out of their brains and mouths for the first time, was also this production’s triumph.

As Ned, Guingona showed both the relentless stridency and a hint of coldness intrinsic in the character. We actually understood that he would stop at nothing to fight for what he believes in, that he would wage the noble war even if that means breaking off with his brother (Richard Cunanan, excellent).

It was this blustering portrayal that made it quite clear why Ned would have the perfect partner-in-crime in Emma Brookner, the paraplegic doctor waging her own war against the disease, embodied with shattering authority by Perez.

And Guingona’s Ned also made the audience see why Felix, the closeted, sophisticated style journalist would be the perfect life partner for his character. To say that Fabregas, in a gut-wrenching, refreshingly against-type performance that only the most heartless could have survived unmoved, was splendid as Felix would be an understatement. He and Perez were the best things of this “Normal Heart.”

The most heartrending exchange in this production was actually almost an aside. Newly diagnosed with AIDS, Felix says, “I wish my mother were here,” to which Brookner asks, “Where is she?”

“She’s dead,” he says, and the way Fabregas uttered those lines, as if the fact were a wisp of autobiographical detail to be shrugged off, sealed the case for casual, unexpected silences as potent tearjerkers.

Poignant silence is rather hard to come by in this play, however. And it’s easy to call a show that ends with a treacly deathbed wedding, and that somehow designed every scene to end in a show-stopping monologue, manipulative.

But when it’s done this well—an almost divine alignment of acting, scene work, design and direction—who, indeed, are we to resist the melancholic onslaught of tears?