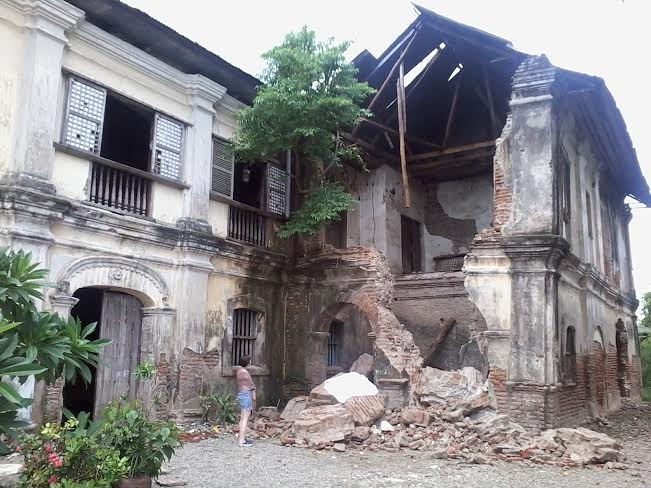 DPWH knocks down unique ancient roadside ‘Via Crucis’ in the Ilocos

ONE OF the 14 Stations of the Cross dotting the poblacion or town center of San Nicolas, Ilocos Norte, was recently demolished by a Department of Public Works and Highways (DPWH) contractor to give way to a road-widening project.

The initial agreement between the local government and the DPWH was to “earth ball” the brick structure and transfer it a few feet from where it used to stand, said Municipal Tourism Officer Richie Cavinta.

Cavinta later clarified that the municipal council had approved the demolition, in accordance with conservation guidelines that the contractor with the local government would reconstruct the structure using the same materials from the site.

Church art historian Regalado Trota José noted that the roadside Stations of the Cross are unique to the Ilocos.

He said the Stations of the Cross in Sarrat and San Nicolas in Ilocos Norte, and Magsingal in Ilocos Sur were the only such structures left in the entire Luzon.

The Stations of the Cross date back to the 19th century.

José explained that the Stations covered the entire poblacion of Sarrat and San Nicolas. He said this would be unique since the usual Via Crucis (Stations of the Cross) are found only in the four walls of the churchyard.

These structures are normally for penitential devotions during Holy Week.

“The Stations of the Cross or Via Crucis were 14 representations of the Passion of Christ from his sentencing by Pontius Pilate to the burial in the cave,” explained José.

“In churches, they could take the form of bas-reliefs or paintings hung along both sides of the nave. It was also common to feature them in various points around the churchyard, for outdoor devotions. These estaciones, as they were also called, took the form of small shrines of brick or stone; representations were ensconced in niches, which could also accommodate flowers and candles. In rare examples, the estaciones were distributed throughout the main streets of the town. Only three such Via Crucis are known: those in San Nicolas and Sarrat, both in Ilocos Norte, and in Magsingal, Ilocos Sur.”

Cavinta said the San Nicolas municipal government was now planning to develop the stations for pilgrimage tourism during the Lenten season, and to promote the religious wellbeing not only of its residents but also of visitors.

Meanwhile, the 5.0-magnitude earthquake that shook the Ilocos Region last July 5 caused the collapse of a portion of a 19th-century heritage house in San Nicolas town, Ilocos Norte.

Centered a few kilometers southeast of the nearby city of Batac, the quake damaged a section of the Valdes-Lardizabal house’s brick wall near the entrance.

The house, located across the street from the town’s plaza, is the largest and one of the oldest surviving old houses in San Nicolas, said Cavinta.

It is one of the landmarks of the town founded by the Augustinians in the late 16th century.

The local government, which now owns the property, was reportedly planning to convert the first floor into a cafeteria, museum and souvenir shop, and the upper level accommodations, after proper restoration and renovation.

Despite the damage, the house remains intact and the project to have it adaptively reused will push through, local officials said.

The “Ilocos Norte Guidebook” authored by José et al. has a description of the Valdes-Lardizabal house:

“The oldest and most imposing of all [San Nicolas houses] stands fittingly in front of the main plaza with an unparalleled view of the town from its volada windows on the wooden second floor supported by brackets. The residence is a bahay na bato which can hold its place in Laoag or in Vigan given its size and details, and even its refined interiors.”