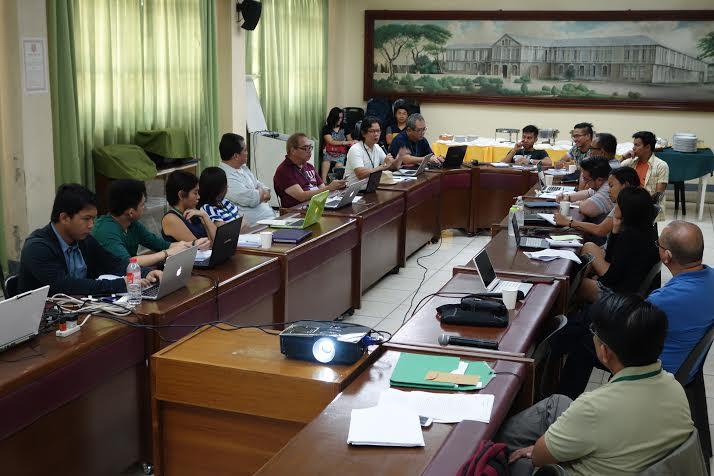 THE KRITIKA Workshop in session

CRITICISM, as in the arts, demands commitment. Passion alone cannot keep one persisting in a chosen craft or career.

It takes both passion and commitment along with humility to continuously grow and persevere in such practice, a challenge that Kritika, a workshop-seminar on art criticism, poses to scholars and young critics.

Held May 4-7, the 2015 Kritika National Workshop on Art and Cultural Criticism concluded its weeklong workshop at University of San Agustin (USA), Iloilo City.

Besides an engagement with theory, criticism is a critical practice for transformation, Tolentino noted. This was an overarching goal of the critical essays by 10 fellows.

In the essay “Pa(g)salubong: Analyzing the ‘Salubong’ and ‘Balikbayan’ Culture of Filipinos at NAIA; Terminal Syncopation: Attempt at the Rhythmanalysis of NAIA Passenger Terminal- I’ by Juan Miguel Leandro L. Quizon, the airport as a curious transient space where departures and homecoming coincide was examined.

Multi-art modes involve architecture were employed in analyzing symbolic spaces and structures in the essays “A Sense of Place: Atmospheric Disturbances in Peque Gallaga’s ‘Oro, Plata, Mata’ (1982),” by Tito R. Quiling Jr., and “Imagined Cities: A Textual Analysis of Cities in Select Short Stories by Lakambini A. Sitoy and Angelo R. Lacuesta,” by Mavreen Jackie Yapchiongco.

Different themes were identified in the archive of Philippine short stories in English during the Japanese Occupation in “Wartime Fiction and the Filipino Writer-Intellectual: A Thematic Analysis of Short Stories in English Published in the Philippine Review (1943-1944),” by Seneca N. Pellano.

Essays on pop culture included an investigation of political Internet memes in “Marcosian Memes and the Manipulation of Memory,” by Jose Santos P. Ardivilla, and of popular franchise reality TV show in “Understanding ‘Survivor Philippines’ and the Paradoxical Manifestation of Neocolonial Culture,” by Gregory Mark del Carmen.

Food took center stage in the study of the adaptation of Shakespeare’s “Titus Andronicus” in “Dinuguan as Violence in Dulaang UP’s ‘Tinarantadong Asintado,’” by Olivia Kristine Nieto; historic food fare in Cavite in “Dila at Bandila,” by Guillermo Ramos Jr.; and the evolution of Filipino cuisine and dining in “Tastes throughout Time: What Changes and Remains in Filipino Cuisine,” by Angela Velasco.

Discussions were not exclusive to cultural criticism. A forum was held with director Eric Divinagracia of the USA Little Theater after the group’s performance of “Imagine|a|nation,” which showcased vignettes of dramatic expressions in the aftermath of Supertyphoon “Yolanda.”

Another forum led by Alcazaren and Mata on issues concerning the preservation of cultural heritage was opened to students and faculty members from different universities in Iloilo.

The workshop provided fellows and panelists a glimpse of the rich history of Iloilo and they experienced Ilonggo hospitality as they took an architectural and cultural heritage tour from Calle Real and the districts of Jaro and Molo to the Unesco World Heritage Site of Miagao Church and San Joaquin Church.

The daylong tour would not have been complete without the sumptuous meals in La Paz Public Market and Tatoy’s Manokan and Seafood, and stopovers at Biscocho Haus, Panaderia de Molo and Mama’s Kitchen for pasalubong before ending in a low-key feast and closing program at the Camiña Balay na Bato in Arevalo.

Cultural criticism may seem overwhelming as a solitary endeavor, but with fellowship among passionate and committed scholars, just as in this year’s Kritika, it becomes an enriching and exciting feat.

Kritika 2015 was also supported by the DLSU Office of the Vice Chancellor for Research and Innovation, USA Special Projects Office,National Commission for Culture and the Arts, and DLSU Angelo King Institute for Economics and Business Studies.

Two food-writing fellowships were given this year.