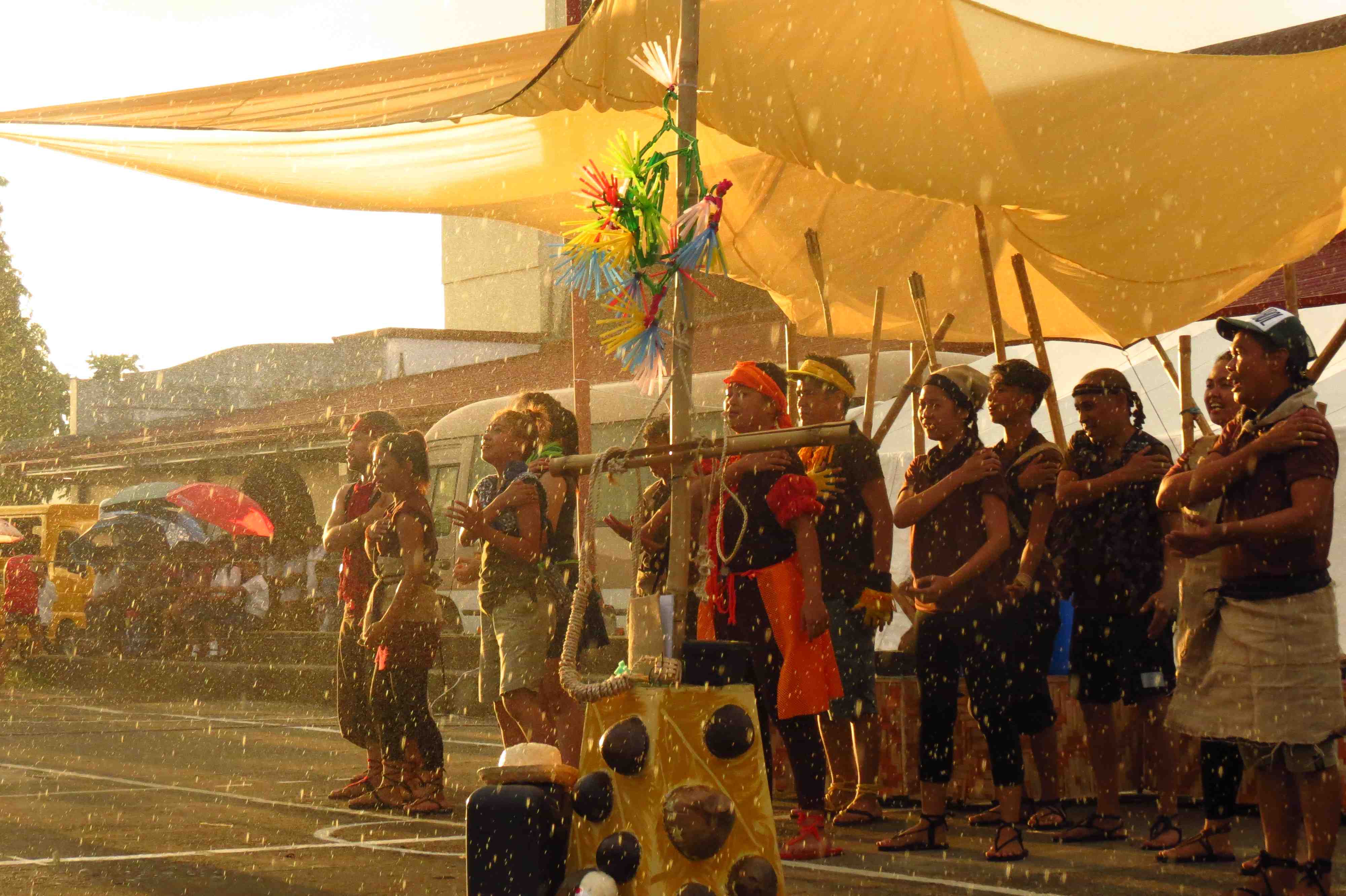 A "Padayon" show performed at a community plaza. Towards the end of the show, rain started to fall but the cast went on and finished the performance. CONTRIBUTED PHOTO/Peta

Lingap Sining: How recovery, resiliency are achieved through theater and art

PALO, Leyte—More than a year has passed since the plight brought by Typhoon Yolanda. Emergency responses and progressive development groups have worked hand in hand to aid in Leyte’s recovery.

From these groups, several have showed their support through gathering resources and goods to be distributed to those affected. Pioneering theater group, Philippine Educational Theater Association (Peta) offered a different kind of help.

Using theater and the arts, Peta has aided the community members of Palo, Leyte, rise above the disaster that was Yolanda. Establishing a creative campaign aptly titled, “Lingap Sining: Nurturing Hearts through the Arts,” it pushes for the right to safety and protection of children and the development of safe schools and resilient communities through theater for development.

“Ensuring safety in disasters is the most important thing. They [community members] need to be able to assess the disaster risk, their capacities, and vulnerabilities,” said Lingap Sining’s program director, Abigail Billones.

“Our perspective on disaster has to change,” she explains as most of the hard-hit individuals when recounting their experiences, expressed owing their lives only to faith.

Not dismissing faith, however, the communities also need to be more resilient in terms of acquiring and applying knowledge on hazards and risks. In the long run, we want the community members to participate in disaster risk reduction (DRR) planning and lead in the implementation of community DRR measures.

Through the support of the Terre Des Hommes (TDH) and the Canadian Catholic Organization for Development and Peace (CCODP), Peta has been able to sustain its contribution to the community recovery and empowerment of the survivors of Typhoon Yolanda with Peta’s “Lingap Sining Project: A Creative Campaign towards Developing Safe Schools and Resilient Communities.”

The project is both a community advocacy and capacity building program on Community Managed Disaster Risk Reduction. In cooperation with the local government units of Palo and Dulag, the Provincial Government of Leyte, and the Department of Education, roughly around 15,000 beneficiaries are expected to receive assistance and support from the Lingap Sining campaign.

Lingap Sining: How it all began

Since 2000, Peta has been actively engaged in setting the direction for the culture and arts program of Palo, Leyte. Peta has conducted youth and teachers art camps titled Kampyon, advocating the integration of arts in youth development and creativity in education in the municipality.

Peta, with the help of Palo Culture and Arts Organization (PCAO) has become part of the community and has provided support in many of PCAO’s advocacy-based performances on youth empowerment, environment, and heritage development.

Three weeks after Yolanda hit Leyte, Peta artist-teachers and members rushed to the aid of those affected by the typhoon. They conducted psychosocial support for the youth artists and leaders of PCAO, helping them process their traumatic experiences and facilitating expressive arts activities for children and young people in the evacuation centers, schools, and barangays. PCAO youth members saw their valuable contribution in providing a different kind of “relief” among the children and youth—one that inspires inner strength and “pagpapadayon,” which means “moving on, moving forward”.

The campaign is divided into eight phases from research visits to workshops and finally to the creation and implementation of a solid risk management plan for and by the community. The Lingap Sining project provides a comprehensive program to help build a safer and stronger community to the people of Leyte.

Peta started the project with a participatory community appraisal and consultation wherein Peta gathered leaders of the partner barangays and schools towards the stake-holders orientation workshops to level-off understanding and appreciation on Community Managed Disaster Risk Reduction.

One of the highlights in the two-year campaign is the creation of an entertaining and highly informative touring performance that aims to promote individual and community preparation for future hazards and calamities.

The comedy-drama titled “Padayon!” (moving forward in Waray) was launched at the “Estorya Festival: Honoring the Palo People’s Spirit of Resilience” held during the first year anniversary of Typhoon “Yolanda” in Palo, Leyte, on Nov. 8, 2014.

Written by Jmee Katanyag and directed by Melvin Lee (both Peta members) “Padayon!” tackles the story of two infamous families having a feud over who has the best “kakanin” in the island of Limpayo until a disaster struck their homes.

The disaster washed away their homes and left the island desolate but this is also the time when the families set aside their differences and unite to rebuild their flourishing community.

Mirroring the events that happened during Yolanda, “Padayon!” managed to provide a light hearted yet intense take on the tragedy, recovery, and resilience of the people of Leyte.

Currently, Peta is conducting the CMDRR Planning Writeshop in the Schools and the Barangays both geared towards integrating CMDRR in the school program, curriculum and the community development programs of the barangays from April until August 2015.

An important phase in this program is the implementation of local action initiatives focusing on strengthening the capacities of schools and communities on CMDRR education and advocacy. This will culminate in a barangay and municipal-level partners conferences.

Peta is working on transforming the minds and practices of the different sectors in the community so that safety, preparedness, and disaster risk reduction will be a way of life within the context of the communities, barangays, schools and the homes of every Filipino family.

Theater for recovery and education

Towards the 6th month of the Lingap Sining project, Peta’s involvement in the province has been strengthened as they continuously conduct workshops for the members of the community.

Billones explains one of the practices that urgently needs to be internalized by these communities is how to assess hazards. This is why it is important to engage the participation of children and parents in keeping their homes and schools safe long before the imminent hazard—thereby developing their knowledge and capacities on their rights to safety and protection.

This way, they can be more proactive in seeking security and proper shelter for their families.

“Another key element in ensuring safety and protection before, during, and after a disaster is the working together of the community,” says Billones.

Identifying the students, parents and local government units as the most crucial sectors in the barangay, Peta has customized the workshops to help these community members value the importance of disaster risk reduction.

Peta’s recent visit to Palo and the small barangays in Leyte has revealed that several months after the disaster, the wounds left by Yolanda have yet to heal.

Participants of the workshops who were asked to revisit their experiences still responded with teary eyes, although with a more positive outlook and hope for the future.

Thankfully, Peta’s integrated theater arts approach made it possible for people in the community to understand some of the most complex and sometimes intimidating terms associated with community disaster risk management.

By injecting visual arts, drama, movement, music and creative writing into exercises, Peta has created an avenue not only for risk reduction education but also psychosocial processing and support.

Through this approach, attendees of the workshop are able to make use of these creative processes to learn how to be more resourceful and responsive in the face of a hazardous situation.

Theater for advocacy and the new normal

In 2008, Peta produced “Noli at Fili Dekada Dos Mil,” a modern drama inspired by the events of Typhoon Winnie, which brought floods and mountain debris, killing hundreds in the whole town of Infanta, Quezon.

“Rak of Aegis” is showing at the Peta Theater Center until August 16.Vic Altiche, Peta/TVJ

Flooded with requests for a rerun, ‘Rak of Aegis’ aims for 200th show