Jose Llana takes over from Ken Watanabe in ‘The King and I’ on Broadway | Lifestyle.INQ ❮ ❯ 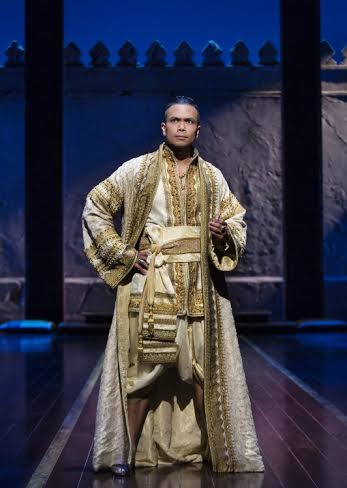 “It feels like a dream just like the last time. Twenty years later, I’m excited to revisit the material and play the part I always looked up to.” Llana stepped in last July 14 to replace Japanese actor Ken Watanabe as the King and will play the role until end of September. PHOTO BY PAUL KOLNIK

Almost 20 years ago, Jose Llana auditioned for “The King and I” and eventually got cast. The only problem was that he technically stole someone else’s slot.

He raised his hand when another auditionee didn’t show up, sang his piece, and then promptly confessed. “I was a college freshman, I didn’t know better,” he says, laughing.

They must have seen something in his talent, though, because that’s how he got his Broadway debut, playing Lun Tha in the 1996 Broadway revival with Donna Murphy as Anna Leonowens and Lou Diamond Phillips as King Mongkut.

Repertory Philippines staged the musical in 1977 with Baby Barredo and Bernardo Bernardo (Lea Salonga played one of the children), and with Joy Virata and Mel Magsipoc in 1990.

This year, Llana didn’t have to fake his identity to land the role of the titular royal in the current Tony award-winning revival of the beloved Rodgers and Hammerstein musical.

Llana stepped in last July 14 to replace Japanese actor Ken Watanabe as the King, and will play the role until end of September.

“Yes, I used my real name!” he says. “My audition was with the director, Bartlett Sher, and they were intense and a lot of fun. His vision for the show and the king is brilliant. I relished the opportunity to find ‘my King’ with him.”

“It feels like a dream just like the last time. Twenty years later, I’m excited to revisit the material and play the part I always looked up to.”

On his opening night, costar Kelli O’Hara, who plays Anna, tweeted, “Tonight, my new king @thejosellana killing it so far!!”

Murphy, meanwhile, had tweeted Llana, “Can’t wait! See you next month Your Majesty! Xoxo,” while Phillips sent his own tweet, “So very proud of you for carrying on the King’s torch, my brother! The heart of our 96/97 production beats on!”

Before stepping into “The King and I,” Llana was in “The 25th Annual Putnam County Spelling Bee” a one-night 10th-anniversary reunion concert featuring the original cast, where he originated the role of Chip Tolentino.

“The ‘Spelling Bee’ company is such a close family and we’ve stayed in close touch these past 10 years,” says Llana.

Jesse Tyler Ferguson (“Modern Family”) was also in the concert.

Born in Manila, Llana relocated to the US with his family when he was 3 years old. The call to perform was sparked by early and consistent exposure to the arts.

“I consider myself lucky to have seen many touring Broadway productions in Washington, D.C. where I grew up. ‘Les Miserables,’ ‘Cats’ and ‘Fiddler on the Roof’ are some of my favorites. And, of course, movie musicals like ‘West Side Story’ and ‘The Sound of Music.’

“I was also lucky to have a top-notch theater and music department in Thomas Jefferson High School for Science and Technology. My best friends today are still my friends from my high school choir and drama groups.”

He moved to New York to study classical voice at Manhattan School of Music in 1996. (Four years earlier, Salonga had just won a Tony award for her turn in “Miss Saigon.”)

Other Broadway credits include Angel in “Rent” and Wang Ta in “Flower Drum Song” with Lea Salonga. Llana recently played Ferdinand Marcos in “Here Lies Love,” the same role Mark Bautista played in the London run of the show.

Llana performs in “The King and I” July 14-Sept. 27 at Vivian Beaumont Theater, Lincoln Center for the Performing Arts. Visit thekingandibroadway.com or like on Facebook (KingAndIBway).