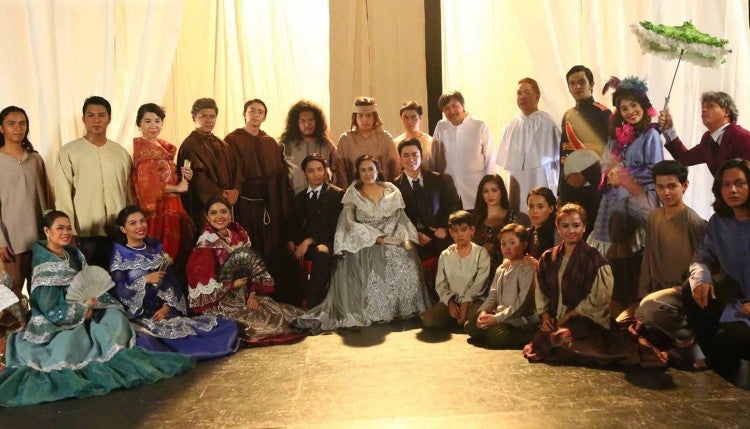 The cast of Gantimpala Theater Foundation’s “[email protected], The Musical.” “‘Kanser’ has had changes depending on the many directors and actors it has had,” said Gantimpala artistic director Joel Lamangan. “It just evolves through the years. ‘Kanser’ will keep on changing, evolving, but the material remains solid.” PHOTOS BY GANTIMPALA THEATER

The Gantimpala Theater Foundation production of Jose Rizal’s “Noli Me Tangere,” retitled “Kanser” and written by Jomar Fleras, has been around for some 35 years now. It was first produced in 1979, when the late Tony Espejo was Gantimpala artistic director, and is the foundation’s longest-running play.

The 1983-84 season of the play starred Tommy Abuel and was directed by Dindo Angeles, with Espejo as lights designer, Ed Murillo as production manager and Soliman Cruz as stage manager.

Since then, “Kanser” has been staged countless times. The most recent production was during the 2013-14 season, directed by Frannie Zamora and starring Joel Molina as Crisostomo Ibarra and Cris Pastor as Maria Clara.

And now the good news for musical theater buffs is that “Kanser” is being reincarnated as a full-length, sung-through musical, with music by Jed Balsamo, whose most recent project was Tanghalang Pilipino’s “Mabining Mandirigma.”

Excerpts from the musical were performed during the press launch, including a love duet between Ibarra and Maria Clara, and a rousing ensemble song by a mix of pop singers and the formally trained members of the choral group Viva Voce.

Balsamo, who is also the musical director, said he has written music based on Rizal’s novel, but not on this scale. Doing “[email protected],” he added, “gave me new ground to explore it not only as a full-length sung-through musical but also to discover aspects that I did not see in any of the past Rizal projects. It’s now a sung-through musical and this makes it more challenging. This has to appeal to a wide range of audience members, particularly the youth, so it has to have hummable melodies.”

Fleras said: “We added new scenes and new perspectives which serve to make the audience understand better the soul and message of Rizal’s ’Noli.’  There is also grandness in the design which the straight play did not have. The original script was written for chamber theater, so there is a sea of difference from that to this musical.”

During the open forum, Pangilinan was asked how it was singing for the theater.

“It’s a different way of singing (‘ibang pamamaraan’), unlike pop,” he said. “In theater, you have to study the lyrics well, so the audience will understand. There are details that should be emphasized.”

Lamangan observed that “‘Kanser’ has had changes depending on the many directors and actors it has had. It just evolves through the years.  ‘Kanser’ will keep on changing, evolving, but the material remains solid.”

“[email protected]” is actually the second production of the 38th season (2015-16) of Gantimpala. The first is Bonifacio Ilagan’s “Florante at Laura” (starts on July 31); Ed Maranan’s “Ibong Adarna” (starts on  Sept. 25); “El Filibusterismo” by Jomar Fleras (starts on Nov. 13); and “Si Totong Tipaklong” by Jose Jeffrey Camañag (starts on Dec. 4).