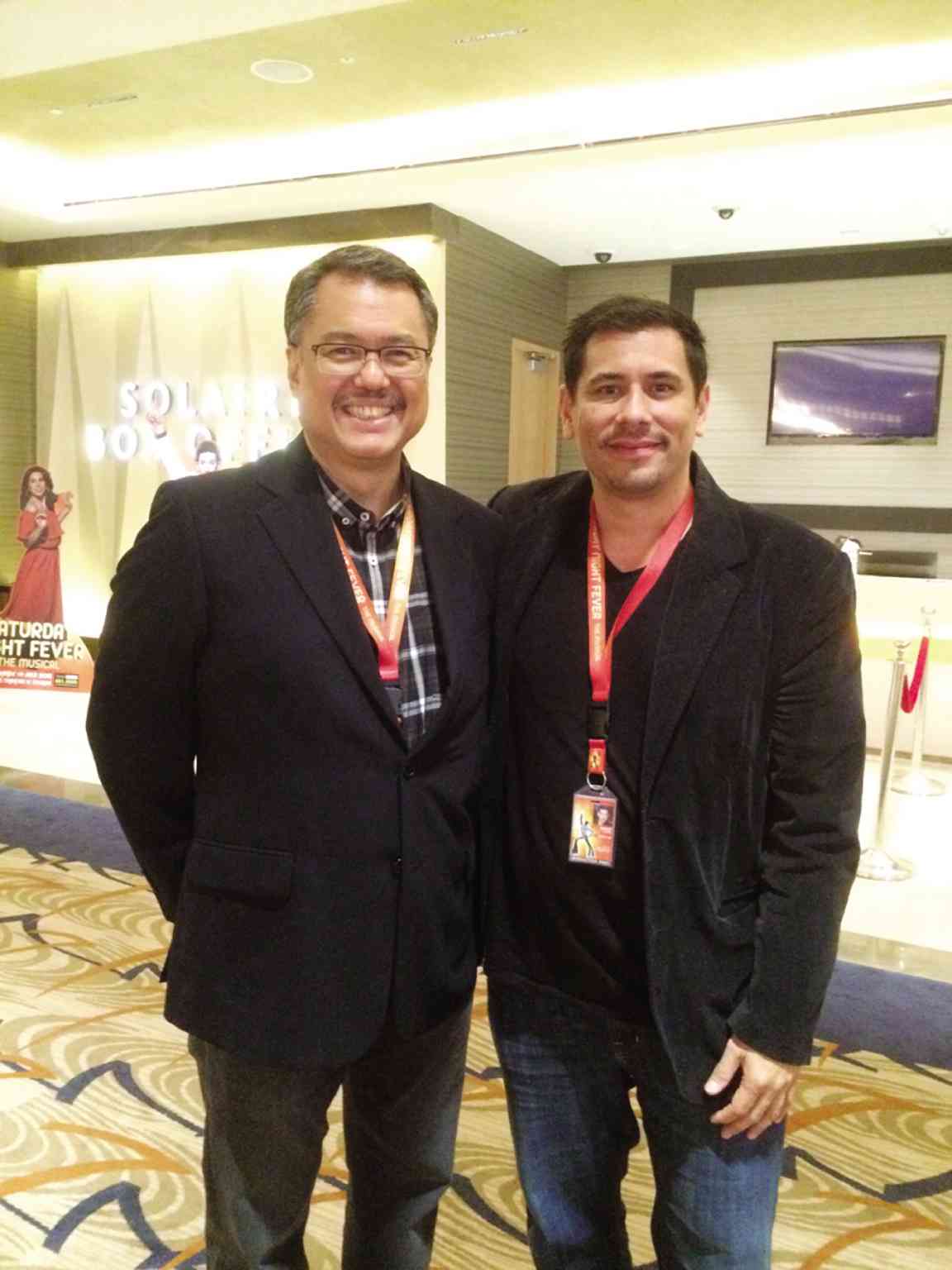 We caught the fever again, thanks to outstanding Filipino theater

WHO doesn’t hum the songs in “Saturday Night Fever” from memory?

The Bee Gees’ music gives flesh to one’s recollection of an era, back when one’s responsibilities were only to one’s homework, and didn’t have to post one’s meal on IG. Even today, “How Deep Is Your Love” is a go-to song when one feels nostalgic, as one watches the gridlock traffic of Edsa from up above, through the condo window.

We enjoyed it thoroughly—it was smooth and brisk, dramatic yet feel-good, the performance and direction spot-on. It was “Saturday Night Fever” all over again. More important, it made us feel carefree again, enough to make us gulp down a slice of cheesecake in the café after the show.

It brought us back to the movie of our disco years, the original “Saturday Night Fever” with John Travolta strutting on the street in butt-biting jeans. Mommy acquiesced to my tantrums and brought me to the movie house in Greenhills, only to suffer more of my tantrums after the movie.

We would find out later that night that such fits were brought on by acute headache and burning temperature—I was suffering from typhoid fever as I watched the movie.

After that weekend decades ago, how could one forget Travolta?

But Broadway’s Brandon Rubendall was good enough to make you set aside Travolta that Saturday at Solaire. A towering (taller than 6 feet) Tony Manero, he was buff (his abs so sharply delineated to the audience from several meters away), could move and dance superbly, and had the singing voice that not only brought back the memory of Barry, Robin and Maurice Gibb, but also infused meaning into those grooves.

Atlantis founder and director Bobby Garcia has yet to disappoint us. This theater veteran (who loves to recall that I first saw him as a tyke running around the newsroom) always knows how to choose the right material, achieve mastery of it, tweak it for the local audience, and mine the talent of his cast.

And he can edit his work apparently; he doesn’t make the audience stay a minute longer.

He is so attuned to this millennium—a dynamic force on the Philippine theater landscape, particularly in audience development. And apparently he also has the marketing savvy.

Garcia made some changes in the “Saturday” musical to suit the local audience—scaled down the set, rearranged the songs, among other directorial calls.

He and venture partner Bobby Barreiro were proud to tell us after the show that this production is touring not only the region, but also China and Korea, so impressed was Stigwood with Atlantis’ output.

Recently, we also watched Dalanghita Productions’ staging of Carlo Vergara’s “Kung Paano Ako Naging Leading Lady” at Peta (it’s running this weekend at Onstage Greenbelt). Although a bit long, it was riveting nonetheless, so “now”—the millennial’s milieu and mind-set of superheroes. It was such an in-your-face reminder of just how overwhelmingly talented our performers are, starting with Bituin Escalante—all of them within touching distance from the audience.

But too bad we missed well-applauded productions of Tanghalang Pilipino’s “Mabining Mandirigma” and Resorts World Manila’s “Bituing Walang Ningning.” (“Mabining,” we were told, will be restaged later this year.)

Inquirer Lifestyle has never been more proud than today to be running our Theater section every Saturday, with Gibbs Cadiz at the helm. It’s an exhilarating time to be covering the local theater scene and drawing the audience to it. (This is the last weekend of “Saturday Night Fever” and “Kung Paano Ako Naging Leading Lady.”)

We had an eye-opening conversation with global stylesetter Caroline Issa at the dinner hosted by Harlan+Holden with Eman Pineda. This Eurasian Wharton graduate, based in London, has turned her arts/style magazine Tank into a multiplatform brand, drawn a sizeable following to her blog, and has been serving as brand consultant.

She also has a ready-to-wear line for Nordstrom and products under L.K. Bennett, considered the world’s largest fashion store.

“Print media,” she said, “will further thrive because of digital.” She’s speaking from her experience.  The digital platform amplifies printed content. One will not destroy the other.

She affirmed what we’ve believed all this time—that content remains king. The game-changer is how media outfits break it down and recast it to suit each media platform and consumer demographic.

And this lean and tall stylista, who was in a Harlan+Holden long-sleeve shirt and trousers, so basic yet stylish, ate her El Cirkulo cochinillo and dessert fearlessly, no qualms. My type of woman.

Overheard at another dinner: A guest said matter-of-factly, “Actually it all boils down to whom you want to be first lady—Korina Sanchez, Heart Evangelista, or Dr. Elenita.”