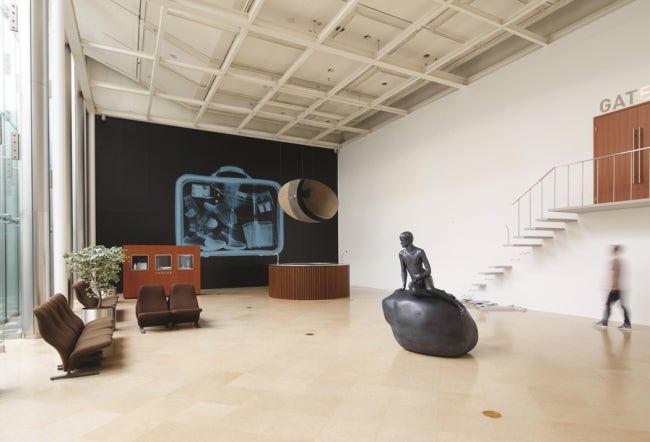 When you accidentally find a boarding pass from your last trip, it instantly reminds you of the time and place you had been, bringing an urge to leave everyday work behind and travel to an exotic place.

This may be what visitors to the Plateau Samsung Museum of Art feel when they walk into new exhibition “Aeroport Mille Plateaux.”

The exhibition hall has been transformed into an airport by artist duo Michael Elmgreen and Ingar Dragset. The admission ticket looks just like a boarding pass.

Visitors are greeted by a check-in counter as they open the door to the museum. Then they spot an information screen showing flights and times to different destinations. The destinations include some predictable places such as Calais, Phoenix, Dresden and Hong Kong, or somewhere exotic such as St. Tropez, Kuala Lumpur and places that don’t exist anymore: Cartago and El Dorado.

Once they check the time and the gate number, they are led to the security checkpoint.

The artists believe people’s behavior going through each waypoint at an airport is pretty much the same as how museumgoers behave.

“At home, we are allowed to be depressed, messy and hungry or hungry for love. But when we are in an airport or in a museum, we have to behave ourselves. We can’t eat our lunch in a museum,” said Michael Elmgreen, Danish artist, at a news conference last Monday.

One’s behavior is restricted by certain codes of conduct at an airport. Passengers are closely examined according to the rules: They are not allowed to carry inflammable, sharp objects in their carry-on luggage and are asked to take off their jackets at the security check.

The baggage restriction also became a part of the exhibition. The artists filled one side of the wall in the exhibition space with a painting depicting X-ray images of contents of a briefcase.

The artists have exhibited humorous architectural installations in public spaces before.

They drew attention early by setting up a fake Prada store in the desert of Marfa, Texas, in 2005. They more recently became known in the international art circle with the public installation in 2012 of a boy riding a rocking horse, “Powerless Structures Fig. 101,” at Trafalgar Square in London.

In 2009, the artist duo drew attention during the Venice Biennale by converting the pavilions of Norway and Denmark into a private residence inhabited by an art collector and his possessions, with the collector portrayed as a dead man floating face down in a swimming pool.

“We like to do art that doesn’t look like art outside. We believe art functions in the situations in which people wonder why things are there,” said Elmgreen, at the press preview of the exhibition Monday.

Humorous settings are also planted in the airport as well. A baby put in a bag is placed on the floor in front of an ATM. An ice box is placed outside the window for no reason.

Inside the gate, visitors pass by a rotating billboard that reads, “This Space Can’t be Yours,” and enter a hallway that diverges into departure and arrival terminals.

Each gate is designed for the audience to be reminded of their past experiences at the airport. The clock on the wall has stopped ticking as if to symbolize much waiting and the patience passengers must possess at a departure gate.

In the arrival terminal, a strange black bag is left in a baggage claim area, circling around the belt.

The exhibition runs until Oct. 18 at the Plateau Samsung Museum of Art, on Sejong-daero street near Gwanghwamun Station in Seoul. For more information visit www.plateau.or.kr.