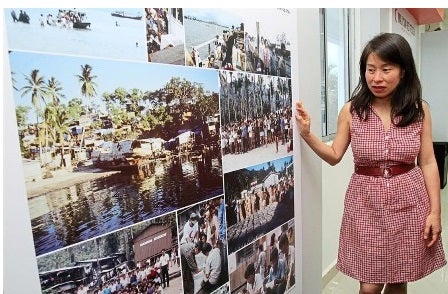 Photo from THE STAR/ASIA NEWS NETWORK

From refugee to award-winning author

Kim Thúy fled Vietnam 35 years ago with little more than the clothes on her back. Her award-winning book “Ru” is available in 26 languages

Kim Thúy landed on Malaysian shores with her family more than 35 years ago with little more than the clothes on her back. Today, Kim, 46, is an award-winning author based in Canada, her adopted home since hurriedly leaving Saigon all those years ago.

The Vietnam War had left her family in a desperate situation, and in a bid to save their lives and start anew, they boarded a cramped boat meant for river fishing and braved the high seas for four days before landing on a beach in Cherating, Pahang, in November 1979.

The trip seemed to have no destination, and tucked in the bowels of the vessel with no sight of day or night, she and the rest of the people with her had to simply cast fate into the hands of the boat’s pilot.

“We didn’t know the captain or the other people who were with us. I just remember reciting a Buddhist prayer my grandmother taught me, every time I was afraid,” she said when she was in Kuala Lumpur recently with a Canadian film crew documenting her life story.

Longing for the sight of land, Kim and her family arrived on a part of the beach close to where Club Med stands today.

They were part of a continuous mass exodus of asylum seekers who felt there was too little left for them in south Vietnam, the losing side of the war.

“I remember seeing a beautiful beach, and at that point, nothing could beat the sight of land,” she said. While land might have spelled safety, the sight of the Malaysian Red Crescent was what brought most comfort.

Life as a refugee

Kim’s past has been inextricably associated with the society since then.

In fact, she was in Malaysia to also look up her registration at the Malaysian Red Crescent Society (MRCS) headquarters, who, along with a variety of government agencies then, were responsible for documenting the immigrants who arrived here.

She, her parents and two brothers, along with other “boat people”, were housed in a refugee camp for four months in Penggorak, near Kuantan port, before receiving news that Canada was willing to take them in as war refugees.

And while moving to the great white north seemed daunting at that point, it was way better than the prospect of returning home.

“Life was hard by the end of the war, especially with the change of government. Everything became complicated. There was little access to education, and since my parents had prioritised that, we had to find a boat and leave,” said the double Universite de Montreal graduate, who earned degrees in translation and linguistics (1990), and law (1993).

Thousands of south Vietnamese fled the country in boats, ending up on the east coast shores of Peninsular Malaysia.

In some cases, given the lack of experience of some of the boats’ pilots, the flames on the tip of off-shore oil rigs functioned as beacons, almost lighthouse-like in nature.

A large number of these boats, overloaded with desperate people, capsized or broke up and sank in the rough South China Sea.

Many of those fleeing became victims of pirates operating in those waters, cruel degenerates who did as they pleased, often to deadly consequences. Kim and her family were among the lucky ones.

While in Penggorak, Kim and her family came face to face with the generosity of volunteers from the Malaysian Red Crescent movement.

“We didn’t get to appreciate the work of the volunteers much because we were only there for a short time. But today, coming here, I get to see the invisible hands at work,” she said, referring to the staff at MRCS.

Kim credits MRCS for giving them an identity. “With the cards written out, we were given a second chance at life … Malaysia gave us that chance,” she said, clearly choked up with emotion.

She takes her hat off to the volunteers who helped make their living conditions bearable at the camp, intimating that while life was tough for the refugees, the MRCS volunteers had it far worse.

“We just had to live life, but they had to face our miserable situation every day.”

Eventually, news arrived saying Canada had agreed to accept them and after four months in Penggorak, Kim and her family flew there. The sight of snow was one consigned only to TV, but now, the frigid cold beckoned.

“I imagined it to be winter 12 months a year there … and that’s not far wrong,” said the former lawyer, translator and restaurateur with a laugh.

The weather created a scenario of fish out of water for Kim and her family, and though she feared no vegetables grew there (ironically, she worked as a vegetable picker for a time), everyone settled in comfortably, especially with the welcome extended by the hospitable Canadians.

And at that point, anywhere was better than home, and a small town like Granby in Quebec, proved perfect.

“We led a fairytale life from the time we arrived in Canada. There was a zoo in the town, and it was like the greatest attraction there. So, many families volunteered to take us there. There were times when we went to the zoo twice a day,” she revealed, tickled pink and quipping that some of the animals began to recognise them.

Kim and her siblings all received their education while her father secured a decent job, given his fluency in French (French is predominantly spoken in Quebec), keeping the family comfortable and content.

Life as an author

Today, the mother of two makes appearances wherever the success of her first novel “Ru” takes her, a far cry from when she worked as a seamstress and cashier during her studies.

Almost unbelievably, the book (which was first published in French in 2009) was put together from ideas she jotted down every time she stopped at traffic lights.

“To keep myself from falling asleep, I started writing things down … and then put it all together. A friend of mine read it, liked it and sent it to some publishers.”

“’Ru’ means lullaby in Vietnamese and a small stream coming down from the mountain in French. So, the title gives a silent and small image … the lives of boat people are like that … trickling down,” said the Montreal-based novelist.

Although she’s spent most of her life in Canada, she is very much Asian at heart.

“Once I became a mother, I became Vietnamese again, and ended up doing all the things my mother did which I didn’t like,” she shared while in stitches.

The one thing she’s carried with her all through her life is the importance of family. “Family tightness is important to me.”

The most crucial thing for her to share with people during her book promo events, is to impress upon them that everyone can succeed, regardless of circumstances.

“I want them to see that we can come from nowhere … the darkest pit even, but we can always make it, through our will and the help of many.”