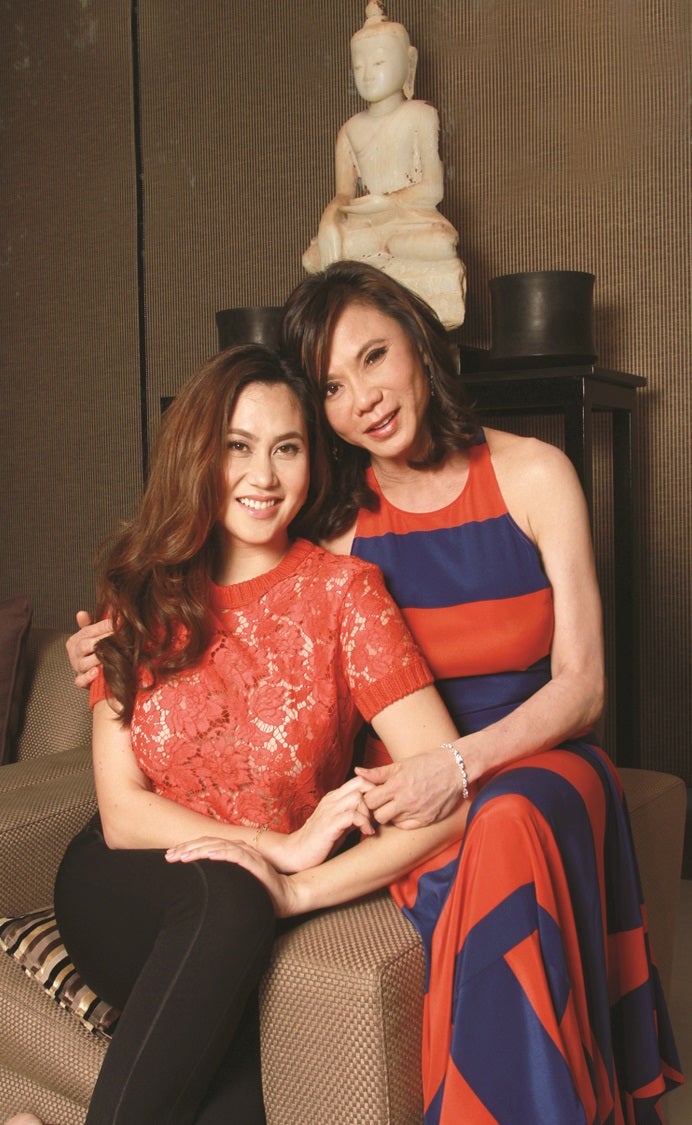 Vicki Belo with daughter Cristalle: “We don’t want you to get hurt.” PHOTO: NELSON MATAWARAN

“Being her mother must be hard for you,” a psychic told Cristalle Belo Henares when she was 13.

“Her” referred to her mom, celebrity doctor Victoria “Vicki” Belo who, the psychic said, was Cristalle’s child in a past life. This explained their present relationship. Cristalle cried upon hearing the psychic’s explanation.

For quite some time, Vicki, founder and medical director of the Belo Medical Group (BMG), has relied a great deal on Cristalle, who is now the executive director.

For the first clinic she opened in 1990 at the Medical Tower in Makati City, Vicki’s parents wanted a 100-sqm space. Instinctively, she picked a 40-sqm unit.

She explains: “I don’t like biting off more than I can chew. I opted to let it grow organically.”

Starting out as a dermatologist, Vicki broke ground in the country by venturing into liposuction, and glamorized the clinic’s services via celebrity endorsements and special events.

Cristalle points out: “One is service-oriented, with 300 front liners. Belo Essentials has a workforce of 45 and is sold in 6,000 supermarkets. The two companies have different business models, key success factors and key performance factors. You can’t put them together.”

Vicki recalls being overwhelmed by the challenges of managing a booming business. She was trained to diagnose skin diseases and zap fat, not to balance accounting books.

“I was running the business like a small clinic,” she recounts, “although I already had several clinics. It was getting out of control and employees were stealing.”

At the time, Cristalle was pursuing a degree in business management at Ateneo. Although she initially planned to work in other companies, Vicki urged her to join BMG immediately.

In 2005, Cristalle, then 22, started working in the company as her mother’s right hand and brand ambassador.

‘We complement each other’

Vicki notes, “We complement each other. My limitations are her strengths.”

Meanwhile, their house was being built in Makati. Characteristically, Vicki had no inclination to do site inspections, so the young Cristalle oversaw the construction with architect Ramon Antonio.

As the family settled in, Vicki remembers, a casual conversation at home led to the retail venture. Why not start a skin care line business for her daughter?

Belo Essentials was launched in 2007. The powerful branding and quality control drove sales beyond expectations: 48 percent growth in a year.

“It became bigger than I could manage, to the point that the cash flow wasn’t being handled well,” admits Cristalle.

Following friends’ advice, she tactfully justified to her mother the need to hire management professionals. “Many businesses handed to, or inherited by, non-qualified or non-deserving family members often came to a standstill. Professionals should be hired to run the company. I’m not an 8-to-5 person. We needed someone to man the fort,” says Cristalle.

For special projects, Cristalle is Vicki’s go-to person, the one who can bring people together and meet deadlines against all odds. When Vicki learned that a mall had offered them free use of its activity center, she asked her daughter to organize an event in one week, which, of course, Cristalle pulled off.

Cristalle served as project head of the construction of the Belo building in Greenhills, which houses offices of the Belo Group’s support services, a clinic and her own office. She collaborated with design tandem Ivy and Cynthia Almario and approved the technical plans and materials, complemented by blush mother-of-pearl and bespoke furniture by Dom Ferrer and Delfinos and a focal point of a painting by Isabel Diaz.

“She’s fun and very comfortable being Vicki’s daughter,” Cynthia says in a phone interview. “She has a vision for the clinic, infusing young blood into Vicki’s own ideas.”

Vicki is not one to be bothered with the nitty-gritty (“I get a headache just thinking about details”).

During the infancy of Belo Essentials, Vicki relates, her daughter was intensely hands-on. After 18 months, however, Cristalle lost steam. “My mom asked why I couldn’t be the 8- to-5 kind of girl.”

Can her daughter be her “hatchet” person?

“She’s a very nice girl,” Vicki says, “not one mean bone there.”

Their closeness sometimes blurs boundaries between their roles. Asked if Cristalle tended to be the authority figure to Vicki’s child in matters of the heart, the daughter replies, giggling, “She does what she wants.”

Mom retorts, “As if naman you don’t—hello?”

It’s the perfect moment for Vicki’s oft-repeated philosophy:  “I do what I want as long as I’m not hurting anyone, or I feel there’s nothing wrong with what I’m doing.”

Cristalle had a boyfriend that Vicki disapproved of. It didn’t last, Cristalle says softly.

“It wasn’t because of me; I had zero input,” Vicki says, chuckling. “Wasn’t I right, though? He was such a nightmare.”

Vicki recounts how her children initially disapproved of her romance with Hayden Kho. He wasn’t just arm candy, it turned out; the relationship has lasted for nearly a decade.

“I’ve not had a lot of relationships but they were all long- term,” says Vicki. And then, looking fondly at her daughter, she adds, “Boy, she’s grabe. I was shocked at how this sweet person could be such a lioness protecting her cub.”

Cristalle replies, slowly, “That’s because we love you. We don’t want you to get hurt.”

Cristalle was six and her brother Quark, eight, when, seeing how the breakup between Vicki and their father Atom Henares had devastated their mother, it became instinctive for them to be overprotective of her.

Today the family remains close-knit; Vicki and Atom are occasionally seen together in socials.

Throughout this interview, Vicki does most of the talking; Cristalle is either just quiet or multi-tasking on her mobile.

Vicki attributes her loquaciousness to a childhood fear. She was an adopted child, and someone seared into her mind that her parents would give her back if they weren’t happy with her. So she worked hard at being entertaining and accompanied her parents everywhere.

“Giving back,” Vicki adds. She recalls this Biblical verse from Proverbs that her father often recited to her when they felt the pangs of poverty in the slums: “There but for the grace of God, go I.”

“People looking down on others turn me off. How dare you have a superiority complex,” Vicki says.

BMG supports orphanages and several anti-poverty causes, such as Habitat for Humanity. For BMG’s 25th anniversary, the company donated funds for the Fallen 44, the elite policemen who died in the Mamasapano massacre early this year.

Since her teens, Cristalle has been involved in groups that promote spiritual formation.  Vicki recounts: “Atom always says, only half-jokingly, ‘What have you done to our kids?’”

Cristalle never fears roughing it up. In 2004 she went as a volunteer pre-school worker in Bukidnon, subsisting on a monthly allowance of  P3,500 for 10 months. For GMA 7’s “Wish Ko Lang” reality TV show, she went to a remote island in Coron, Palawan, to take care of two indigent children, who lived in appalling conditions.

Cristalle is also on the board of MovEd, a foundation whose thrust is to make education accessible to the poor.

For all of Cristalle’s enterprise and philanthropic bent, she seems to be the perfect heir to her mother’s business.

“Are you, baby?” Vicki coos again. “I was hoping she would be.” But Cristalle is in a relationship with a foreign hotelier currently based in Cambodia.

Vicki says, “Quark is an artist.  He’s not interested in Atom’s businesses. I thought Cristalle would be more involved in our businesses, but she told me, ‘I can run the business, Mommy, through Skype.’ It sounded like a warning, like she probably won’t be here.

“Since we are really close, that would surely make me cry. I miss her a lot when I go abroad. But their relationship is—oh no, this is so painful for me. She is happy. I’m just so afraid of the time when she leaves me.”