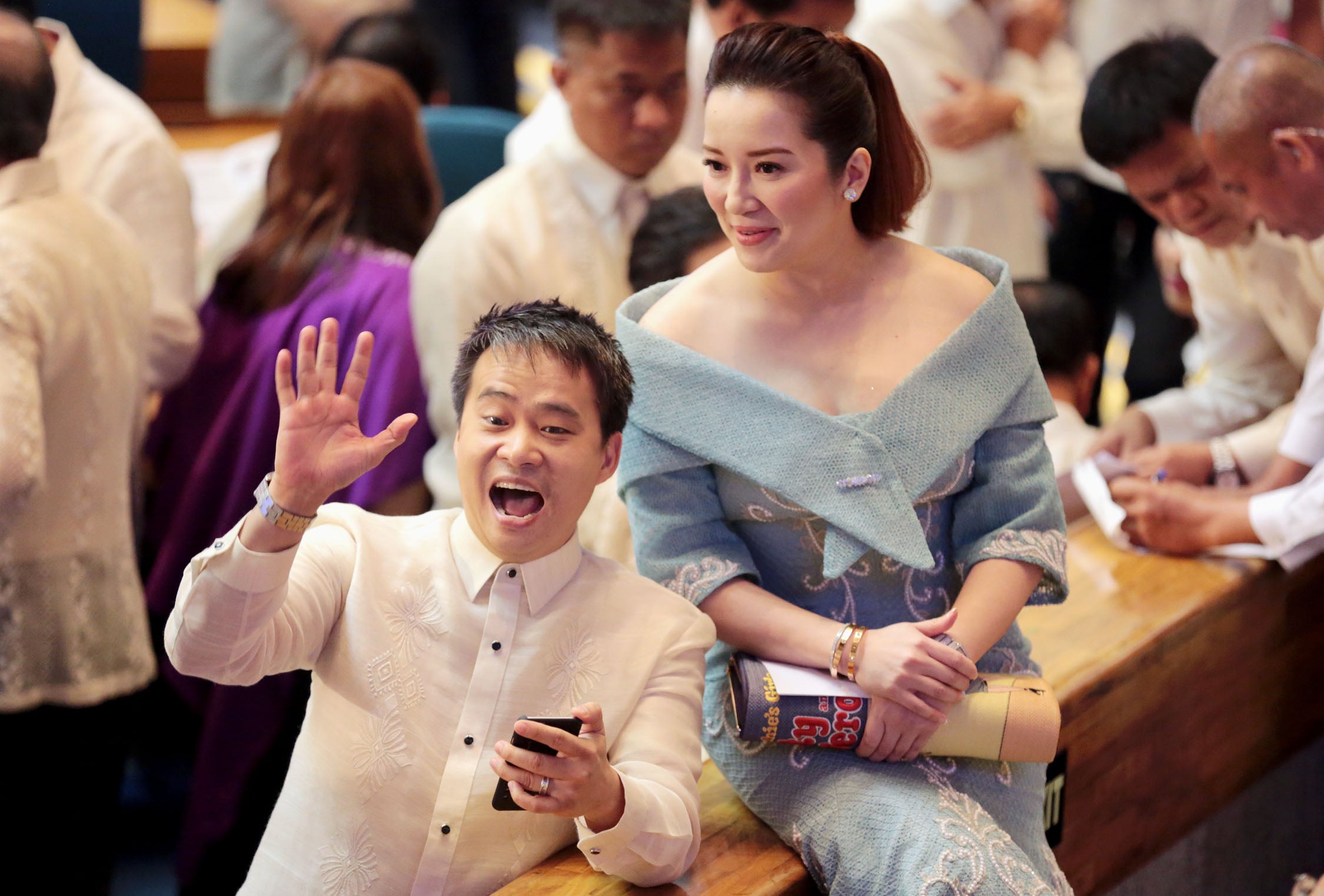 Business as usual for Sona ‘fashionistas’

Was it a sincere wish to hear President Aquino deliver his sixth and final State of the Nation Address (Sona), or was it a desire to be seen by millions of Filipinos that inspired them to dress up and attend the annual event in their respective ideas of Filipiniana finery?

Whatever their reasons were, politicians, their spouses and guests didn’t disappoint, as politics and fashion with a touch of show biz converged anew on the red carpet.

Like the previous years, no one made an effort to break from tradition by dressing down and looking business-like in more day-appropriate dresses and pantsuits.

Except for Sen. Loren Legarda’s “no expense” look, it was again business as usual for many of the women in the two red carpet venues—the north and south wings of the Batasang Pambansa complex in Quezon City.

As in Sonas past, Legarda followed her instincts by fashioning a look that combined locally made products like black platforms from Marikina and crocheted bag from Bauang, La Union province, with heirloom pieces from her late mother Bessie, such as an embroidered piña top by designer Marina Antonio and indigenous earrings from Abra province and a hammered bracelet from Kalinga province.

She wore the piña top over a sleeveless black tank top and boot-cut gym pants. She capped off the look by piling on her mother’s Vigan-made necklaces with a carved rectangular pendant of the Virgin Mary.

“It’s one of the benefits of being the only girl,” said Legarda, who was accompanied by son Lean Leviste and Batangas Vice Gov. Mark Leviste. “I was able to inherit all of my mother’s interesting pieces. I hardly spent anything on my outfit. I also wanted to feel comfortable so I opted to wear a pair of black jogging pants.”

Her colleagues may not be as fashion-savvy and as resourceful as Legarda, but they were able to hold their own on the red carpet.

Leading the pack of Instagram-ready fashion plates in the north wing were Senators Grace Poe and Pia Cayetano.

Grace Poe, who came with her family, including husband Neil Llamanzares, wore a white silk crepe terno with a gold-trimmed Sabrina neckline by Rajo Laurel. Beadwork in the form of yellow and gold rice stalks accented the gown’s butterfly sleeves and hem.

Cayetano opted for a modernized black-and-white silk terno with a series of Swarovski-accented diagonal pin tucks on the skirt and bodice by Mia Orquico. The white panel on the back formed into a train, which the statuesque lawmaker carried with ease.

Actress and endorser Heart Evangelista, wife of Sen. Francis Escudero, led the Senate spouses on the runway with her white Inno Sotto number highlighted by what appeared to be angel feathers on the sleeves.

Her simple stud earrings and a black clutch that stood out against the whiteness of her gown were enough for Evangelista to catch major attention among photographers and employees at the House of Representatives.

Tootsie Angara, wife of Sen. Sonny Angara, also slipped into a collaboration with Laurel—a two-piece dove-gray terno made of tulle and accented by lace applique. The top came with Laurel’s signature tiny butterfly sleeves. He contrasted the fitted top with a full skirt made of shimmery brocade.

“I really wanted a two-piece terno so I could pair either piece with existing pieces in my wardrobe,” she said.

Cindy Ejercito, wife of Sen. JV Ejercito, sparkled in a black column terno with a network of art deco-inspired beadwork by Paul Cabral.

Aside from Evangelista, also seen in the south wing parade was Mila Drilon, wife of Senate President Franklin Drilon, who came in a simple white piña blouse over a periwinkle strappy gown by Roselyn Lagdameo.

Mila Drilon did not wear jewelry except for a simple brooch on her left chest.

Gamboa wore a Maria Clara strewn with green embroidery over a green silk shantung skirt by Paul Cabral. She also wore a parure of white earrings and a dramatic choker.

Former Sen. Nikki Coseteng, the original queen of fashion improvisation, rummaged through her collection of printed Indian fabrics and asked her dressmaker Cora Antonio to fashion a stylized old rose terno with a purple tapis.

Fashion should be simple, she said. It shouldn’t be overthought. You don’t always need a designer to put together a look for you.

“I just collaborated with my trusted dressmaker, and that’s it,” she said.

Actress Dawn Zulueta, wife of Davao del Norte Rep. Antonio Lagdameo Jr., paved the way for the rest of the congressional spouses when she glided like a goddess in a white Cary Santiago terno with exaggerated cabbage roses on the sleeves.

Her accessories were limited to side swept bangs, dangling white earrings and a metallic white clutch.

Marga Nograles, wife of Davao Rep. Karlo Nograles, paid homage to her home region by asking designer Bobby Castillo to fashion a fuchsia terno made of Mindanao silk with lace overlay on the bodice. Her vintage-looking silver earrings and necklace were on loan from her dear mother-in-law.

The tall and svelte Fille Cayetano, wife of Taguig Rep. Lino Cayetano, wore a beige neoprene terno with embossed ornamentation on the bodice, neckline and sleeves by Cary Santiago.

Angelie Tupas, wife of Iloilo Rep. Niel Tupas Jr., grabbed attention in a maroon off-shoulder Maria Clara with a mermaid skirt by Edgar San Diego that she accented with a white clutch and a chic ’60s retro updo.

Maricon Asilo, wife of Tondo Rep. Benjamin Asilo, was in a blood-red fully beaded terno with a full skirt by Mikael Kotur. She carried a similarly colored clutch.

Marjorie Teodoro, wife of Marikina Rep. Marcelino Teodoro, wore a Royan Camilla creation with a black-and-white bodice and a peplum over a white flowing skirt.

Women lawmakers were not outdone on the red carpet.

Lanao del Norte Rep. Imelda Dimaporo was in an ombre-colored terno with a heavily beaded bodice, sleeves and hem.

Former Senate spouse Cecille Guidote-Alvarez came in an off-the-rack Tesoro’s gown that she wore with a multistrand pearl choker and earrings.

Former Akbayan Rep. Risa Hontiveros was radiant in a Joel Azebuche butter-yellow terno with a full skirt that flattered her skin tone. Her loosely clipped updo made for a youthful look.

Ashley Gabit, granddaughter of Rep. Manuel Aguiao of Kalinga, was in a traditional tapis and headdress with diagonal design.

Just before the red carpet in the south wing closed, Revenue Commissioner Kim Henares arrived in a beige piña blouse with a floor-length separate skirt. She carried a Louis Vuitton clutch.