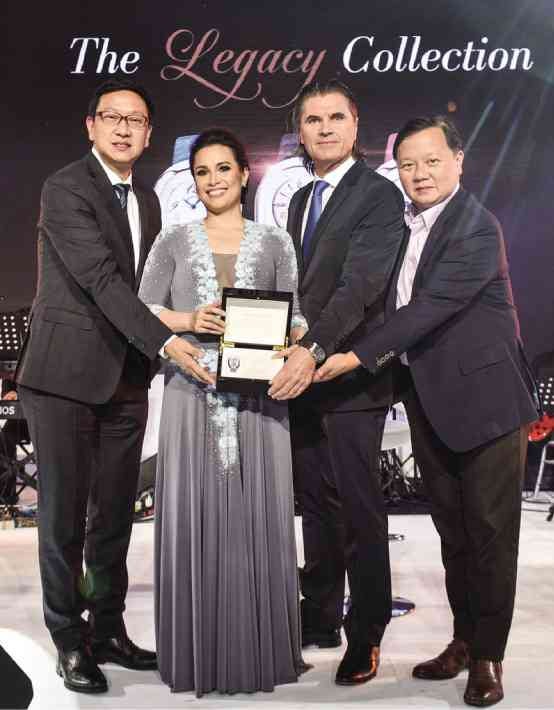 Some 200 society figures had a magical time in a trés exclusive concert dubbed “The Sound of Legacy” at the Rigodon Ballroom of The Peninsula Manila in Makati.

The event launched the latest collaboration between global Filipino artist Lea Salonga and the world renowned Philip Stein, a brand known for fusing luxury and natural wellness technology in its timepieces.

Will Stein, CEO and cofounder of Philip Stein, no less, welcomed the invitees on behalf of his wife and cofounder, Rina Stein.

“Health, well-being and living in tune—this is our passion and lifestyle,” said Will. “It has been our goal to improve people’s quality of life through our Natural Frequency Technology, stylish design and quality craftsmanship…”

He then introduced a video highlighting Lea’s achievements before she proceeded to sing. The audience gave her a standing ovation. “I couldn’t be prouder to have you as our ambassador,” Will said.

And then the guests were asked to lift the glass cloches on the tables to reveal Philip Stein Legacy Collection watches hidden underneath.

The Legacy Collection, along with the Lea Salonga Legacy Limited Edition watch, will be distributed exclusively in the Philippines at Lucerne, dahlings.

As a nod to Lea’s birth date (Feb. 22), only 222 pieces were made of the Lea Salonga Legacy Limited Edition watch. The Legacy Collection is available in Philip Stein boutiques, Lucerne, Chronos, Wrist_Pod and SwissGear stores nationwide.

The launch of the brand-new SilverKris Lounge at Terminal 3 of the Ninoy Aquino International Airport was well-attended.

“Home Away From Home” is the new concept that SIA is introducing at all SilverKris Lounges worldwide. It wants customers to experience the familiar ambience of comfort and hospitality that extends from the ground to the air to the ground, epitomized by the signature personalized service that the airline is known for.

“Manila is our fourth station globally after Sydney, Hong Kong and London and the first in Southeast Asia to have this new concept. This is a multimillion dollar investment to renovate our 15 lounges across the world,” said the airline’s senior marketing and PR executive Camille Rose Pacis.

“Launching our new SilverKris Lounge concept in Manila is especially meaningful as the Philippines has always been known for its traditional warmth and hospitality, and it is a very important market for us… We are proud to reaffirm our commitment to the aviation and tourism industry here,” she added.

Starting August, SIA customers will also get to enjoy a new cabin class, Premium Economy, to destinations such as Sydney, London, Paris and more on the airline’s A380s, B777-300ERs and A350s.

Last week we wrote about Philippine Tatler Traveller’s unveiling of its latest luxe volume held at the ballroom of Raffles and Fairmont Makati.

The magazine’s cover was shot in Paris, no less, and featured best of pals Barbara Aboitiz and Sevrine Miailhe.