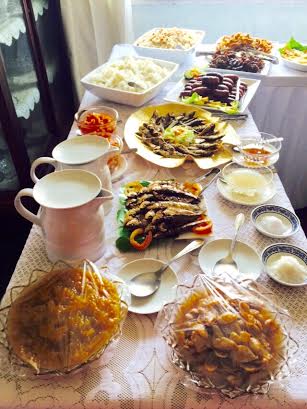 I was just in Bulacan for a culinary tour that I organized for my students. Every time I go to the countryside to acquaint myself with our traditional cuisine, the discoveries never cease to amaze me.

We had breakfast in a bahay-na-bato, a generic term for houses built during the Spanish period according to José Roly G. Marcelino, head of the Arts and Culture Section of Malolos City Tourism Office.

The Tanjosoy house in Malolos was inherited by Antonio S. Bautista, aide-de-camp of Gen. Emilio Aguinaldo, from his grandmother, Rufina Tanjosoy Santos. Roly said the 1812 structure was remodeled by Emilio Alvero in the early 1900s in the style of Isabelo Tampinco.

The structure survived a revolution, the Filipino-American War and World War II. It even became the headquarters of the Japanese. Upon the passing of Antonio and his wife Loreto Bautista, their daughters Carmen de los Santos and Felicisima Buendia inherited the house, along with its rich history and tradition.

Carmen’s daughter, Loreto “Lori” Bautista de los Santos, welcomed us to their ancestral home with a spread that was typical of what her grandparents served.

Lori called the spread simple though I believe it was a luxury in this day and age. Most of the beautifully arranged offerings were homemade with a few exceptions.

De los Santos instructed us to pour the carabao’s milk on top of the hot rice then sprinkle it with salt and/or sugar. The rice is best savored with the meats.

The second combination of champorado and tuyo was a family favorite during the rainy season.

Simple as it was, the quality of the ingredients made this delicious. Short (round) grain malagkit rice cooked with real tablea and water, and finished with pure carabao’s milk, sugar and flaked tuyo.

A heavier breakfast was prepared later in the morning. The pugon-baked boling from Lazaro bakery with quesong puti and butter was wonderful! Slightly sweet, soft but chewy. It is deliciously addicting not just for its taste but more for its texture.

The hamon was a Sunday and holiday addition to their breakfast table. The family makes their own Chinese-style ham. They call it Hamon Maloleño. Lori recalled how the women in the kitchen inject the ham with the curing solution twice a day. The ham is then cured for two to three weeks.

After curing, it is cooked in pineapple juice, sugar and pineapple chunks until tender. The ham is then baked, crusted with brown sugar and studded with cloves.

The sauce was made from the remaining cooking liquid that has been sweetened with honey and sugar, and cooked until thick.

The fourth menu was borne out of Loreto’s love for sweet and crunchy. Hamonadong longanisa (the one made by Lori’s classmate Gina Buidon is closest to their family recipe) and tawilis. Both pair perfectly with fried rice, fried egg, tomatoes and salted egg.

Fruits jams and fruits in syrup, made from produce from the backyard, were part of every meal. At the Tanjosoy house, minatamis na haleyang bayabas and mangga were favorites.

I enjoyed the coffee immensely! The distinct flavor of toasted rice, made rich by the creaminess of carabao’s milk and the addition of a bit of sugar, made my cup all the more sublime!

In between sips, Lori shared memories of how her mother would meet their kasama (tenants) in the backyard of their house on weekends. This was when the harvest from their bukid and rivers were brought to them.

The affluent, said Roly, had most of their needs brought to their homes. Chickens, eggs, fruits, vegetables, carabao’s milk—all these were brought to the landlord’s kitchen. The supply was enough to last a week.

“I loved weekends,” Lori said. “It was when my cousins would come home and sleep in our house. During weekends breakfast was extra special. ” This was the time large carajays of Lola Loreto’s pastillas tostado (a recipe that Lori still makes and sells) were prepared for visiting relatives to bring back with them to Manila.

Lori and Roly’s stories went on and on. Their tales were a bite back in time.