Who’s Joe America? Why did he make it to Aquino’s Sona? | Inquirer Lifestyle ❮ ❯ 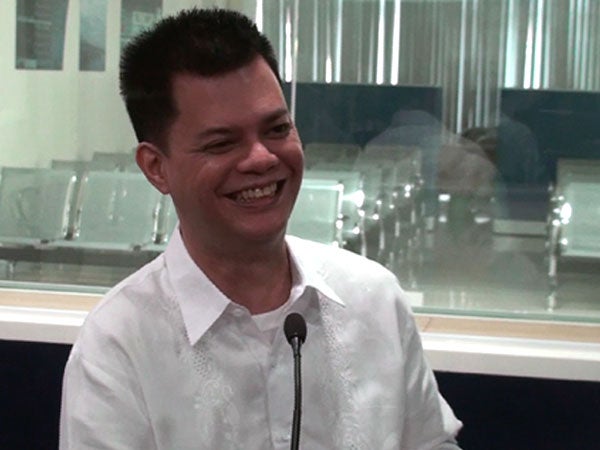 Is he or isn’t he? Undersecretary Manolo Quezon in a guest visit at Radyo Inquirer office a couple of years ago. INQUIRER FILE PHOTO

Who’s Joe America? Why did he make it to Aquino’s Sona?

There are political pundits who strongly suspect that Joe America, the anonymous blogger whom President Aquino quoted in his sixth and last State of the Nation Address (Sona) last week, is the Chief Executive’s head speechwriter, Undersecretary Manuel “Manolo” Quezon III.

The blogger, who describes himself in joeam.com as “a permanent resident in the Philippines” was thrust in the limelight on Monday, when Mr. Aquino mentioned him toward the end of a list of administration officials, close friends and family members he thanked in his final Sona.

The President noted how, even if the blogger wasn’t known to him, Joe America wrote: “If the President were in my foxhole, I’d watch his back. That’s because I trust that he is watching mine.”

(The quote was lifted from an entry, “President Aquino: Like a Beat Up Old Car,” that Joe America posted in 2012—before controversies such as the Mamasapano massacre, the Priority Development Assistance Fund and Disbursement Acceleration Program surfaced.)

The Joe America quote was met with thunderous applause at the session hall of the House of Representatives.

Two days after the Sona, Joe America posted that Mr. Aquino’s acknowledgment of his statement “was a stunner.”

“It put me into a catatonic state for about five minutes as I contemplated what had just happened. It was an out-of-body experience, that I somehow ended up on the big screen with the President repeating what I had written,” he added.

Joe America, who arrived in the country in 2005, also noted that “speculation since has been quite humorous” about his real identity, especially after Quezon’s name came up.

“Some guess that blogger JoeAm is none other than the President’s Communication guy, former blogger Manuel L. Quezon III (MLQ3). Or JoeAm is a journalist for hire, or he has a direct connection with the Palace,” he pointed out.

Ten years in the Philippines and Joe America already understands that people’s comfort zones sometimes involve a lot of skepticism.

“I mean, this is the Philippines, right? And what we see obviously cannot be the truth. There are games being played somewhere. We are being manipulated by someone. Someone is making money somehow. That’s the way it works in the Philippines,” Joe America complained.

“Conspiracies spring eternal” was Quezon’s succinct reaction through e-mail when asked about suspicions that the blogger is his alter ego, if not a creation of the Liberal Party (LP).

A veteran journalist in the broadcast industry maintained that if Joe America is not Quezon, he is definitely a huge supporter of Interior Secretary Mar Roxas, whom President Aquino endorsed as the LP standard bearer on Saturday.

This is because Joe America offers very solicitous opinions about Roxas.

Besides, Joe America also just recently posted a scathing entry against Sen. Francis Escudero (“It’s all about Escudero: the future of the Philippines”), considered as the stumbling block in the LP’s plan to convince Sen. Grace Poe to become Roxas’ running mate.

This should not be an issue, really, except that Roxas’ staff allegedly alerted reporters to Joe America’s piece about Escudero.

(We attempted to get comments from Roxas, Poe and Escudero about Joe America. Their media officers have yet to give statements at press time.)

Deputy presidential spokesperson Abigail Valte is confident that Joe America is a real person who is not employed by Malacañang.

“He… has revealed his identity to me, something which I appreciate,” Valte said in a solicited e-mailed statement to Inquirer Lifestyle.

“While I cannot divulge what was said to me in confidence, I can say for a fact that he is not Undersecretary Manolo Quezon, as some allege,” she added.

Valte said a friend from the private sector alerted her about Joe America’s blog in 2013 after the friend “sent me one of his blog posts.”

Quezon said he first stumbled upon Joe America in 2010 “when he was still in blogspot.com.”

The suspicion that Quezon and Joe America are the same person stems from the fact that both are eloquent thinkers capable of writing incisive analyses of current events.

Quezon is a former Inquirer columnist. He also wrote a column in the defunct Today newspaper and was a current events commentator on ANC before he joined the Aquino cabinet as undersecretary and officer in charge of the Presidential Communications Development and Strategic Planning Office.

Joe America gives educated opinion, and has good things to say about President Aquino even if, as Quezon points out, he disagrees sometimes with the chief executive.

That his opinions are delivered with careful study also makes it hard for critics to label him a brainless fanatic. Besides, his followers are evidently as learned as he is.

A quick perusal of the comments on his blog hardly shows any of the rabid doggerel written by those who react to the blogs or websites of more pedestrian personalities.

“As a blogger myself, I have always preferred bloggers who welcome diverse views and have interesting thoughts of their own, yet are firm in insisting that dialogue should be frank and respectful. For that reason I respect his blog a lot,” Quezon told Inquirer Lifestyle.

“I find (Joe America’s) views interesting because it is a foreigner sympathetic to the country, someone who has put down roots here. His out-of-the-box approach to issues and policies make for a refreshing change,” he added.

The website Spot.PH, however, was quick to point out that Joe America has an apparent dislike for Senator Poe. It also agrees with the broadcaster that he is an admirer of Roxas.

Meanwhile, those who monitor Joe America also notice he is critical of Vice President Jejomar Binay and his dynasty.

From his blog, Joe America said he has a Filipino wife and is a “culturally ambidextrous son.”

He “lived for a time in Northern Mindanao and Zambales” but now resides in “a rural rice-growing area” in the Visayas. It is believed that he lives in Biliran in Eastern Visayas.

Joe America also describes himself as a “retired bank executive with degrees in Mathematics and Radio and Television Arts.” He is well-traveled and had a 30-year career in Los Angeles.

“One of these days he’ll do a biography, but right now he doesn’t think that is so very important,” the blog said.

Valte said she admires that Joe America takes time to answer her e-mails to him.

“Whenever I have a comment about a post, I just e-mail him directly via the e-mail address provided on his blog. He’s also been kind enough to respond to me on several occasions,” she noted.

Quezon said that while Mr. Aquino and Joe America are not acquainted, “the President has always appreciated the positive and encouraging approach to his presidency shown by Joe America.

“Even when Joe has disagreed with the President, as he has many times, the President has always welcomed all points of view, as long as they are willing to be part of the solution and not the problem,” Quezon added.

“This, I think, is the reason… (Joe America) earned the President’s respect,” Quezon noted.

Aquino thanks everybody except Binay

National Artist: It’s a presidential award, after all