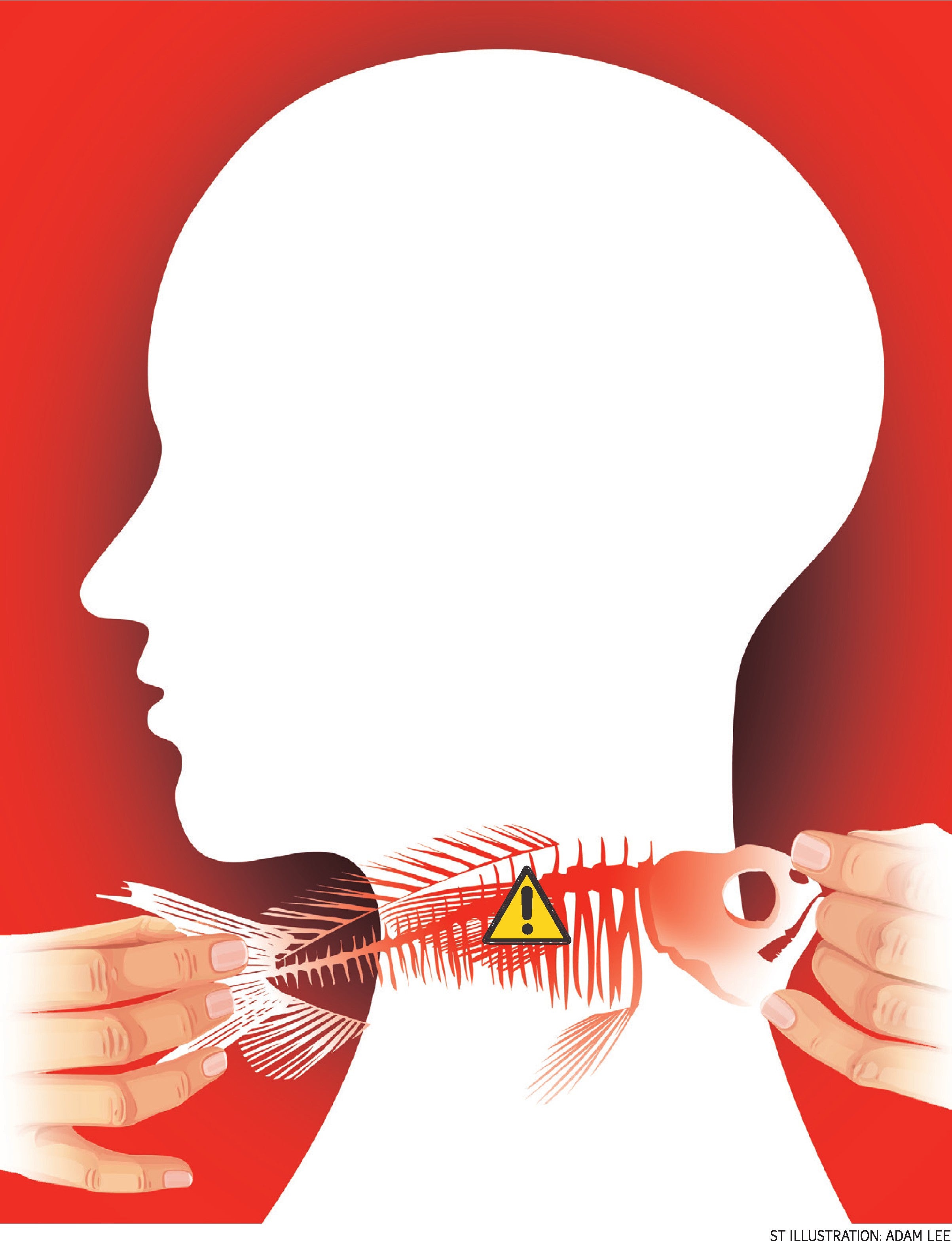 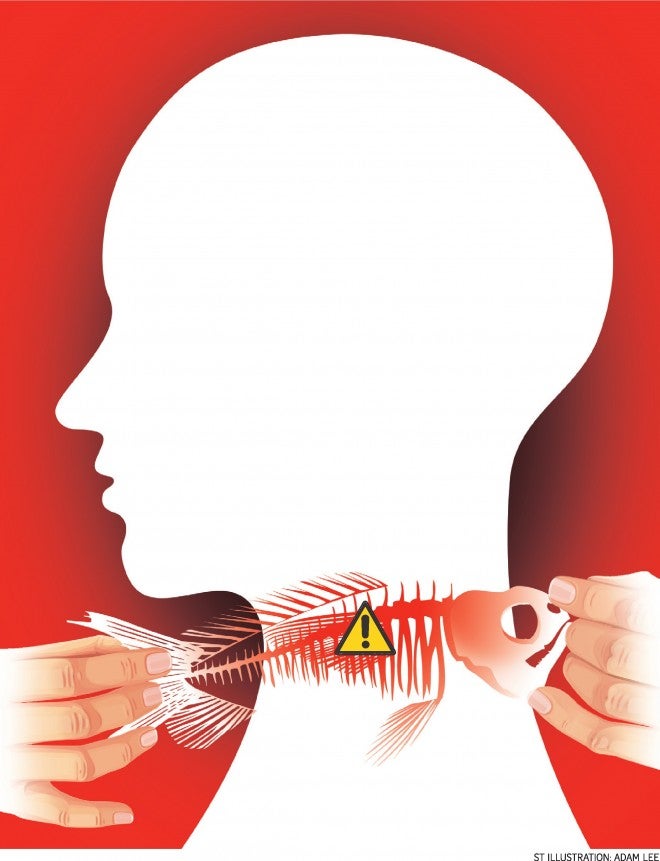 Swallowing fish bones is a common accident in Singapore – and uniquely so, doctors say.

It ranks as the top referral from emergency departments to ear, nose and throat (ENT) doctors at three major public hospitals here – ahead of problems like nose bleeds and breathing difficulties.

A recently published study by local doctors has now crystallized three factors for this occurrence.

Wearing dentures, using utensils to eat fish – instead of using fingers – and the habit of “deboning” the fish in the mouth were linked to a higher risk of ingesting fish bones.

The findings, published in the June edition of Singapore Medical Journal, were based on 112 patients who showed up at Tan Tock Seng Hospital (TTSH) between 2009 and 2010 complaining of having accidentally swallowed fish bones.

Among these patients, 28 percent wore dentures, which is deemed to be a significant proportion. Most of them – 86 percent – also reported using utensils, either chopsticks or a fork and spoon, to eat the boned fish. The rest used their fingers.

Nearly 40 percent put the boned fish in their mouth and used their tongue and teeth to separate the flesh before spitting the bones out.

Other factors, such as vision problems, gender and age, were not found to be significant.

Researchers believe that wearing dentures is a key risk factor as they impair one’s ability to sense fish bones and spit them out in time.

“Dentures reduce the contact between food and the sensory lining of the gums and hard palate,” said lead author Shalini Arulanandam, an associate consultant at the department of otolaryngology at Singapore General Hospital (SGH).

Using the fingers to eat fish may also be a lifesaver, as it enables one to feel sharp bones more easily. “The tactile advantage gained when one eats using the fingers may explain the lower observed incidence of ingested foreign bodies among Malays and Indians, who traditionally eat using their fingers,” the researchers wrote.

Every day, people show up at hospitals islandwide with a fish bone-related emergency. They are referred to an otolarynologist for treatment.

National University Hospital’s (NUH) otolarynology department handles three or four such cases a day. SGH gets about 30 to 50 cases every month, while TTSH handles about 70 such cases a month, which adds up to about 850 a year. “Ingesting fish bones is the top otolaryngology emergency referral,” said Associate Professor Siow Jin Keat, a senior consultant at the ENT clinic at TTSH.

Dr. Barrie Tan, head and senior consultant at SGH’s department of otolaryngology, said the presence of foreign bodies in the throat and esophagus is one of the most common emergencies handled by his department.

Dr. Shalini noted that this problem is “quite unique to Singapore,” adding that it is rarely reported in Western nations.

It led researchers to think that cultural factors could play a role, such as the practice of removing fish bones in the mouth.

Fish bones that are stuck in the area above the esophagus can be easily removed in an outpatient procedure, said Dr. Tay Sok Yan, an associate consultant at NUH’s department of otolaryngology (ENT) – head and neck surgery. This is done using a flexible bronchoscope that is inserted through the nose, she said.

“If the bone is in the tonsil, we can also easily remove it using a special type of forcep,” added Dr Tay.

However, things get complicated if the bone is stuck in the esophagus. Said Dr. Tan: “The patient has to be taken to the emergency operating room and a procedure known as rigid esophagoscopy is done.”

This involves inserting a long, hollow metal tube down the throat. A light attached to the tube allows the doctor to see where the bone is. He then removes it with a long forceps.

If the fish bone can be visualized, such as in medical scans, the success rate of its removal is 99.5 per cent, said Prof. Siow.

Complications from swallowing fish bones are rare, but they can be serious, such as the perforation of a major artery, the aorta.

Dr. Shalini hopes the study can be used to guide doctors and patients on the preventive measures to take.

“Doctors who treat such patients can do a quick survey, educate them on the risk factors and, possibly, help them avoid a recurrence.”