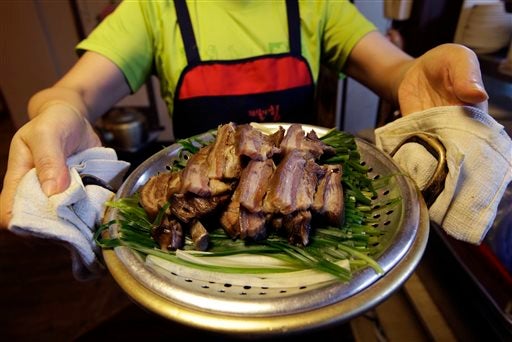 In this photo taken on Tuesday, Aug. 12, 2014, an employee of Daegyo, the dog meat restaurant, shows a dog meat before serve to customers at a restaurant in Seoul, South Korea. Daegyo, the famous dog meat restaurant she opened in a Seoul alley in 1981, will serve its last bowl of boshintang, or dog stew, on Friday, a reflection of the challenges facing a trade that is neither legal nor explicitly banned under South Korean laws governing livestock and food processing. (AP Photo/Lee Jin-man)

Nineteen Korean food companies are being featured in the ongoing 15th World Food Expo at the World Trade Center at the Cultural Center of the Philippines Complex, Pasay City.

The Korean companies are supported by the Korean Agro-Fisheries and Food Trade Corporation, a major government agency in Korea.

Food expo organizers said they are inviting food lovers to avail themselves of the free food samples prepared by Korean chefs.