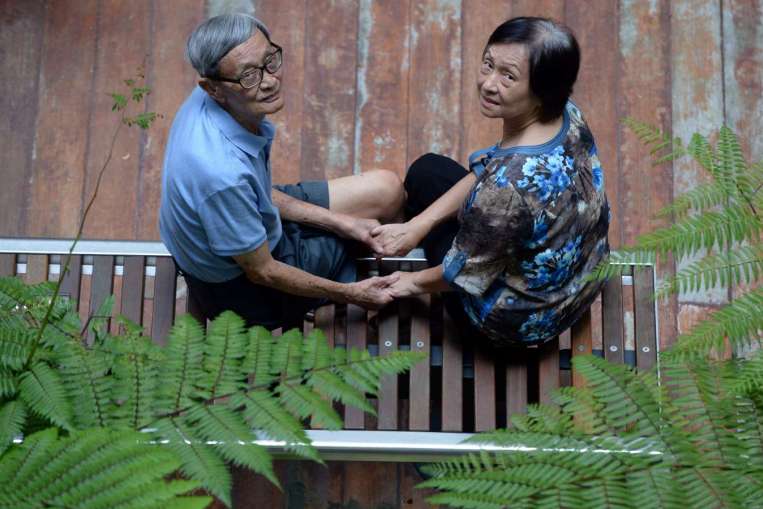 Mr Kwan Kai Foo got his aunt to introduce him to Madam Wong Ngit Mui and they started dating. Their favourite haunt was Kallang.ST PHOTO: DESMOND FOO

When an English-speaking teacher met a village beauty

He saw her as a beauty unlike any other. The thought of a stable life and future appealed to her.

Retired teacher Kwan Kai Foo, 83, and housewife Wong Ngit Mui, 72, were attracted to each other for different reasons and have stayed married for the past 50 years.

They celebrated their golden jubilee on May 30 with a trip to Bali.

“I always saw this girl around. She was very attractive.

“I wondered how I could get to know her,” said Kwan, who was dressed in light blue pyjamas as he recounted his love story to The Straits Times in their one-room flat in Buangkok Drive.

He said he had asked his aunt to introduce him to her and they soon started going out on dates. Their favorite haunt was Kallang and both loved eating for fun.

Although they had dated for a year, they rarely held hands.

Madam Wong said: “He was a teacher. He had a good education, so I chose him. There were very few teachers in those days, and even fewer knew English.”

Kwan also used to teach her the English language.

But the roles are somewhat reversed today. He is now hard of hearing and she has to yell instructions into his ear.

But she is patient with him, even as he recounted his experience with the invading Japanese forces during World War II.

She gently reminded him to stay on the topic.

After several attempts to recall where they held their wedding banquet, they finally agreed it was held at Lai Wah Restaurant in Bendeemer, where suckling pig was served, two months before Singapore was separated from Malaysia.

Today, they have three children in their 40s. But parenthood had not been easy.

They aborted their fourth child because of their tight financial situation then and the Government’s Stop-At-Two policy, having been fined $50 when their third offspring was born. Said Kwan: “In retrospect, it wasn’t a good policy.”

The secret to staying together all these years, they said, is because both were committed to putting their children first. “We didn’t flare up often,” Kwan said. “We didn’t want to fight in front of our children. We worked hard at protecting our marriage.”

Madam Wong is pleased that her life partner has never drunk alcohol or smoked.

“He has been a good husband. He took care of the household well. We don’t have to tell each other we love each other to know that we care for each other.”