A perfect match, right down to the clothes they wear | Inquirer Lifestyle ❮ ❯ 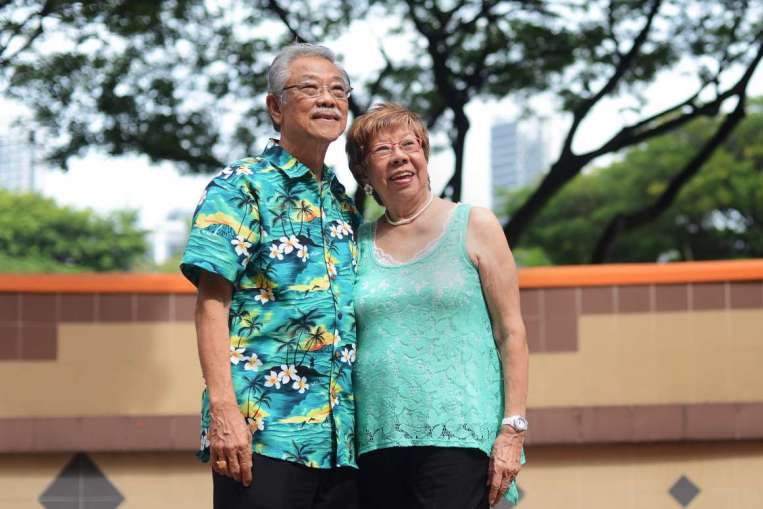 Mr Patrick Ng and his wife Ruby make it a point to co-ordinate the colour of their outfits every day. Their secret to marital happiness? Kiss and make up before bed each night and treat each day together like it is your first date.PHOTO: MATTHIAS HO FOR THE STRAITS TIMES

A perfect match, right down to the clothes they wear

SINGAPORE — Ruby and Patrick Ng are a good match for each other – they coordinate the color of their outfits and have had the habit of doing so since they got married in 1965.

Mrs. Ng, 78, and Mr. Ng, 77, usually plan their attire the night before, picking vibrant colors such as orange, green and purple to match their outgoing personalities.

If she chooses a lacy green top, he picks a Hawaiian shirt in floral print. Taking the outfit coordination a step further, she slips on a pair of floral ear studs.

“It feels weird if we’re not in matching clothes. Even our friends expect us to show up in the same colors. It’s something Ruby suggested we do for fun after we got married and we’ve kept to it ever since,” said Mr. Ng.

The lovebirds, who celebrate their golden jubilee on November 13, have been inseparable ever since Mrs. Ng asked Mr. Ng out for a dance in 1963. Mr. Ng, who said he was attracted to her “sexy legs” and beauty, was stoked. Their 11/2-year-long courtship took them to places such as the Metropolitan YMCA in Palmer Road where they spent their Friday evenings folk dancing.

They said they enjoy spending every waking moment together.

Working life was the toughest, because that meant they had to spend long hours apart. Mrs. Ng eventually retired from her job as a secretary when she was 52. He retired from a stockbroking firm at 60.

The couple, who have lived in a three-room flat in Toa Payoh since the 1970s, have no children.

He influenced her to pick up tennis in her 30s, golf in her 40s and the ukelele in her 60s.

The duo, who are part of the Organization of Senior Volunteers (RSVP Singapore), are members of the Peranakan Association Singapore’s choir and volunteer together at Dover Hospice. Mr. Ng is also a ukelele trainer at U Live NTUC, a club for active senior citizens.

Mr. Ng said he “felt lost” when Mrs. Ng was on holiday in Australia last year. “It felt like a big part of me was missing. I wondered what I should do with my day,” he said.

Mrs. Ng described her husband as a true and caring gentleman. “He even unfolds and places the napkin on my lap when we go for dinners and buffets. My friends laugh and say that I’m pampered,” she said.

Today, she helps Mr. Ng, who runs ukelele classes for seniors at community centers and companies.

She helps the students tune their instruments while her husband runs the class.

Their secret to staying together: kiss and make up before bed each night and treat each day together like it is your first date.

Mr. Ng said: “It’s important to express yourself. Shower her with goodnight kisses; tell her you love her. These are very important words. You should not take your spouse for granted.”

When an English-speaking teacher met a village beauty