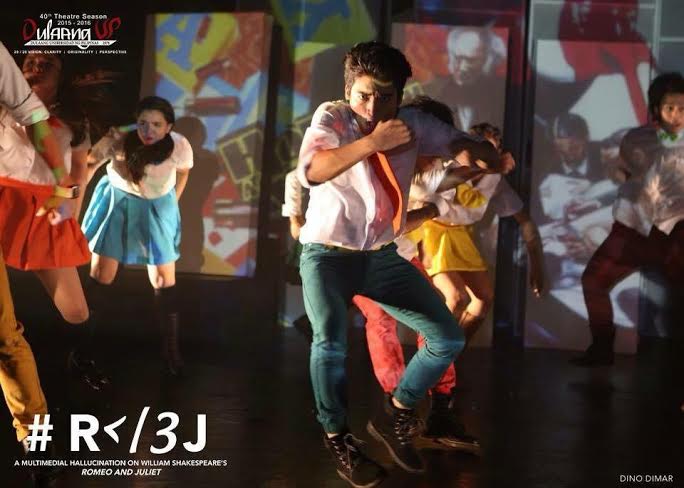 Opening the new Dulaang UP season is “#R</3J: A multimedia hallucination on William Shakespeare's ‘Romeo and Juliet,’” adapted by Guelan Luarca, with music by Krina Cayabyab and direction by DUP’s new artistic director Dexter Santos. PHOTO BY DINO DIMAR

Starting this year, principals and teachers of high school students (and other colleges) are advised to re-calibrate the schedules of when they send students to watch the productions of campus-based theater groups due to the revised academic calendar of universities: what used to be June to March is now August to May.

“#R</3J: A multimedia hallucination on William Shakespeare’s ‘Romeo and Juliet’” will be set in Metro Manila in a staging that “exploits our hyper-real contemporary moment of globalization, ultra-violence, Internet inanities, intergenerational alienation” and will use “a psychedelic mix of all available arts,” announced DUP.

The tragic love story between star-crossed lovers is adapted by Guelan Luarca and will be directed by DUP’s new artistic director starting this season, Dexter Santos, with music by Krina Cayabyab. The production runs from Aug. 19 to Sept. 16.

Up next is a back-to-back staging of Shakespeare’s “King Lear” in English and Filipino. The adaptation is by Nicolas Pichay, and direction by DUP founding artistic director emeritus Tony Mabesa.

Mabesa will set the play in the waning years of a mythical Southeast Asian kingdom. The production runs Oct. 7-25.

Gynt’s encounters with trolls and other creatures and his travels to different locales will be adapted using Philippine mythological entities and local folklore. The show is scheduled for Feb. 3-21, 2016.

The season ends with the English and Tagalog translations of Shimizu Kunio’s “The Dressing Room: That which flows away ultimately becomes Nostalgia.”

The play is about four actresses preparing for a production of Anton Chekhov’s “The Seagull,” who soon discover that not all is as it seems.

The English translation is by Chiori Miyagawa, the Filipino translation  by Pichay and direction by Alex Cortez. It is scheduled from April 13 to May 1, 2016.

All productions will be staged at Wilfrido Ma. Guerrero Theater, Palma Hall, University of the Philippines Diliman, Quezon City.