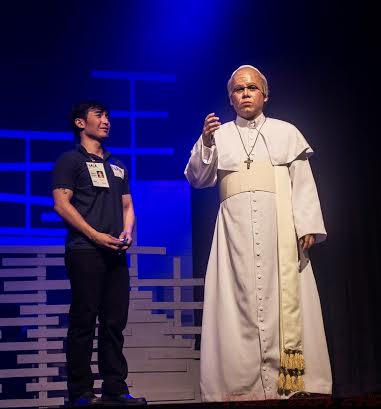 Filipino-speaking Pope Francis is the star of Philstagers’ new musical

In January, Philippine Stagers Foundation (PSF) artistic director and actor-director Vincent M. Tañada was thinking of doing a play about the great artist Juan Luna whose life was, after all, full of drama. Then Pope Francis swept into town and conquered Manila and the rest of the country.

Caught up in the general fervor, in the style which only Pinoys can dish out, Tañada brought his four-year-old son Spidey to Luneta (Rizal Park) to listen to the Pontiff. But it rained hard and he and Spidey got soaking wet.

The concerned father made what he called a pact with God. If his son didn’t get sick, he would forget the play about Juan Luna and instead write a play about the Holy Father and his electrifying effect on the multitudes.

Whether miracle or just coincidence, Spidey didn’t get sick.

“I guess that was the sign,” says Tañada. So he shifted gears and started to research on the life on the charismatic spiritual leader of the world’s 1.2 billion Roman Catholics. He read books and browsed through the Internet, but found as far as his taste was concerned that Francis’ life was too “Argentine.”

“My thrust is always towards Philippine culture, Philippine history,” says Tañada. “So if I just focused on his life (which included being a bouncer in a bar), hindi papasok ang advocacy.”

Then an epiphany set in. What the playwright-librettist decided was to look for modern-day Filipino heroes whose lives were touched by the Pope and to make the musical he was envisioning in his head unfold through their eyes.

He found this in five persons: the late artist Joey Velasco, famous for his painting of the Last Supper showing Christ surrounded not by his 12 apostles but by malnourished children; Kristel Mae Padasas, a Catholic Relief Services volunteer accidentally killed in Tacloban City; Dr. Edgardo Gomez, a National Scientist known for his work on marine life; Ronald Gadayan, an honest janitor at the Ninoy  Aquino International Airport; and SAF officer Mark Lory Clemencio, a gallant police officer killed during the Mamasapano massacre.

The PSF musical play, titled “Pope-pular” and starring Tañada as a Filipino-speaking Papa Francisco, premiered on July 24 at Adamson University in Manila, and will be playing during weekends in venues across the country until March next year.

The music is by PSF composer Pipo Cifra, a graduate of the University of Santo Tomas Conservatory of Music, major in piano and composition.

“The five had a simple heroism, so it’s not necessary for us to be extraordinary to become heroes,” says Tañada. “It’s their spirituality that made them heroes as they tell their stories.”

As for the play itself, “it is not preachy; we are not trying to convert people. What the play is trying to show is that regardless of your religion, you have one God. Some have commented online that they have found it entertaining, educational and even life-changing.”