Sanso brushstrokes away from being Filipino | Inquirer Lifestyle ❮ ❯ 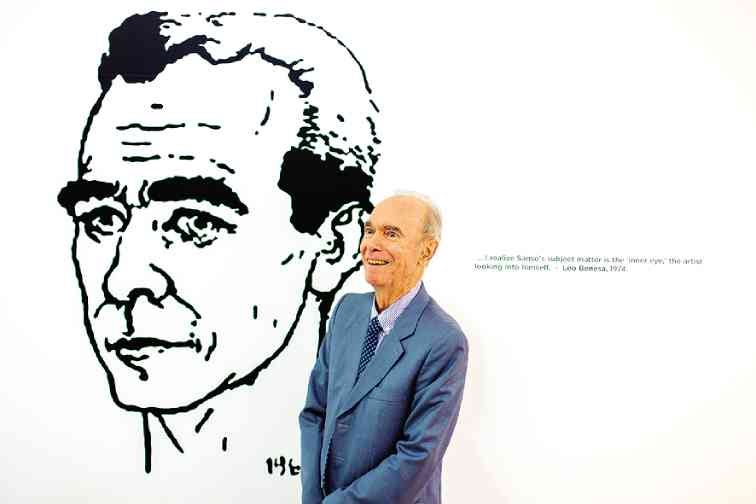 JUVENAL Sansó at Fundacion Santiago, before blown-up sketch of himself that he did in 1964. On the wall is inscription, an excerpt from the late critic Leo Benesa: “I realize that Sansó’s subject matter is the ‘inner eye,’ the artist looking into himself.”

Sanso brushstrokes away from being Filipino

Juvenal Sanso’s dream of attaining Philippine citizenship is just a few brushstrokes away from completion.

Iloilo Rep. Niel Tupas Jr. said a bill granting Filipino citizenship to the internationally renowned Spanish-born painter was approved by the House before it adjourned sine die in June.

The lawmakers called Sanso a “master painter whose heart has always been Filipino.” Sanso’s citizenship is seen as the only stumbling block to being a National Artist of the Philippines.

Sanso arrived in the Philippines as a 4-year-old boy in 1934 with his family who decided to settle here.

His father was a sculptor who formed “Arte Español,” famous for its ornately classic wrought-iron furniture. But it was on canvas that Sanso found his expression. The main office of the Inquirer in Makati City is located where the cavernous Arte Español factory and showroom used to be. His passion for art was stoked and honed at the University of the Philippines School of Fine Arts where he learned under Filipino masters Fernando Amorsolo, Guillermo Tolentino, Dominador Castaneda, Torribio Herrera and Ireneo Miranda.

In 1952, Sanso went to Europe to take formal art lessons in Rome and Paris.

As Sanso’s talent and fame spread in Europe, the United states and Asia, the painter has always been widely referred to as “Spanish by birth but Filipino at heart.”

Sanso spent between two and three months every year in Manila until 2002 when he decided to retire and live permanently in the Philippines.

“Sanso is now 84 years old. Part of his many continuing commitments to his beloved Philippines was to give scholarships to promising Filipino students,” the lawmakers said.

Sanso helped in making valuable artworks accessible to the public as a member of the UP College of Fine Arts Alumni Foundation. He also served as mentor to students joining the Shell National Artist competition.

Sansó: ‘Why I could not go around being an Amorsolo’