‘Singin’ in the Rain’ will splash its way into your heart | Lifestyle.INQ ❮ ❯ 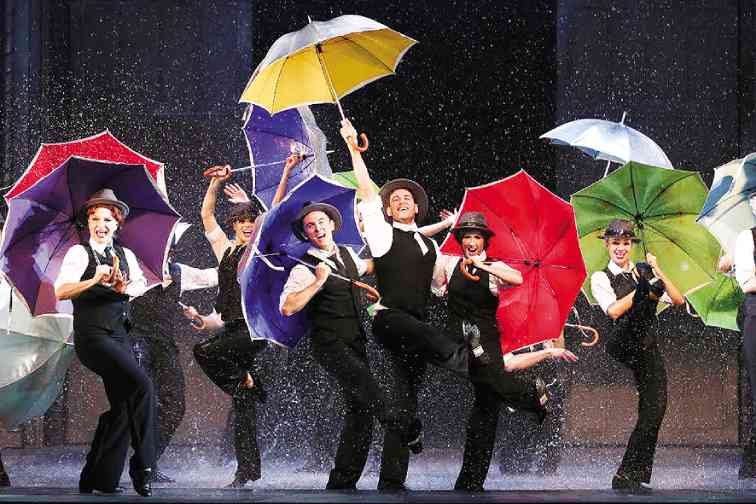 A FEAST for the senses! The cast kicks up a storm with multi-colored umbrellas. HAGEN HOPKINS

‘Singin’ in the Rain’ will splash its way into your heart

Fabulous costumes, tons of water splashing on stage, a charming romantic comedy for a story and one catchy melody make the sensational production of “Singin’ in the Rain” a fantastic show to watch.

I was fortunate to catch the show in Singapore last month and I hope to see it again when it debuts in Manila on Aug. 20 at The Theatre at Solaire.

Tim Yap, Pepper Teehankee and I were impressed by the charm, romance and glamor of the musical. We recalled the original movie and songs, the classic dances and all the tinseltown memories from when we were kids.

“Singin’ in the Rain” premiered at the Chichester Festival Theatre in United Kingdom and was staged at the Palace Theatre until 2013. It’s been a sellout at the West End, has garnered four Olivier Award nominations and is now on a world tour.

The Manila run is produced by Lunchbox Theatrical Productions and Concertus. James Cundall, chief executive of Lunchbox and Bambi Rivera-Verzo, managing director of Concertus, invited Tim, Pepper and I to catch the Singapore run.

After the show, we joined our friends Dr. Z and Aivee Teo for dinner and drinks at Mozza, where the head is Filipino chef Kara Mendoza. The Mario Batali-owned restaurant at Marina Bay Sands might open in Manila soon, so we are all looking forward to that.

This year is the busiest ever for Lunchbox and Concertus, and will be a bumper year for theater lovers. The producers that brought us “The Phantom of the Opera” and “Wicked” have a few more shows lined up for the Manila crowd, including “La Soirée,” “Louis Pearl, The Amazing Bubble Man,” “Beyond the Barricade” and “Cookin’ Nanta.”

To book advance tickets, use your Visa card on www.visa.com.ph and get a 10 percent discount up to August 15.

“Beyond the Barricade” is a concert by past principal performers from “Les Misérables,” and includes hit songs from West End shows like “Phantom” and “Miss Saigon.” It will run Oct. 7-8 at the Romulo Auditorium.

“Cookin’ Nanta” is a non-verbal performance with a Korean twist and runs Nov. 10-15 at The Theatre at Solaire. Tickets available at Ticketworld, 8919999 or www.ticketworld.com.ph.

Straight from my Singapore trip, I joined the very artsy cocktail party and collection exhibit of Piquadro, the premium Italian leather luggage, bag and accessories brand that launched its latest collections by the uber-talented designer Giancarlo Petriglia.

The Axon Room of Green Sun in Makati was beautifully transformed into an art gallery exhibiting just some of the fine works of Piquadro’s and Petriglia’s collaborations in silhouettes that highlighted the briefcase, the trolley, the handbag, the messenger bag, as well as small leather goods.

Inspired by, and an extension of, Piquadro Italy’s Opera collection launch, the gallery was redesigned into a Creative Lab where unique art installations were designed and built based on each collection’s personality and look. These collaborations with Petriglia put a new creative spin on the very technical Piquadro, thus taking functional style to the next level.

Showcasing and highlighting this new perspective were the creative and playful product displays of the latest collections, set up around the venue with artistic representations of each line projected on the walls.

These art installations were customized to each collection’s personality and “vibe”—the palette or the point of inspiration for Petriglia.

Welcoming the attendees that night were Gabriele Boschi, CEO of Brand Gateway, exclusive distributor of Piquadro in the Philippines, along with his wife, Julie, as well as Marta Mischiatti, Piquadro export area manager, who flew in for the occasion.

The eight collections on display were Aurea, Algoritmo, Tetraktys, Diade, Pulse, Vespucci, Euclide, Cartesio and Ipazia. Check them out at Piquadro boutique at SM Aura.