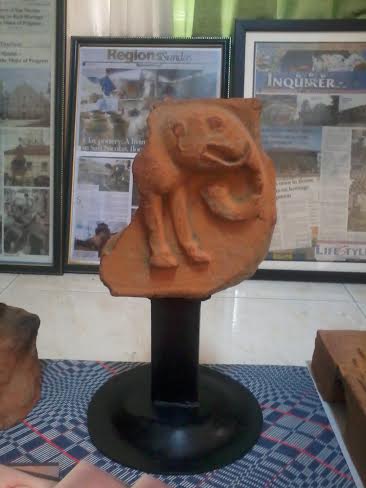 ONE of the first brick pieces recovered

ARCHAEOLOGISTS from the National Museum have recently unearthed more discoveries at the village of Nagrebcan in San Nicolas town, Ilocos Norte.

Artifacts believed to be from the Spanish-colonial period were unearthed during their excavations last April and May. They included relief images of the town’s patron saint, San Nicolas de Tolentino.

The archaeological excavations were conducted through the request of the local government to shed light on the lingering mystery of Nagrebcan.

On January, Inquirer ran the story on the initial finds resulting from the cultural heritage mapping project last year initiated by the local government with the University of Santo Tomas Graduate School-Center for Conservation of Cultural Property and Environment in the Tropics.

Among those retrieved are earthenware pottery shards and fragments of bricks with human and animal figures, said Taj Manahan, archaeologist of the National Museum and head of the excavation project.

“The site is most likely around the late 19th century,” he said. “We need to verify this further by more archaeological investigations.”

The wall-like ruins, which were first believed to be the remnants of an old church, might be something else, explained Manahan, adding that it could be a pavement going to nearby Padsan River.

Manahan said they did archaeological investigations at an adjacent site and found more brick fragments with human and animal figures.

“There is a possibility that the area might be a brick-making site and that the mound [the nearby site] was the rejected pieces of bricks, bricks that had crumbled due to poor firing,” he said.

Given that Nagrebcan, also referred to by the locals as daan nga ili or old town, is a brick manufacturing center until now, Manahan said the areas they investigated might be the old sites of ceramic industries.

“There is a possibility that ceramic industries in Nagrebcan, San Nicolas, were situated beside Padsan River, and that they sold their products there as well,” he explained.

“We know that rivers were the major highways in the past, and there was much convenience back then to travel from one place to another through boats. That’s why most of the old towns were established near the rivers,” Manahan added.

In San Nicolas, he said, the people might have utilized the river pathways to sell their earthenware products.

Manahan said they would conduct more archaeological investigations to validate their hypotheses.

“We’re currently conducting material analyses of the artifacts recovered from the excavations,” he said.

“Hopefully the National Museum team would be able to return to study the area, and, of course, to help the community understand appreciate the value of their cultural heritage.”

Municipal tourism officer Richie Cavinta said the National Museum team also conducted site visits in a number of heritage sites and structures in the town, including a plateau in Barangay Bugnay where the team found Chinese ceramic shards.

Artifacts recovered in Nagrebcan will be part of a museum that will be put up by the local government with the help of the National Museum, said Cavinta.

“We are waiting for the final word from the National Museum about their findings as well as their recommendations [before proceeding with the museum],” said Mayor Melanie Grace Valdez.

“However, we are slowly accumulating artifacts and things we would like to put there,” she added.

Historical records and accounts indicate Nagrebcan as either the old site of the town of Sarrat before it was transferred to the other side of Padsan River, or the site where the people of Sarrat fled after the insurrection of 1815.

The Ilocano word “nagrebcan” also has two interpretations. The first, meaning a “place of ruins” or “destroyed,” and the other, from the word “nagrebaan,” which means “boundary.”