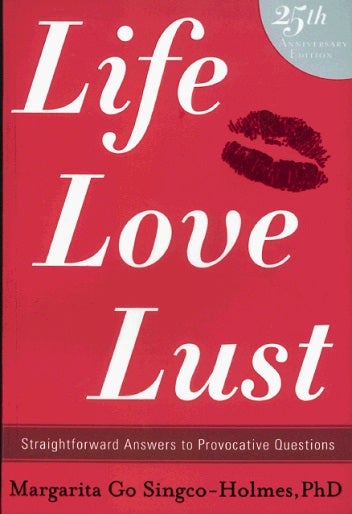 THE COVER of the 25th anniversary edition of "Life, Love, Lust"

1) They can easily ask the most salacious question on the Internet and get instantaneous replies from global sources in varying degrees of frankness and intemperance, and

2) When they might already have read the original publication?

So is this recent release worth your time? Do we even need this collection of “straightforward answers to provocative questions” when there are now apps for casual sex that even your kid brother can access on his smart phone? Is there anything new to discover in the latest edition of Dr. Margarita Go Singco Holmes’ very first book?

The answer to all three questions—yes, yes and yes!—might sound like the most welcome response to people out for sexual fulfillment, but it also seals the reputation of Holmes not only “a repository of (dark) secrets” as Dr. Lourdes Vera Lapuz describes her in the foreword, but as a clinical psychologist who anchors insights borne of expertise with street smarts and humor.

Despite vocal objections and threats of fire, brimstone and lawsuits from so-called guardians of morality, the original “Life, Love and Lust” paved the way 25 years ago for a candid but informed discussion of what may be a topic foremost in people’s mind. This latest edition still does that, but also deftly incorporates the changes—in science, technology and mindset—that have come to pass and affected public attitudes and private practices on sex since then.

For instance, in response to a letter that had a father lamenting the sudden personality change in his son once the boy reached adolescence, Holmes cites not just the psychological “stress and storm” and confusion that hormones and sudden physical changes bring about. She also patiently and painstakingly explains how transient this frightening stage is, and how necessary.

In an updated reply to the same letter 25 years later, Holmes discusses as well how much difference neuroscience has brought into the field of therapy. Beyond culture and upbringing, neuroscientific research has tracked the growth of the brain and its effect on behavior, she notes.

Her advice reassures parents that their adolescents are acting up “not because of poor parenting skills… but that because of all the changes his brain is undergoing, he may not be voted Mr. Congeniality anytime soon.”

For a father worried that his 16-year-old son is gay because he had refused to sleep with the prettiest girl he picked as his birthday present, Holmes offers alternative explanations.

“For one, it is not easy to make love to a woman, especially if it is your very first time, and you know your father is waiting downstairs to hear all the gory details afterward,” she writes.

“A loftier explanation is that your son prefers his first sexual experience to be with someone he cares for and, he is reasonably sure, cares for him too. While it can be very exciting to just sit back and do nothing while a nubile young woman takes off her clothes and promises all sorts of exotic delights, there are some men who like women to be their equals and find it offensive to treat them merely as sex objects,” she adds.

Further on, after explaining that homosexuality is not a sickness that needs a cure, Holmes counsels: “You must remember that your son is still an adolescent. Even if he likes women,.. it is very frightening for one so young to know that he has to have sex with the very first (woman) he is alone in the room with. It is not only your son who feels this way; many adolescents do. That’s why you often see them in groups…”

Letter-writers also get a bonus response. Holmes empathetic and expansive probing of emotional and psychological subtexts are complemented by the reasoned, often bare-bones analysis of facts, context and possible consequences offered by a male perspective—in this case, Jeremy Baer. The author describes her partner of many years as “a columnist, author, retired banker, astute and intelligent,” much of which comes across in his well-thought out replies.

Case in point: In response to a solo parent agonizing whether to tell her two-year-old the truth when she starts asking about her father, an irresponsible married man, or to weave a lie that he’s dead, Baer counsels: “…Although the truth will limit your ability to cast yourself in the best possible light, it will free you to tell her everything about who she is: The product of what was hopefully a happy if brief and ultimately ill-fated relationship between two people who made her what she is.”

He adds: In reality, you will be telling her who her parents were then, their history together, and who they are now… Time is on your side though. What you tell her has to be age-

appropriate so the story will be revealed slowly over a number of years. This means that you can prepare yourself and plan how best to tell her what she needs and wants to know.”

Holmes’ feminist bent also sees through the rose-colored glasses that some women desperate for happy endings hold on to. While she remains supportive of the letter-writer, her no-nonsense counsel also slaps away their tightly-held illusions.

To a 35-year-old virgin eager to meet her online boyfriend of eight years (who never has enough money to come over and meet her), Holmes zeroes in on how the guy had asked the woman not to go to his country should her parents disapprove.

It is frightening, Holmes points out, that he would ask you, at 35, to obey your parents simply because that’s what children do.

“Someone as conservative as him will expect you to obey him simply because wives obey their husbands,” she tells her.

What if she misses her chance at love?

Holmes replies: “Look, I won’t lie to you. Admittedly, it is more difficult to find a good man at 35 than at 27, but love is possible at any age…”

Then comes what may be a heartbreaker to the letter-writer, but a necessary dose of eye-opening reality: “Is there any possibility that he is making you so sabik (eager) that you’d sign anything—joint bank accounts with either of you as signatories, anything you owned transferred to conjugal ownership, etc. just to be married?”

And knowing Holmes and how she never shies away from controversy and graphic language, readers are forewarned: the Net notwithstanding, this book can still teach you stuff you didn’t know, or thought you’d never want to know about.