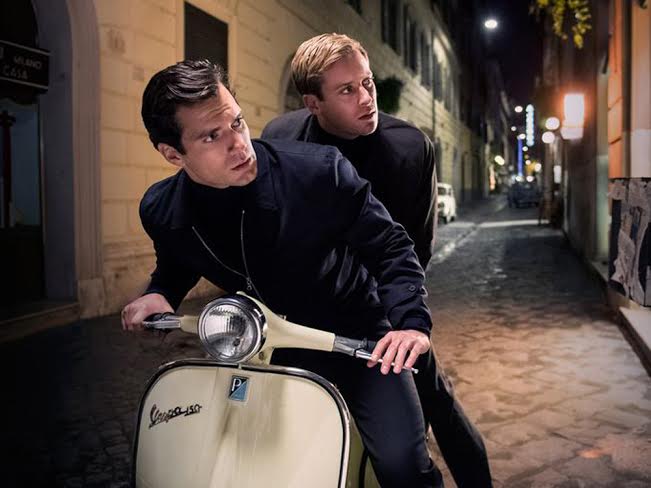 AT THE HEIGHT of the Cold War, CIA agent Napoleon Solo (Henry Cavill) and KGB agent Illya Kuryakin (Armie Hammer) are forced to put aside longstanding hostilities and team up to stop a mysterious international criminal organization working to proliferate nuclear weapons.

The duo’s only lead is the daughter of a vanished German scientist, who is the key to infiltrating the criminal organization.

Directed by Guy Ritchie, “The Man from U.N.C.L.E.” is a fresh take on the 1964 MGM television series of the same name created by Sam Rolfe. The film also stars Alicia Vikander, Elizabeth Debicki, Jared Harris, and Hugh Grant.

The film opens in 1963, during the time when the United States and the Soviet Union are locked in a tense, high-stakes game of chicken over nuclear arms supremacy, and the wartime research of former Nazi scientists is still at a premium on the not-so-open market. A 12-foot concrete wall divides post-World War II Berlin and it’s here, in its long shadows, that Solo and Kuryakin first size each other up in a breakneck, winner-take-all street chase.

Their prize is Gaby Teller (Vikander), a whip-smart East German auto mechanic, who is also the estranged daughter of Dr. Udo Teller, once Hitler’s favorite rocket scientist. Doc Teller has lately gone missing, launching both world powers into a race to find him before his very specific and very dangerous knowledge is channeled into weaponry that could obliterate whole countries. And Gaby may be the only bait that can flush him out.

For the film, Ritchie opted to retain the original material’s Cold War context, with all its cultural and political touchstones.

“It’s a tip of the hat to the series,” Ritchie said. “We wanted to capture the essence and uniqueness of that time while making it immediately accessible to today’s audiences, and as original, attractive and fresh as possible.” The resulting tenor “is both period and contemporary, which feels like a very natural process to me.”

Ritchie’s “The Man from U.N.C.L.E.” is a fast-moving, action-packed, sexy and stylish international adventure, shot through with humor. Sworn enemies Solo and Kuryakin, who are bent on killing each other, are informed by their respective handlers that they will now be working together on a case.

“What we found so irresistible,” said Ritchie, “was taking these polar-opposite agents and forcing them together so that they start out tryin g to annihilate each other and end up cooperating, but maybe still not entirely trusting each other. The story is largely the evolution of their collaboration. The fact that one represents capitalist America and the other represents communist Russia, and these two super powers have to team up to neutralize a threat with global stakes, is a great premise that you can have a lot of fun with, and that’s really the spine of the story.”

“Kuryakin is the ultimate soldier, always in line and giving his best,” Hammer said. “Then he’s thrust into a position that he hates and there’s nothing he can do about it. This guy he’s working with, this Napoleon Solo, he’s so unorthodox. He doesn’t follow the rules. He doesn’t even seem to know there are rules.”