Is this a nice hotel? Check its stars | Inquirer Lifestyle ❮ ❯ 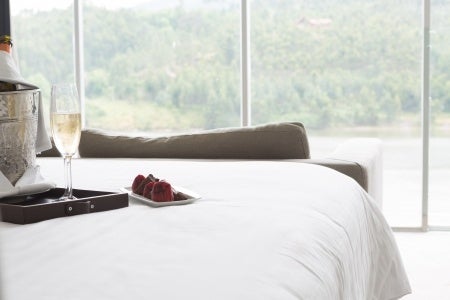 Is this a nice hotel? Check its stars

To ensure that tourists do not lose in translation when it comes to getting the board and lodging they want, the Department of Tourism (DOT) is completing its visits to local hotels and resorts to rate them according to global standards.

From “deluxe,” “first-class,” “standard” and “economy,” the DOT has simplified the classification system for hotels, resorts and apartelles (apartment hotels) into one- to five-star ratings, the internationally recognized and accepted system.

According to Tourism Undersecretary Maria Victoria Jasmin, the process is basically to ensure that accommodation facilities in the country are world-class, where hotels, resorts and apartelles charging 5-star rates truly deliver 5-star service.

With standards that took over three years to draft and another two years to make the rounds of some 2,000 hotels, resorts and apartelles nationwide, the DOT is halfway done altering the previous national classification of deluxe, first-class, standard and economy.

Jasmin pointed out that the star-rating is more global and easier for consumers, both Filipinos and foreigners, to understand. She said the rating system is based “not so much on what the hotel should have but what the consumer should expect.”

According to Jasmin, as of July this year, 729 hotels, resorts and apartelles had been rated although some were still up for validation.

The tourism undersecretary said the development of the rating system started in 2010 when the accreditation of primary tourism enterprises, including accommodation facilities, travel and tour agencies, tour guides, and tourist transport was made mandatory.

“We took the opportunity to review our rules and regulations… The first thing we thought of was we needed to upgrade our standards for accommodation facilities,” she told the Inquirer, adding that they primarily settled on the need to set the minimum requirements for hotels, resorts and apartelles.

“When we met this guy (GIZ consultant) we said, ‘This is the guy that we need because he set up the standards in New Zealand and we can consult him with regard to our minimum standards,’” she revealed, adding that without minimum standards, any hotel can claim to be five-star without meeting international norms.

The final draft for the minimum requirements was finished in 2013 after a review of the classifications used in other countries.

At the same time the star-rating project was rolled out, the Asian Development Bank began its Philippines Improving Competitiveness in Tourism or PICTourism project. The ADB tapped international assessors to do the actual audit of hotels, resorts and apartelles nationwide.

Those who rate the hotels, resorts and apartelles check into the accommodation facilities as regular guests, going undercover. “But after the audit they identify themselves so their findings will not be questioned. It (the results) is objective in a sense,” she said.

A star-rating is the result of an assessors’ observation of services, as well as maintenance of buildings, public areas, restaurants, bedrooms and bathrooms.

While some hotels, resorts and apartelles that had been rated disagree with the assessors’ findings, “we are here to determine the classification of the accommodation facilities because the objective is to be transparent, as much as possible, to be factual with the end of making the consumer aware of the type of facility he is using,” Jasmin said.

She explained that although reviews on social websites may be helpful guides for travelers, it is much better to have an official, objective, trustworthy and internationally understood accreditation system from the government that the people can rely on.