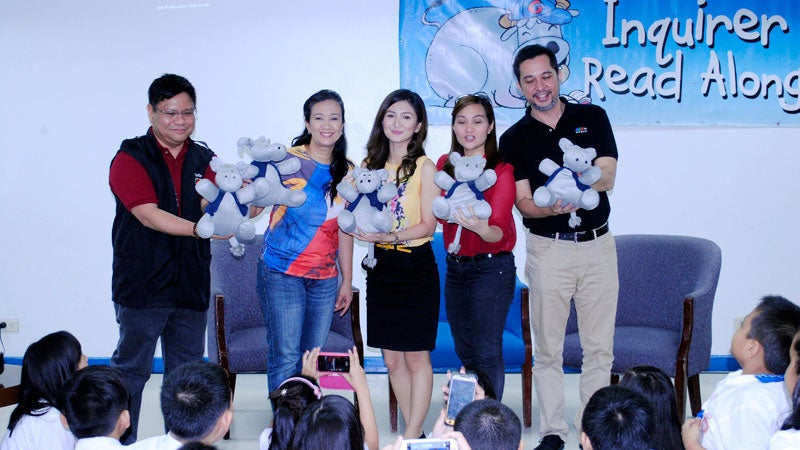 An interactive storytelling in Filipino marked the Inquirer Read-Along’s celebration of “Buwan ng Wika,” or National Language Month, with actors and members of the censors board as readers.

“Closest to our hearts should be our national language,” said Movie and Television Review and Classification Board (MTRCB) chair Toto Villareal, who stressed the importance of reading to children in Filipino during the session at the Inquirer main office in Makati.

The stories were about unity, teamwork and the determination to exceed expectations.

Halili read “Ang Patsotsay na Iisa ang Pakpak,” an Aklat Batibot written by Rene Villanueva, about flying creatures called Patsotsays and how some of those born with only one wing managed to fly higher by linking hands and flapping their wings together.

“The protagonist of the story we read was a painter who helped give color to a dull town. I think the children were able to learn they can also inspire and be agents for social change. If they work together, if they are open to change, if they are willing to help others, they can inspire unity in the community,” Villareal said.

Reyes, who is also an actress and TV host, said she reads to her own kids in Filipino and makes sure they can speak and understand the native tongue.

Andrews stressed the need to “protect and nurture our national language because it is ours.”

“Given the right environment, you can really see the interaction with kids. I was very surprised how attentive all the kids were,” Andrews said of the more than 50 children from Mandaluyong Elementary School, Chair of St. Peter School and School of St. Anthony.

Reyes found the storytelling “very informative” for the kids too because the stories have moral lessons. “I saw that they were really eager to participate and they listened attentively.”

“I hope the children learned the importance of helping each other through the story that I read. The story highlighted that if we help each other, despite the handicaps we may have, we can reach our common goal,” she said.

Reyes said she hoped for more activities like Read-Along to “encourage kids to love reading more.”

The MTRCB recognizes the importance of intellectual conversations for experiential education. In its campaign to create a population of intelligent viewers, the MTRCB will launch the second season of its program “MTRCB Uncut” on Aug. 23 on Net25. The show, which aims to bring media literacy and awareness about film and television ratings to more people, airs Sundays at 7 p.m.

Joseph Palconit, a teacher from Mandaluyong Elementary School, found merit in all the stories because they had moral lessons.

“The children learned a lot. The first lesson was about valuing our nationality and our flag. The second one told us to exert efforts in cleaning up our environment. The third one instructed the children not to give up on all their intentions and dreams,” he said.

Eleven-year-old Wrya, from Chair of St. Peter School, found “Ang Patsotsay” “beautiful” and was her favorite because she learned important values from it.

Lorenzo, 11, from Mandaluyong Elementary School, enjoyed the story alternately read by Reyes, Andrews and Villareal. “We have to clean up our surroundings regularly to make them, and us, more beautiful,” he said.