For whom the robot's bell tolls | Inquirer Lifestyle ❮ ❯ 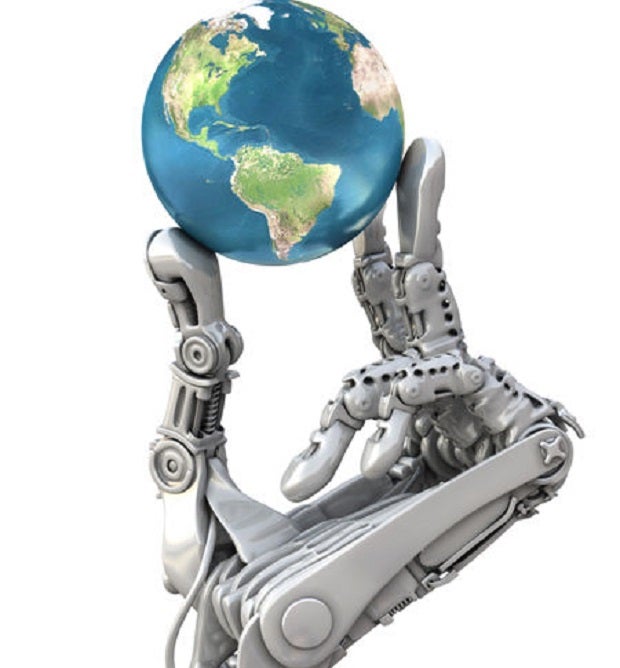 China has been the world's largest robot market since 2013, and within a year or so will have more robots than any other country, Ford says. China Daily/ANN

For whom the robot’s bell tolls

Author’s bleak warning suggests a world where many of us are idle.

If you think you are safe from the invading army of robots just because you are highly skilled, and that it is unskilled workers whom these mechanical soldiers will kill, you had better put your thinking cap and helmet back on.

As technology advances rapidly, robots are replacing more people in various jobs, not only low-skilled ones such as putting in screws or cleaning floors, but higher-skilled ones such as driving cars, says Martin Ford in his book Rise of the Robots: Technology and the Threat of Jobless Future, a Chinese translation of which was published last month.

In fact, someday robots may be so smart that most of us are out of work, Ford says. Having no income, humans will not be able to survive in a market economy, where robots will produce goods in huge quantities but that will have few buyers.

Education and hard work will be no guarantee of finding employment, and the social and economic consequences will be far-reaching, he says.

Some would argue that in the previous two industrial revolutions, people also worried about losing jobs as machines became more capable, he says, but in fact more jobs were created.

“But this time things are different. Robots are replacing human laborers to do not only muscle work but also brain work.”

Ford says machines now take cognitive tests and make decisions. They not only solve problems but can also seamlessly and flawlessly learn lessons based on data and experience.

“Ask yourself a question: Could another smart person, if he or she has a detailed record of what you’ve done with your job, study the record and learn to do your job?

“If you look at everybody in the economy, a huge number of jobs are in that category. Someone can learn to do your job by knowing what you’ve done in the past.”

In his introduction to the book, Ford quotes a Washington Post report in 2010 that said that in the first decade of the new century no new jobs were created in the United States.

“This is a long-term structural issue. Fewer jobs will be created in the future, but robots are getting increasingly smart enough to do more people’s jobs.

“As a matter of fact, about 90 percent of people in the US are working in an occupation that was created 100 years ago. A huge number of people will lose their jobs once self-driving cars are put in wide use.”

Ford has had a small software business in Silicon Valley, California, since 1997. He says that over the ensuing 18 years he has seen huge changes to his business.

In 1997, when Microsoft was already huge but was still growing, Ford’s company created software for the Windows operating system. When the company was founded, he says, there were people doing routine jobs such as packing and sending out CD-ROMs. In a few years those low-skilled jobs disappeared—as did CD-ROMs.

He then began writing his first book, The Lights in the Tunnel: Automation, Accelerating Technology and the Economy of the Future, which was self-published in 2009. In the book he envisaged how people will lose their jobs in the future.

However, Ford says that even he did not expect technology to advance as quickly as it has, because within six months after the book was published, Google announced that it was developing self-driving cars.

“Now there are many companies working on it, so is (the taxi-hailing app developer) Uber. It’s really becoming a huge thing very rapidly.”

Six years have passed since the first book came out, and Ford cites numerous examples and a mass of academic data in the new book, most of it emanating from the US, to show how technology affects the job market.

Although the robot head count in China is low as a proportion of the number of workers, particularly compared with countries such as Japan and South Korea, the trend is for more and more Chinese workers to lose their jobs to robots, he says.

“China is only getting started and still has a long way to go. … So I think it can be highly disruptive. It will go on for a long time. It’s not something like you install robots for the next year and you then just stop. The number of robots you have just gets bigger and bigger.”

Some Americans applaud the use of robots, predicting that since investors will use more of them to replace workers to reduce overheads, more factory jobs will return to the US from China, as happened in the textile industry, Ford says.

“But there are still no jobs for people.”

In some industries such as electronics, where the whole supply chain is now in China, it is extremely difficult for US manufacturers to repatriate jobs, he says.

If the day really comes when most people lose their jobs, what exactly are they going to do, then?

“One possible solution is for governments to give people a guaranteed income for survival, based on which they can choose to do other jobs such as research, or starting their own business to get rich. That’s not a communist economy, because people can still purchase whatever they want in a market-oriented economy.”