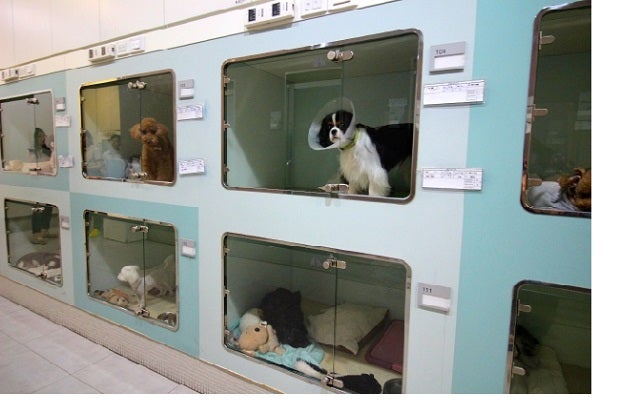 Pets stay at a hotel service offered by Irion, an animal hospital in southern Seoul. The Korea Herald/ANN

Pets stay at a hotel service offered by Irion, an animal hospital in southern Seoul. The Korea Herald/ANN

Planning a three-day family vacation at a local resort last summer, serviceman Choi Woo-young was concerned about whether he could take his 15-year-old poodle Rookie on the trip.

“I was worried that other guests would not like having Rookie around them, and I wasn’t sure if the resort would allow any pets on the premises either,” said Choi.

Going ahead with the trip after much contemplation, the 24-year-old decided to place Rookie at a pet hospital offering “hotel services.” From feeding to keeping it healthy, the hospital provided full-day care for 40,000 won a day.

Rookie’s three-day stay at the hotel was decent—he was bathed, fed and groomed along with other pets awaiting their owners’ return.

While his cubicle-like corner at the hospital may have been tight and his walks restricted, Rookie’s summer vacation was by far a paradise compared to the increasing number of unlucky pets abandoned by their owners en route to their carefree vacation.

As the number of households with pets rises, more pet shops and hospitals in Korea are offering the hotel service in a bid to attract more customers especially in the summer vacation season.
But with the rise in the total number of pets, the number of abandoned or missing pets has also spiked. An average of 81,000 animals go homeless every year, according to the Ministry of Agriculture, Food and Rural Affairs, which is in charge of the country’s animal health. It said the number particularly hikes in the summer. The polarized fate of the pets is evident in the flourishing pet hotel service businesses in Seoul.

The polarized fate of the pets is evident in the flourishing pet hotel service businesses in Seoul.

World Pet Animal Hospital in western Seoul saw a full booking for this summer’s hotel service a month ahead of time.

“Our summer reservations are fully booked. Reservations for Chuseok in September are also already half filled,” said a hospital official.

Irion, a pet hospital in southern Seoul, was also fully booked for the summer.

The cost ranges from 40,000 won to 120,000 won ($34-$102) per day depending on the type of services, ranging from grooming and health checkups to Web-monitoring. The most expensive hotel service allows owners to monitor their pets through Web cameras round-the-clock. The owners can also receive a daily report of their pets via text message from the hospital.

Even among the similar businesses, hospitals are more favored than pet shops, as the doting owners choose safety over cost.

In sharp contrast, about 8,300 animals were found abandoned across the country last month, according to the ministry. This is 23.4 percent higher than the monthly average number of about 6,700. Throughout this year, about 46,000 animals were cast off.

The “summer surge” was also witnessed last year as about 8,900 were abandoned last July, 28.4 percent higher than the monthly average for the year.

“As most accommodations ban pets, many owners, who presumably regarded their pets as a burden, abandon them right before they leave for the trip,” said Park So-youn, president of animal rights group Coexistence of Animal Rights on Earth.

“There are also those who are brought along on the trip but end up getting lost,” she added.

As part of the efforts to prevent animals from being abandoned or going missing, the government made dog registration mandatory from 2013.

There are three types of animal registration allowed: a radio-frequency identification chip, an electronic tag leash or an ordinary tag around the pet’s neck with the registration number. The cost is 15,000 won on average.

As of last month, however, only about 58 percent of 1.6 million dogs have been registered.

The voluntary nature of the measures, including recommendation that all pets wear a leash at all times, has failed to improve the rising abandonment rate, activists say.

“The punishment when caught for violation is so light. The toughest penalty for not registering the pet is only a fine of 400,000 won,” Park said.

In a bid to prevent the pets from going astray, some municipalities have started to clamp down on those who let their dogs roam without a leash at local tourist spots such as Haeundae Beach in Busan during the holiday seasons.

The agriculture ministry also vowed earlier this month to unify the registration requirement to have the RFID chip inserted in all dogs starting next year.

More controversy, however, is expected of the government’s plans, as pet owners express unease over the potential danger of the embedded RFID. Some expressed concerns that inserting microchips in the animals’ necks may cause side effects such as cancer or dermatitis.

“How can the government be so sure of the chip’s safety? You never know what’s going to happen to the pet. I wouldn’t want my pet to have an artificial chip in its body,” said banker Lee Won-joo, who raises a 5-year-old Chihuahua.

But animal rights groups noted that such measures are inevitable to curb animal abandonment.

“Pets going missing or being abandoned cannot be controlled unless inserting the microchip is made absolutely mandatory. Although safety concerns are understandable, the government should coincidentally work on persuading the public with enough data and study results to calm such worries,” said Jo Hee-kyung, the president of Korean Animal Welfare Association.

“This is part of an attempt to boost pet owner’s responsibility. Raising pets is not merely about adoring the animals. It’s a matter of accountability,” she added.