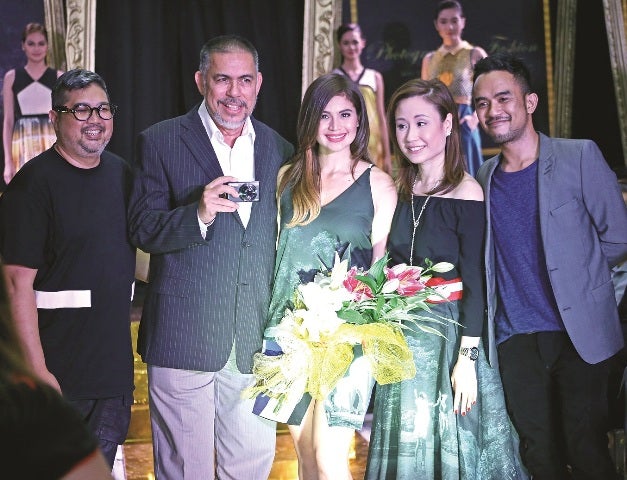 For Plains & Prints’ latest collection marking its 20th year as a ready-to-wear brand, it collaborated with two of the country’s top fashion photographers.

Their partnership went beyond billboards and marketing collaterals, which feature celebrity endorser Anne Curtis. Wig Tysmans and Mark Nicdao’s personal photos ended up being reproduced and splashed on two sets of dresses and separates designed by Rhett Eala.

The two also shared with media their views on fashion photography and the demands of a competitive profession catering to an increasingly jaded public.

“Almost every image we see now in fashion photography is an improvement of an image we’ve already seen before,” said Tysmans. “Although it’s instinctive for young photographers to recreate images others have done in the past, they should avoid doing this.”

It’s okay to be inspired by a great photographer’s works, but young upstarts should just get “bits and pieces” of inspiration from them, he said. “They should be creative enough to show something a little bit different.”

Since he started his career almost 40 years ago as a photojournalist before shifting to documentary photography, Tysmans considers himself a “people” photographer.

“I was always attracted to the face,” he said. “I was interested in getting to know people personally. Eventually, my skill in taking portraits was developed.”

When he was a newbie photographer, Tysmans and his family lived for a time in Baguio. He was prevailed upon by Plains & Prints to share his black and white images of a more pristine city, including snapshots of his then young children enjoying Sunday walks on Burnham Park.

“I have fond memories of Baguio,” said Tysmans. “All my children were born there. The city was so much different back then.”

He did plenty of advertising work in Baguio, but his income as a photographer wasn’t enough. When his children were about to enter college, he and his family decided to relocate to Manila some time in the ’80s.

It was during this time that Tysmans became a full-time fashion photographer.

His training as a photojournalist and documentarian came in handy. Since fashion photography is still all about “people with beautiful clothes on,” he didn’t find the transition difficult.

There were no glossies back then. Not only was the medium for fashion photography limited, but Tysmans and his fellow freelancers had to compete with colleagues like Jun de Leon, who were employed by the few established newspapers.

“To get noticed, I had to show people that I had something new and different to offer,” he said. “Thank God, the designers who started hiring my services back then were on top.”

Good fashion photography shouldn’t be about the person, Tysmans added. Except for shoots involving celebrities, it should still be about the clothes. A photographer should be able to bring out the best in an outfit.

“I have yet to shoot Anne (Curtis) for a campaign,” he said. “It’s Mark who shoots her. But when a brand hires someone as famous as her, her face is already a factor in marketing the clothes. Otherwise, focus should still be on the clothes.”

Before becoming a professional photographer, the only training Nicdao had was a semester of photography class in college. Back then he didn’t consider something as “subjective” as photography an art form. He was more into painting.

“It didn’t interest me initially because I was more afraid of breaking an expensive camera than anything,” he said. “I wasn’t even an assistant photographer. I was just an assistant.”

But as demand for their services continued to spike, Abraham needed someone to help him shoot pictures. He must have seen something in the young Nicdao that convinced him of his potential.

Nicdao soon gave in to his boss’ insistence. When he saw initial results of his work, it not only pleased him and other people. To his surprise, he soon began to enjoy doing it.

Soon after becoming a full-time photographer in 2003, he met Ben Chan and Lucy Torres. Before he knew it, he was shooting his first ever billboard.

There should be a “good balance” between the photographer’s need for self-expression and the client’s objective to sell clothes, he said.

“The bottom line is, the clothes must show. A photographer’s artistic side comes in later, based on the emotions his images evoke from the viewer.”

And now that everyone with a digital camera or even a smart phone can call himself a photographer, Nicdao is “going back to basics” by mastering conventional film.

Like Tysmans, Nicdao has had his share of dealing with huge egos. But every celeb he has worked with is generally pleasant except for this “disrespectful girl” whom he refused to identify.

“I was trying to give instructions, and she kept saying she couldn’t hear me,” said Nicdao. “I knew she could. I was still able to do the job, but instead of spending an hour or two perfecting the shoot, I did it in 15 minutes. I’m not working with her anymore.”

Nicdao always finds a way to salvage a fashion shoot and even make it “fun.” And that doesn’t involve throwing a camera at a wayward subject.

“I don’t know if I’m capable of doing that,” said the smiling-faced Nicdao. “It’s too expensive.”