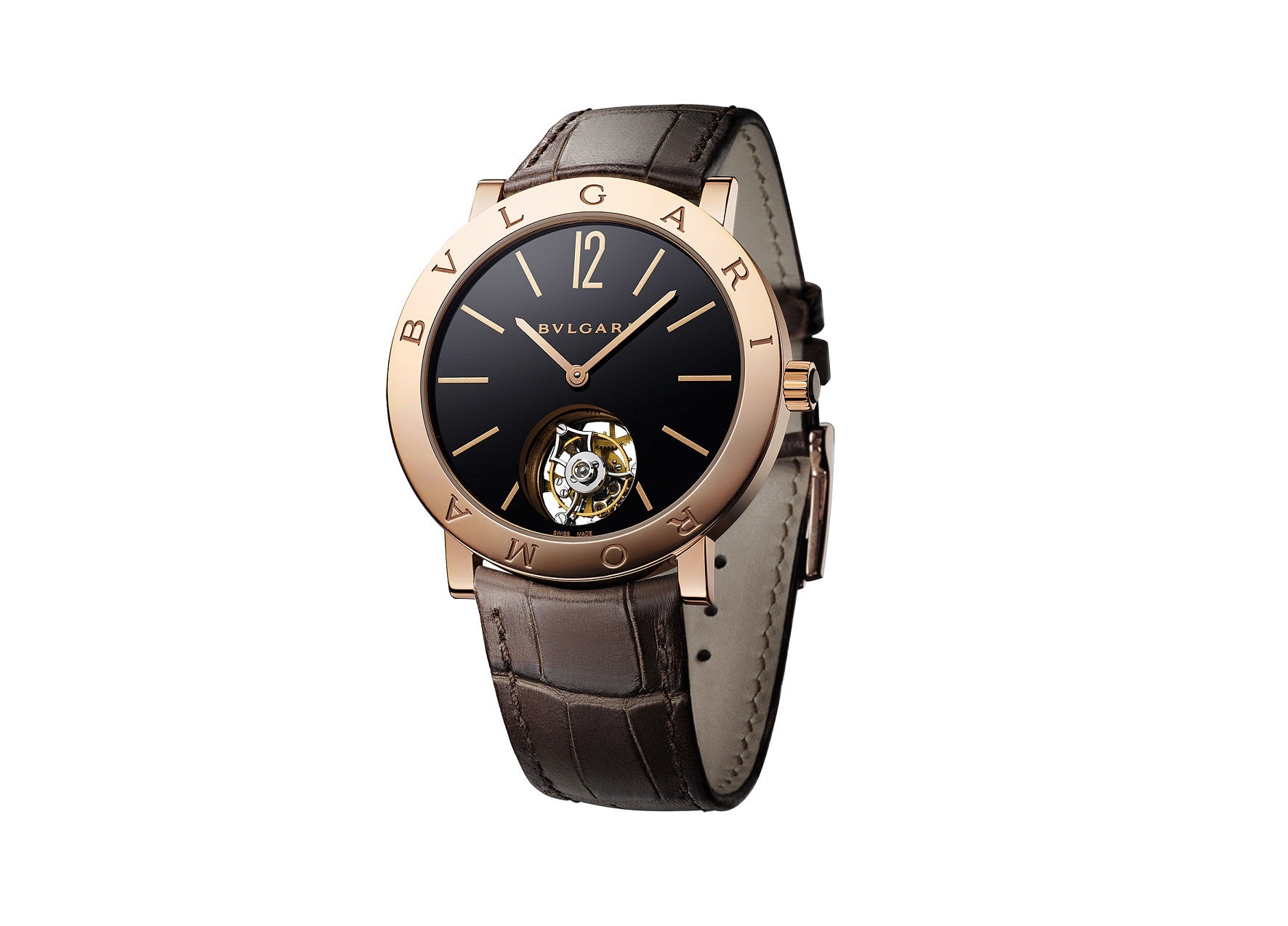 BULGARI Finissimo line stirs up the region Tourbillon has small revolving carriage housing the escapement, and the balance wheel is designed to release the movement from the grip of gravity.

A most impressive collection of complicated watches, the likes of which the region perhaps hadn’t seen in a while, was displayed by Bulgari in Singapore last April. Some of these will be at Bulgari Manila before the end of year.

The line was aptly called Complicated Watch collection for men and and to-lust-for watches for women—both in limited editions. They were the highlight of the Bulgari High Jewellery event held at the Bulgari store at Marina Bay Sands, and later in the day at St. Regis Singapore, where a fine dinner followed a cinematic theme—a throwback to Bulgari’s heritage, shaped in part by cinema.

The celebrity-studded evening party was called Cinecittà, after the Roman movie studio that produced the blockbusters of the ’50s and the ’60s, such as “La Dolce Vita” and “Cleopatra,” the drop-dead glamour days of the movie goddesses Gina Lollobrigida, Anna Magnani, Sophia Loren, and of course, Elizabeth Taylor, whose staple wear in their memorable appearances was Bulgari.

The formal dinner showcased the four-course menu of Chef Luca Fantin, the Michelin-star executive chef of Bulgari’s Ginza Tower restaurant. Fantin flew in from Tokyo for the event. His cuisine was an interesting fusion of the culinary traits of the Japanese and the Italian—the Japanese for its dependence on the freshest ingredients (Fantin loves the Tsukiji market) and the Italian, for the alluring interlocking of flavors.

Aside from the jewelry, the stars of the day were the Complicated Watches.

There was the Bulgari Roma Finissimo Tourbillon, an ingenious combination of two of the most delicate watchmaking complications: extreme finesse and the Tourbillon.

The description is rather technical, but no less interesting: “It has a small revolving carriage housing the escapement and balance wheel that is designed to release the movement from the grip of gravity by counter-balancing its resulting disturbances and enhancing the isochronism of the balance wheel. It is a means of achieving the most accurate possible mechanical movements.

“The Finissimo Tourbillon BVL 268 movement is just 1.95mm thick, an absolute world record for a flying tourbillon without a bridge. This mechanical hand-wound movement, decorated with the greatest delicacy according to the ancestral techniques of circular graining and Côtes de Genève, has a 52-hour power reserve. It beats at the rate of 21,600 vibrations per hour (3 Hz).

“The pink gold case is barely 5.40mm thick with a 41 mm diameter. The bezel can be set with 44 brilliant-cut diamonds totalling approximately 2.5 carats. The pink gold crown has a black ceramic insert echoing the magnificent lacquer on the dial and the alligator strap.”

Another is the Carillon Tourbillon, which is slim, legible, with the minute-repeater slide on the left-hand side of the case.

According to its technical notes: “The gongs of the Carillon Tourbillon are delicately fashioned in several successive stages. These entirely hand-crafted special-shaped gongs serve to achieve a perfect and absolutely identical sound quality. They are bent and shaped by hand before being fired again and hardened at a temperature of around 900 degrees.

“They are then carefully cleaned and polished before a second firing in the furnace at a slightly slower temperature. These meticulous operations requiring both patience and mastery result in a metal boasting vibratory qualities that ensure perfect resonance.”

A real show-stopper is the Octo Bi-Retrograde with sparkling baguette-cut gems—paved with 262 baguette-cut diamonds adorning the white gold case.

The construction of the Tourbillon Saphir Ultranero resembles the shape of a drum.

The description: “The movement is built on a sapphire crystal plate and some of its parts—such as the barrel drum and the tourbillon carriage bridge—are skeleton-worked. The latter finish accentuates the effect of transparency and graceful lightness exuded by the Tourbillon Saphir Ultranero.”

There are men who are watch connoisseurs who master the intricacies and complexities of the mechanism. That’s on one hand.

The women, on another hand, appreciate the brilliance of the gems and the cutting-edge design.

What caught our eye was the—swan.

Bulgari has a way of luring both species, and it has done so through the decades.