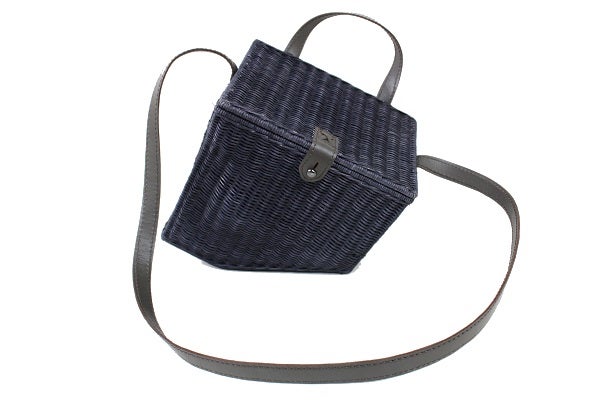 Zacarias “Cube” inspired by a mountain lodge in Slovakia

I’ve come to look forward to boutique owner Mavis Fuentabella’s periodic pop-ups at her store Tala Manila, which is nestled in Salcedo Village, simply because it’s the place to look if you want something truly original.

The first pop-up I attended was for chic handbag brand Tali Handmade, which are hand-woven by female inmates at the Manila City Jail. Her next pop-ups hosted Borgy Manotoc and Japanese designer Takashi Uokawa’s collaborative clothing line, Cavelaborem, and Japanese bespoke eyewear brand, Nackymade, which counts Yoko Ono as a client.

Simply put, Mavis has a knack for gathering designers who reflect her own personal style: subtle, relaxed and comfortable—with an element of surprise thrown in the mix. Her latest pop-up was no exception, featuring two local brands that are known for their thoughtful, and often offbeat sensibilities.

Zacarias is a line of bags that are handwoven in creative director Rita Nazareno’s family workshop, S.C. Vizcarra, which is located along Roxas Boulevard. Her current collection is a mix of design influences.

“I reference contemporary art, architecture, design and cinema,” said Nazareno. “The weavers and I get to explore the works of artists like Julie Mehretu and Isa Genzken, which is pretty awesome”—and pop culture references.”

“The Galaxy collection with the Dark Helmet bag (an abstract Darth Vader) is my favorite right now,” she added. “Our clients in Europe loved it. It is for the (glam) geek in some of us.”

The line, though available in Italy, Monaco, Spain, France and Japan, previously did not have an outlet in Manila, apart from the workshop.

“I have known Mavis since we were classmates in fifth grade,” said Nazareno. “We got back in touch again and what she has at Tala Manila is outstanding-discreet, distinct, impeccable designs.”

Which brings us to the other featured label in the pop-up: Dotcomme.

Started by friends Patrice Ramos-Diaz, Cecile van Straten and Penny Ong, the line is a playful, “anti-sexy” and “anti-fit” set of basics.

“Dotcomme is for that person who still can’t find anything to wear despite all the brands opening in Manila,” said Van Straten. “She is not easy to please and doesn’t mind wearing a uniform of neutral colors. She dresses more like a boy than a girly girl.”

“Each of us have a background in fashion, so it was natural for us to have conceptualized a line of affordable clothes that expressed this style,” said Diaz. “I guess we also felt we could, in our own little way, have an influence on local fashion.

“More importantly, we wanted to do it for fun. It was an excuse to spend more time with each other.”

Diaz expressed sadness that Ong had passed away last June, “and we figured she would want us to continue on with it as planned.”

Zacarias and Dotcomme share a similar aesthetic, so that Fuentabella featured them in a single pop-up event.

If there’s one thing that ties all four women together, it’s that each has a distinctive style, assertive personality and definite taste. Whether you’ve nailed your own sartorial preferences or are still in the exploratory stage, it wouldn’t hurt to stop by and check out their wares. If anything, what you find may lead you in the right direction.