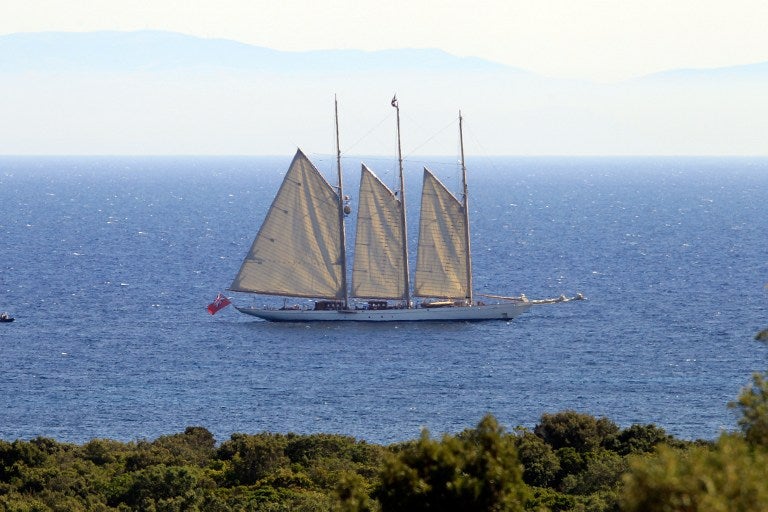 The yacht Adix, owned by Spanish Santander banking group and flying a British flag, sails off Testa beach on August 4, 2015, in Pianottoli Caldarello, Corsica, four days after French customs seized a Picasso on board considered a national treasure by Spain. AFP

The United States on Thursday returned to French authorities an oil painting by Pablo Picasso that was reported stolen from a major Paris museum 14 years ago.

“The Hairdresser,” which Picasso created in Paris in 1911 during his Cubism period, was seized by US customs agents in New Jersey.

Valued at $15 million, it was authenticated in January by experts from the Centre Georges Pompidou museum, its previous home.

“Picasso used to say: ‘A painting truly exists in the eyes of the beholder’,” said Frederic Dore, deputy chief of mission at the French embassy in Washington, where the painting was formally handed over.

Once back in the French capital, the diplomat said, it will “come back to life” and return to public view after careful restoration “thanks to this outstanding Franco-American customs cooperation.”

The painting had been listed on Interpol’s database of stolen works of art since it was reported stolen from the Centre Pompidou’s archives in 2001.

It had last been publicly displayed in Munich, Germany in 1998—and no one is clear on where it has been since.

US customs agents came across it during a targeted inspection in Newark, New Jersey, just outside New York, in December 2014.

Wrapped as a Christmas parcel sent from Belgium, it bore a shipping label that claimed it was a mere $30 handicraft, the US Immigration and Customs Enforcement (ICE) agency said.

No arrests have been made.

“It’s truly priceless (and) so meaningful—not just to your country, but to the world,” said ICE director Sarah Saldana at the handover ceremony.

“We are committed to extracting stolen cultural property from the grasp of the black market and restoring it to its rightful owners,” added Kelly Currie, the US federal prosecutor for the eastern district of New York, in a statement.

“The Hairdresser” entered the Centre Pompidou’s collection in 1967, donated by French art collector Georges Salles, who specialized in Cubist works.

It had previously belonged to French art dealer Ambroise Vollard, who played a major role in promoting Picasso and other early 20th century artists.

Dore said it was the fourth piece of art that the US authorities have returned to France since 2011.

Another Picasso worth over 25 million euros ($27.9 million), seized from a yacht off the French island of Corsica, was transferred Tuesday to a Madrid museum.

That 1906 painting entitled “Head of a Young Woman,” which was subject to a Spanish export ban, had been seized by French customs at the end of July.

Picasso died in France in 1973 at the age of 91, leaving behind a vast and influential body of work including paintings, sculptures and ceramics.