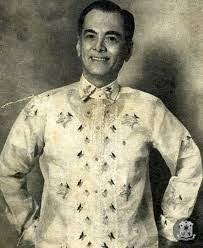 The bon vivant Manuel L. Quezon was the first Philippine president to wear the “barong Tagalog.”

Manuel L. Quezon is the subject of a new musical

Manuel L. Quezon, who later became the first President of the Philippine Commonwealth, was a playboy who frequented the Santa Ana cabaret in Manila, and was a real bon vivant. He was an avid poker player who also saved some 1,200 Jews from the Holocaust by granting them safe refuge in Manila.

But it was his leadership of the Philippines’ struggle for independence during the early decades of the 20th century that assured him his place in history books. He has a much-quoted statement to his name (“I prefer a government run like hell by Filipinos to a government run like heaven by Americans”), but, during World War II, he uttered another deathless line: “How like America to be concerned for the fate of a distant cousin (Europe) while a daughter (the Philippines) is being raped in her backyard.”

Subsequent performances of the musical play, mounted by Full House Productions, will be for free for the high school students of government schools in the city and their teachers and principals.

The musical play is part of the city government’s Diamond Jubilee celebration. It shifts from the past to the present, with three college students (played by Joel Molina, Joshua Deocareza and Analin Bantug) discussing certain events in the life of Quezon, which are then dramatized through scenes and songs.

“Our thrust is interesting,” said De Jesus. “We will show how he became close to the people—his charisma. We want the students to relate to him, in their own language, in the language that they can understand.”

“We made the play more modern and acceptable to the youth,” said City Administrator Aldrin Cuña.

Regina Samson, also of the QC government, added: “The play is very contemporary; it is a fresh take on Quezon.”