Real rain–12,000 liters of it–is a highlight of ‘Singin’ in the Rain’ | Inquirer Lifestyle ❮ ❯ 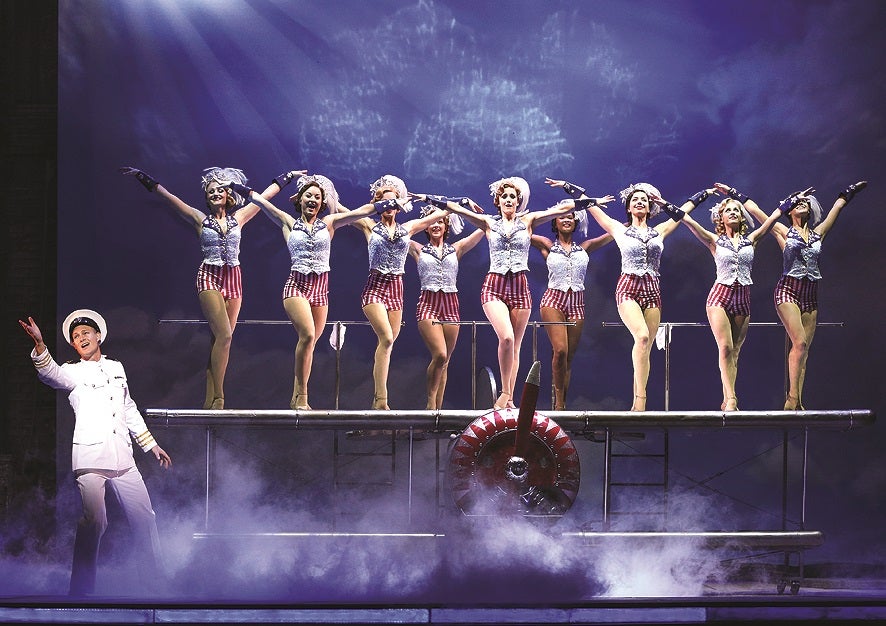 For every performance, 12,000 liters of water drop on stage for a realistic rainstorm. Audience members in the so-called “Splash Zone” (the first three rows up front) are given disposable ponchos..PHOTOS FROM CONCERTUS MANILA/LUNCHBOX THEATRICAL PRODUCTIONS

It’s no helicopter landing or falling chandelier, but the downpour in the musical production “Singin’ in the Rain” has already proven to be just as formidable as any high-tech stage prop.

In the lead-up to its Manila gala night on Aug. 20 at The Theatre at Solaire, the touring company has announced that its original male lead, Grant Almirall, who played Don Lockwood in New Zealand in May (and who performed at a media launch here back in June), will be replaced by alternate Duane Alexander, who also took over the Singapore leg of the tour last July. Almirall broke his foot during rehearsals.

In the Auckland leg of their tour in May, the principal actors, including Almirall and Alexander, talked at length about the challenges of dancing on a wet, slick stage, and the brutal training involved in performing some of the most gruelling choreography ever created for the stage.

For every performance, 12,000 liters of water drop on stage, a realistic rainstorm that floods the floor, creating the setting for that spirited sing-and-dance number re-creating Gene Kelly’s unforgettable scene in the eponymous film.

(Read related story: “This is one downpour Manila will enjoy.”)

“It’s extremely physical, and Don is in a lot of the numbers,” Almirall said in May. “So from a stamina point of view, it has been quite a feat to try to stay fit for this part. It’s been a feat to do the part over and over again to build your stamina. It’s quite demanding on the body. You try not to slip. It has happened a few times and it will probably happen again at some point.”

And sadly it did. So Manila will miss out on Almirall’s disarming take on Don Lockwood, but will instead witness a no less impressive replacement in Alexander, who’s also the company’s dance captain and a veteran of the international stage at age 35.

“The water has to be the right ratio because less water is actually more slippery,” Alexander said. “So you want just enough water to make a lovely big splash for the audience, which they enjoy; if there’s too much water then the actors can’t turn properly. They slip. I fortunately haven’t. Our crew is on top of their game; once it stops raining they’re up with their mops and squeegees and they dry the floorboards and the speakers, in the 10 to 15-minute interval. It’s a very athletic show.”

Don Lockwood is the character popularized by Kelly in the iconic 1952 feel-good film of the same title. Set in 1920s Hollywood, popular actor Don falls in love with a chorus girl named Kathy Selden, played in this production by Bethany Dickson, just as the film industry was shifting to talkies.

Directed by Jonathan Church, the stage version debuted in 2011 at the Chichester Festival Theatre in England before moving to London’s West End. It earned four Olivier Awards nominations, including one for the choreography of Andrew Wright.

“I watched the film growing up,” said Dickson, who has done leads in touring productions of “Grease” and “The Sound of Music.” “But I didn’t watch any other production before working on this because I loved the show so much, I wanted a fresh take on it and work with the director so I’m not trying to be something else.”

The Cape Town native also talked about how she and the other principals—including Steven van Wyk, who plays Don’s sidekick Cosmo Brown—had to undergo a boot camp to prepare for the backbreaking choreography, on top of several weeks of training with the rest of the ensemble in South Africa, before setting out for New Zealand.

“It’s very different from other roles that I have played,” she said. “I’ve done roles that are just singing and acting, and this one’s incredibly physical. I braced myself for the challenging process and went into it with an open attitude, ready to be shaped and molded and try to get myself into the best mindset so the director can get the best product out of me.”

Van Wyk was especially thrilled to bag the Cosmo role, his first major part in a big musical.

Cosmo provides much of the physical humor, the jocose foil to his dashing best friend. Tempting as it may be, van Wyk said he tries hard not to play to the audience’s reactions.

“That’s one of the challenges of my role,” he said. “I could be more and more of a clown. It’s hard to reel that in and keep it a bit more true to what it should be. There’s a level where always, you have to be aware of the audience, and at the same time maintain the integrity of the production to not just go crazy and get the biggest laughs you can get.”

By and large, the musical is faithful to the film, filled with energetic dancing and singing, much so that those who loved the Kelly starrer won’t be disappointed.

“It stands the test of time, this musical. It’s a classic,” Alexander said. “You don’t have to know the movie to enjoy this stage performance. It’s a stand-alone. It pays wonderful tribute to the movie but in itself is wonderful evening entertainment, even if you’ve never heard of the songs. There are so many entertaining things. It’s funny, it’s romantic.”

The actor was not fazed by comparisons to the film.

“People compare all the time,” Alexander said. “People forget that we’re not trying to be Gene Kelly or Debbie Reynolds; we’re trying to be Don Lockwood and Kathy Selden, portraying the role, not the actor. Bethany recently played Maria on ‘The Sound of Music,’ and people didn’t even say she was playing ‘Maria,’ they say ‘Julie Andrews!’”

“Singin’ in the Rain” was a postwar film created to uplift people’s spirits, a sentiment that surely remains relevant to the day. It’s a period piece, yes, said resident director Anton Luitingh, but they’ve “created a world that’s energetic and youthful that keeps young people going, ‘Wow, I didn’t know theater can be like this, that theater can be this funny and magical…’

“What’s wonderful about this piece is that we don’t have any fancy chandeliers coming down, we don’t have the ‘Cats’ tire going up into the air. What we do have is a magical piece of theater where the actors are what really make this piece work. We don’t rely on a huge technical wow factor, besides the rain.”

Van Wyk added, “The choreography of this is so different. They say if you pretend to smile, eventually you will actually feel happy. There’s something in this choreography, it’s just so happy-making.”

That, as long as—just like the actors advised—you don’t slip, on stage and in real life.

“Singin’ in the Rain” is presented in Manila for a limited period beginning Aug. 20 at The Theatre at Solaire by David Atkins Enterprises, Michael Cassel Group, Concertus Manila, Dainty Group and Lunchbox Theatrical Productions with Visa Entertainment. For tickets, visit www.ticketworld.com.ph or call tel. no. 8919999.