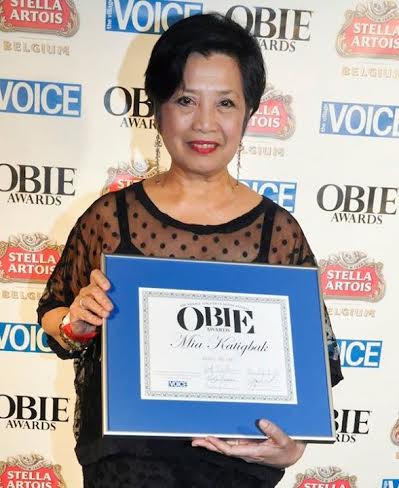 Mia Katigbak with her 2014 Obie forBest Performance for “Awake and Sing!”PHOTO FROM THE NATIONAL ASIAN AMERICAN THEATRE COMPANY FACEBOOK PAGE

Watching plays written by non-Asians about non-Asians but played by Asian actors may be normal in the Philippines. For obvious reasons, it’s not too common in the United States.

But the National Asian American Theatre Company (Naatco)  in New York has been doing just that for 25 years now.

To kick off its silver season, the group recently restaged its 2013 production of Clifford Odets’ “Awake and Sing!”—a 1935 drama about a lower middle class immigrant Jewish family set in the Bronx during the Depression era. (“Wonderful performances,” raved The Huffington Post. “These actors… bring full value to the words… A strong production.”)

Katigbak reprised her role as monster matriarch Bessie, for which she had won The Village Voice newspaper’s 59th Obie Award 2014 (theater awards for Off-Broaway and Off-Off Broadway productions) for best performance.

Katigbak didn’t jump at the chance to form the group when co-founder Richard Eng, also an actor, pitched it to her. She’d already been doing stage work with Pan Asian Repertory Theatre and had seen how difficult it was.

“But after Richard agreed that the primary focus of the company would be European and American classics with all-Asian-American casts, I came on board,” she says. “I was increasingly frustrated with the lack of opportunities for acting in the classical canon for trained actors who are Asian-American, like me.”

In a previous interview, Katigbak said, “We don’t get to do [these kinds of roles]! If [doing these roles] becomes the foundation of the company, so that we get perceived as technically skilled, then there will have to come a time when people will say, ‘Oh right, we don’t have to just cast them as Asian gangsters and gooks.’

“I wanted to… develop a very large pool of acting talent so that it becomes undeniable that we can do this stuff, and hopefully other people would start casting these folks from our shows.”

As such, the group aims to “more accurately represent onstage the multi- and intercultural dynamics of our society… [and] demonstrate a rich tapestry of cultural difference bound by the American experience.”

Katigbak says part of the group’s mission is “to increase awareness among non-Asian-Americans about our contributions to American culture,” and also to point out what “Asian” means. “We can go as far east as Japan, as south as Indonesia and all the way west to Turkey.

All that focused work has gained recognition. The group received the 2006 Rosetta LeNoire Award for “increasing diversity and non-traditional casting in American theater,” as well as the 2012-13 Lucille Lortel Award.

“After our production of ‘Falsettoland,’ one of the actors, Christine Toy Johnson, got a recurring role in a soap opera and I don’t think her character was [meant to be] specifically Asian,” said Katigbak. “Our other alums such as Daniel Dae Kim, C.S. Lee, Joel de la Fuente and Ann Harada have all played roles that are not ethnic-specific.”

Born and raised in Manila, Katigbak and her parents moved to the US when she was 11.

“I recall wanting to do theater since I was about 5 years old,” she says. “I was surrounded by musicians and dancers in Manila because my mother Adelaida Reyes was a musician and then a music critic [for Philippine Evening News and Manila Daily Bulletin], but theater was always, somehow, in my DNA. There was no ‘Aha!’ moment, I was just always doing it.”

Katigbak has acted extensively with different groups in and outside of New York. She received the New Dramatists’ Charles Bowden Actor Award in 2006.

Her advocacy for Asian- Americans in theater reaches beyond Naatco. She was one of the organizers of the first and second National Asian American Theater Festivals in 2007 and 2009.

Look to the future

For its next production this season, the group has commissioned Lloyd Suh to adapt Agatha Christie’s “The Mysterious Affair at Styles.”

“Its working title is ‘Charles Francis Chan’s Most Exotic Oriental Murder Mystery,’” she says. (Suh’s “American Hwangap” was staged by Tanghalang Pilipino in English and Filipino in Manila in 2010.)

“Our 25th anniversary is a milestone, just for the sheer fact that we have survived that long. I believe we enjoy the fortunate reputation of doing good work, no matter what we do, and that’s a good thing.”

“The anniversary affords me the opportunity to assess what Naatco has accomplished thus far, and it is a good place from which to look to the future. To concoct other strategies for Asian-American representation, visibility and dynamism on the American stage. To reach other constituencies beyond the usual and to forge more meaningful partnerships with other non-Asian-American theater artists and organizations.”