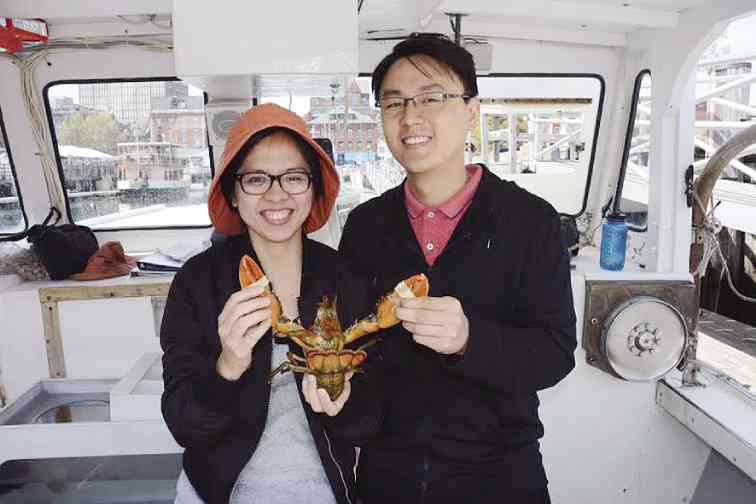 From the time Bun Appetit opened, we’ve been obsessed with anything and everything lobster.

We first had lobster rolls in New York but it’s no secret that this delectable shellfish dish originated from New England. Lobsters are greatly associated with Maine, so during a recent East Coast trip, we made sure to make the state a part of our itinerary.

We booked a lobster fishing tour with Lucky Catch Cruises, a tourist boat that takes in passengers during the summer but catches lobsters commercially for the rest of the year.

We took the Portland Headlight lobster cruise, which goes to the most picturesque spots around Casco Bay in Portland, Maine.

Our captain, Dave, and his lady mate, Jessica, made the tour very interactive. Upon boarding the boat, we were asked to suit up with rubber overalls and gloves because each passenger gets to take part in the lobstering process. Since we were already in full lobsterman gear, a quick photo op was just appropriate. A professional photographer hopped on board to take snapshots of everyone; the photos were to be claimed at the end of the cruise.

The first step was to fill up mesh bait bags with herring. This type of fish is oily and has a strong scent that attracts lobsters.

Capt. Dave then pulled up by the first buoy along our route. Since the Lucky Catch boat goes on many trips in a week, the crew has already set up several traps a few days in advance.

Every lobsterman uses a unique-colored buoy for easy identification. The ones that belong to Lucky Catch had red and green stripes.

We were lucky that the first trap had a couple of lobsters in them. But they weren’t keepers because they were less than the legal size of 3.25 inches from the eye to the end of the carapace (the hard surface just before the tail).

Maine lobstermen practice self-regulation to ensure the industry remains sustainable. Small lobsters are thrown back to the water and allowed to mature.

Lobster traps don’t just catch lobsters. We were able to get some starfish, Jonah crabs and a lot of sea kelp, all of which were thrown back to the bay.

After emptying the traps, the old bait was replaced by the bags we filled with herring at the start of the cruise. The empty traps with fresh bait were thrown back to the water to be hauled again in about two to three days by a future batch of Lucky Catch passengers.

The contents of the old bait bags were thrown away, not to go to waste but to be eaten by seagulls that were flying by too close to the boat and did not seem to be intimidated by humans at all.

A total of eight traps were hauled for the entire duration of the cruise. Each haul was exciting because we did not know exactly what we were going to get.

We also got to try securing the claws with rubber bands. The captain said being pinched felt a lot like slamming a car door on your finger. This part we did not try, we just took his word for it!

The bands also protect the lobsters from fighting with each other when inside the tank.

Lucky Catch is not just about lobstering. It’s also a good way to see the sights by the bay. We were able to see Civil War structures such as Fort Gorges and Fort Scammel up close.

It was a shame though that we did not get to go near the Portland Head Light, a popular attraction said to be the most photographed lighthouse in the country. The current was already getting strong when we got to that part of the bay.

At the end of the cruise, passengers were given the option to buy the lobsters caught for a special wholesale boat price of $7-8 apiece, depending on the weight. We took ours across the pier and had them cooked at the Portland Lobster Company. It was one of the most delicious things we’ve ever eaten!

The reviews on Yelp.com are right. We thoroughly enjoyed our lobster fishing experience. The cost of $30 per person was worth every penny. We highly recommend it to anyone who has the slightest interest in lobsters!

Just a few things to remember: There are no bathrooms on the boat so make sure to go before the 90-minute cruise. Participate as much as you can. The crew asks for volunteers for every step. Don’t be afraid to get your hands dirty.

Bun Appetit will be at Salcedo Market in Makati from 7 a.m. to 2 p.m. this weekend and at The Red Light (W Young Building, Felipe St., Burgos Makati, near El Chupacabra) from 7 p.m. to midnight on Aug. 15, 22 and 29. It will serve lobster, crab and shrimp rolls, garlic noodles and Mexican corn.