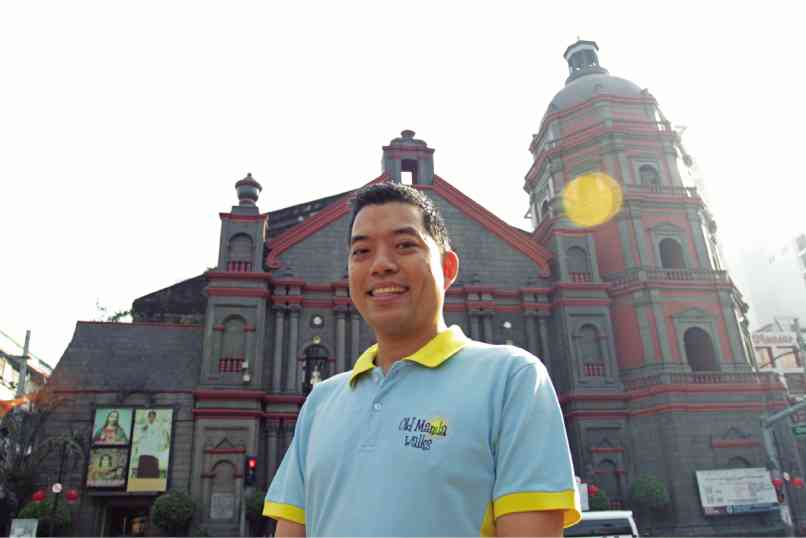 IVAN Dy grew up in Binondo, worked as volunteer at the Bahay Tsinoy Museum for 10 years while still in high school, and studied at St. Jude in SanMiguel near Malacañang.

More than 10 years ago, Ivan Man Dy returned from an unsuccessful attempt at further studies in Toronto, Canada; he had “made lakwatsa” and done odd jobs instead, he admits with a laugh.

In 2005, he guided his first one-on-one client around Binondo.

“I still remember her,” says Dy.

Thus began Old Manila Walks, what has now become one of the city’s most reliable and “educated” urban tours, which marks its 10th anniversary this year. Dy credits a 2005 Inquirer feature for landing him in   the spotlight.

Dy has come a long way since the young fellow in the Mandarin hat with a pigtail, and now leads a lean, mean operation recognized internationally and by local tourists, who make up 80 percent of his clients.

In 2008, he played guide to world-famous foodie Anthony Bourdain, whom he took to sample lumpia and taho.

“I wanted to portray the city as something of a multi-ethnic dining experience, so we went to Binondo and Farmers. It was very spontaneous.”

Old Manila Walks is also listed in international travel guides like Lonely Planet and Rough Guides, and has been featured on the Discovery and History channels.

“The tour has improved, been streamlined over the years,” says Dy.

“Before, we wanted everything—heritage, buildings, history—which could be too much for some people, so we tweaked it to make it easier and shorter. And then I woke up 10 years later with more wrinkles, and no more hat—we’re more professional now, we even have a uniform!”

To be sure, Dy didn’t get into this, his passion, unprepared. Although he worked for the family lighting business after his return from Toronto, and earned an Industrial Design degree from the College of St. Benilde (CSB), he was a self-confessed “Manila Boy” through and through.

He grew up in Binondo, worked as volunteer at the Bahay Tsinoy Museum for 10 years, even while still in high school and studied at St. Jude in San Miguel near Malacañang for 13 years.

“Tambayan ko yung Malacañang, back when you could pay P10 and enter,” says Dy.

The tours started as something very personal, as he grew up in this milieu. “History and culture were ingrained in me as I grew up. I was fascinated with old houses, and even before I could afford them, I was buying books.”

Already a member then of the Heritage Conservation Society

—he now sits on the board—Dy remembers taking the jeepney from CSB to join rallies when the Jai-Alai Building was being demolished. “I worked in a museum, but here was the biggest museum of my life, my city,” he says.

His first tours covered Binondo, the Chinese Cemetery and the San Miguel area.

Today Dy has not rested on his laurels; he began working on his master’s degree in Cultural Heritage Studies at the University of Santo Tomas, and is due to finish his thesis, a tourism plan for Binondo, this year.

“We call ourselves ‘smart tours,’” he declares unabashedly, “because we’re research-based. We do school tours, we can be academic if we want to be, according to what the students’ lessons are—migration? The effects of colonialism?”

They’ve done a lot of creative corporate events as well; Dy once led a tour that was actually a product launch for a deodorant, testing how well his group could manage the brisk walk around Manila.

Indeed, Dy may be credited for having made Binondo “hot.” “If there was a position for cultural and tourism officer of Binondo, I’d apply for the job!” he says.

It helps that Dy also knows his market. “Some tourists just want to go and take a photo, and there are others who listen and want to know more about the place. We’re an educational tour outfit, with all of our passions thrown in.”

“It’s part of our tourism campaign for Binondo,” he explains, “so that after the tour, we give you a map, and you can come back. It’s done with a lot of love.”

So, how has Binondo changed over the last 10 years? “I’ve seen many more people go there; I never used to see people going on field trips, but now there are busloads,” says Dy.

“There’s more awareness of the potential of urban/ethnic/cultural tourism,” he adds. “After all, Binondo is one of the last few places in Manila where you can have an authentic neighborhood feel, not sanitized like in a mall. There are shops, lots of people still live there, it’s a functioning part of the city; there’s a community, which is very important in developing tourism areas. You don’t want to lose that.”

Dy dreams of doing bigger tourism planning projects outside Manila, as he is also fascinated with small towns. “I’m just lucky I found what I wanted to do. I make a decent living, but it’s more about being fulfilled when I wake up.”

Doesn’t the tension between China and the Philippines worry him? “I like to think it’s not affecting things,” he says. “The subject tackled in our tours is ethnic Chinese culture and traditions within the context of Manila’s history. The Binondo Food Wok is more about interethnic heritage sharing and understanding, and less about current geopolitical issues.”

So where would the ultimate Binondo authority take you for a good bite? There’s the oldest restaurant, Toho, which has been around since 1888.

“There are several Binondo restos over 100 years old,” he says, “and I call them panciteria throwbacks—serving hototay, camaron rebosado, atay con goto, the Chinese-Kastila-Tagalog food.”

He would bring a balikbayan to eat oyster cake at Sincerity, to King Chef at Lucky Chinatown Mall for half-price dimsum at 9 p.m., Quan Yin Chay for vegetarian food, Awi for lumpia, Royale Seafood for lauriats and Masuki for siopao.

A final word: “Don’t judge a restaurant by its façade. I once ignored this place because it was on an alley, until I tried the food when it catered for an event—and I was blown away!”