Why the Tantocos have remained the first family of luxury retail–with emphasis on ‘family’ | Lifestyle.INQ ❮ ❯ 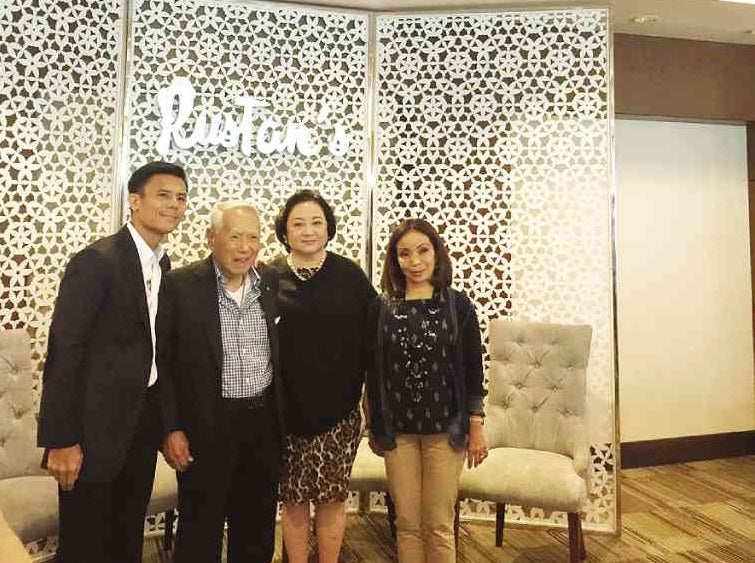 In a relished, prolonged manner, Donnie Tantoco let out that jubilant “yes,” complete with celebratory hand gestures, as we stood up from the table after dinner last Friday in Cebu.

There couldn’t have been a better way to cap a dinner after a long day. Donnie just got the text message saying that that Friday, the opening-day sales of Rustan’s Cebu had surpassed that of a Metro Manila Rustan’s store.

That was music to the ears of Donnie and the other Tantoco scions at our table—brothers Eman and Dino Tantoco Pineda, and siblings Michael and Catherine Tantoco Huang.

Like Donnie, now the Rustan’s president, they belong to the third-generation Tantocos who are not only active in the growing Rustan’s conglomerate, but are also progressive enough to leave their mark on the retail business that has now diversified from fashion and home to food.

Heading the next table in the Cebu restaurant was Rustan Commercial Corp. chair and CEO Nedy Tantoco, with SSI Group Inc. President Anton Huang, a leading third-generation Tantoco who spearheaded the successful IPO of the SSI Group last year; and Maritess Tantoco Enriquez, a second-generation Tantoco who has helped shape the family’s retail business here and abroad, and who, as gemologist, leads the buying of the store’s jewelry brands.

That Friday the third-generation Tantocos, led by Donnie, were busy following the directions of Nedy, who was on top of the Cebu opening—down to the last detail, with her characteristic fastidiousness.

More noteworthy was the presence earlier that day and later at the opening cocktails of the Rustan’s patriarch, Ambassador Bienvenido Tantoco Sr., who, at 94, is still able to attend most of Rustan’s and SSI events.

Over lunch that day at Cebu Sports Center held to welcome the media covering the Rustan’s Cebu opening, the elder Tantoco told us about how two of his great grandchildren have recent newborns and how he delighted in the news.

Expectedly, while he has the physique and slow mobility of a man his age, he apparently still knows what’s going on—still so in the moment, as the saying goes. “Cebu welcomes us so well,” he told us, “and we’re grateful.”

Sixty-three years ago, Tantoco and his wife Glecy started Rustan’s, which, in the next decades, would pioneer in and dominate the high-end retail business in the Philippines.

In the ’90s, Rustan’s expanded to more luxury brands, through Stores Specialists, Inc. (SSI), which brought in majority of the global fashion brands. Also in the ’90s, the family brought the Starbucks chain to the Philippines—this, as it expanded its supermarket chain business (notably Shopwise).

About five years ago, the family went into a joint venture with Ayala to start the Family Mart chain in the country. And last year, the SSI Group had its IPO.

Glecy—whose vision and strong pulse of market gave rise to Rustan’s—died in 1994. To this day, her heirs and staff emulate her traits—indefatigability, incessant ability to network and make friends (starting in the era of then first lady Eva Macapagal), and, most of all, her uncanny nose for what would sell.

After her death, Ambassador Tantoco, an accountant and management executive (with the Rufino group in the ’60s), who had always been supportive of his wife, took sole reins of the business, assisted by his children and then grandchildren.

It must be noted that the strides in the retail industry—the expansion and diversification of Rustan’s—were made by the second- and third-generation Tantocos, under the direction of the elder Tantoco.

The clan bucks the common notion of family businesses—how the first generation makes it, the second expands it and the third squanders it.

In the case of the Tantocos, the third generation apparently isn’t squandering it at all. It is taking the business outside of the comfort zone, as it were, to other great opportunities in retail.

And—as if taking the cue from their grandparents and parents, the third-generation Tantocos have media savvy. Not only do they have rapport with media, they are also comfortable doing it. Unlike other big business/industry clans, they are accessible.

It is noteworthy how, even with seasonal talk of divisions within the family (such as when the luxury store Adora was opened), the clan is able to consolidate, reconsolidate and expand, going from strength to strength.

How do they do it?

At that Friday lunch, we asked Ambassador Tantoco how he’s been able to keep the family unity and strength. He replied as if doing it was the most natural thing on earth. With his trademark smile, he said that he just kept his children and grandchildren around him. “I see them. They’re with me,” he told us.

In fact, the Tantoco story isn’t so much a lesson in Philippine business, as it is on the Filipino family. How does one keep the members together, through the highs and the lows, through thick and thin?

“My dad is a family man, even as we were growing up,” recalled Maritess, the youngest of the elder Tantoco couple, over a casual chat last Thursday.

“Just to have his children and grandchildren around, he would think of something. He’s always entertaining us.

“And he believes in always giving people an opportunity. When he served as ambassador in Rome, he told his children that he could have some of his apos with him in Rome and he would support them through school there.”

That was how Donnie, Anton and Joel—cousins with close age proximity—came to live with each other and nurture a closeness that has served them well in business through the years, to this day.

There are two days in the year when the entire Tantoco clan is together, come what may: April, to celebrate the father’s birthday and Christmas Eve.

“Our in-laws knew beforehand, that Christmas Eve, we must spend with my lolo,” Donnie told us.

These days, the children and the grandchildren have their weekly schedule of lunches or dinners with him. “There’s never a moment of the day in his house that he is without family,” said Maritess.

Maritess, who visits with her dad almost every day and goes with him on trips, makes an informal calendar where family members take turns having meals with the patriarch.

The eldest grandchild, Donnie, who’s the most avid disciple of his grandfather, has breakfast every Wednesday with his lolo. This is when he listens to his lolo’s stories and advice—on everything, not only business.

“Lolo told us, never rule by fear,” said Donnie. “You will get better and lasting results when people respect you.”

Maritess has her own take: “Dad would tell his grandchildren, you can hire the best doctors, the best lawyers, but you need to run the business yourselves, so get a good education.”

And so they did. Donnie was effusive when talking about his cousins: “They’re all very entrepreneurial. And the talent.” At the table, he cast a glance at Eman, one of the country’s top style visionaries. After Tyler and Harlan+Holden, Eman is now working with his aunt Nedy and Donnie to reintroduce Adora under Rustan’s. (Eman is the president of Adora Retail Philippines Inc. and Republic Retailers Inc.)

And so it was from this family dynamic and perspective that a much bigger Rustan’s Cebu reopened Aug. 7 at Ayala Center, an expansion from the original 2.5 sqm in 1995 to today’s 12,500 sqm (department store) and 4,500 sqm (supermarket space). (Rustan’s opened in Cebu in 1981, on Mango Avenue; this was the pre-mall era in Cebu.)

The total 17,500-sqm space, Nedy said at Friday’s press lunch marking the store opening, “is a significant investment that shows our stalwart belief in the growing Cebu economy.”

SSI Group Inc. President Anton Huang would tell us later that day, “We’ve long wanted to expand in Cebu, so when Ayala expanded its malls, we saw this as a great opportunity.”

Rustan’s Cebu must be one of the best curated Rustan’s stores in the country today. From the ground floor to the third level, it’s evident how well thought-out the merchandise lay-out, the flow of the eye, the movement of shoppers are: clean, clear and impressive, without being in your face.

Nobody could have put it better than Nedy: “Retail is detail.”

It is said that Nedy herself oversaw the development of this store, assisted by son Michael, Rustan’s vice president for store planning and expansions.

The main entrance on the ground floor opens to the iconic beauty and cosmetics brands such as Chanel, Laura Mercier (try its oil-free photo foundation, perfect for the Filipina skin), Dermalogica and fresh fragrance finds (check out the colognes from Provence; Nature is our favorite).

It leads to the men’s section that includes Ascot Chang, Bergamo and Montblanc, as well as footwear from Kurt Geiger. (This is perhaps derived from the retail belief that men don’t have the patience to explore when shopping so their stuff must be on the ground level, although that is fast changing.)

The second is the Ladies floor containing the premium fashion brands Rustan’s has been known for, and the jewelry lines starting with the Silver Vault, which, we would learn, has been doing well in Cebu. (To the Cebuanos, shopping must be an investment as well, not just therapy.)

According to Donnie, his aunt decided to put a Bags gallery on this floor. As usual, Nedy is spot-on. We strayed from the media pack and beat the trail to the Bags.

Nedy also set up a Denim Gallery. The Ladies has both for the mature and young shoppers.

The third level, to us, is the piece de resistance. It brought to Cebu the strengths of the Manila store—Bernardaud, Lalique, Royal Doulton, Lenox, Bugatti. It should be interesting to see if the Cebuano shoppers will stop flying to Manila or Hong Kong just to get these brands.

This floor also holds the children’s fashions and playthings.

“They say it’s hard to make Cebuanos buy on impulse,” Donnie said at the press luncheon. “So we bring to Cebu only the finest.”

“We owe all of this to them (lolo and lola),” said Dino Pineda, board director of the SSI Group Inc. “It’s their foresight. And now it’s our heritage.”